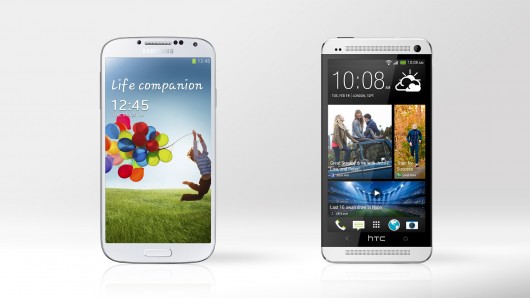 The HTC One M7 and the Samsung Galaxy S4 are two of the most highly regarded smartphones of the year 2013, and still quite well-regarded two years later, too. Smartphones go out of fashion very quickly, with companies pushing new and improved models of the same flagship year after year. But some phones remain of interest to many people and remain popular among tech enthusiasts for their good performance, neat design, great features, outstanding battery lives and beautiful displays. The HTC One M7 and the Galaxy S4 stand out with a few of these features, although neither of them can satisfy all of the above-mentioned appealing trait requirements. Nonetheless, both the HTC One M7 and Samsung Galaxy S4 are still considered to be great daily drivers by most people out there. Let’s see what makes these two phones unique and find out how come they can handle 2015 usage after two years.

First off, you should duly note that these phones are already two years old, which means that they already have successors that perform better than they do. But that doesn’t mean that these phones cannot be used in a contemporary context, seeing as they still boast with far better features than current low-end and mid-range phones do. As such, you will get top-notch performance out of these babies regardless of which you choose. Still, one is better than the other, based on its features, design, price and performance. Read on to find out whether the Samsung Galaxy S4 takes the throne for bang for buck champion or the HTC One M7 slides in front of it.

HTC One M7 vs Samsung Galaxy S4 – Design and Display

The HTC One M7 is one of the first metal-clad smartphones with a full metal unibody that is cool to the touch and looks as premium as current generation phones like the Galaxy S6 and the HTC One M9. Although the difference in build quality between the 2013 HTC One M7 and current premium smartphones is noticeable, the One still manages to look and feel like a premium smartphone. It comes with a 4.7 inch FHD display with a 1080*1920 resolution that adds up to about 450 ppi pixel density. Although the display is pretty good, the fact that the bezels on the top and bottom of the phone are rather large might be unsettling to those who have become accustomed to the thin bezels that dominate the market nowadays. There’s little difference between the screen to body ratio of the HTC One M7 and that of the HTC One M9, so we can consider the thick bezels to be an HTC design trait that we will keep seeing in future phones. The good thing about the big bezels is that they do hide BoomSound speakers, which are the best speakers for smartphones still. 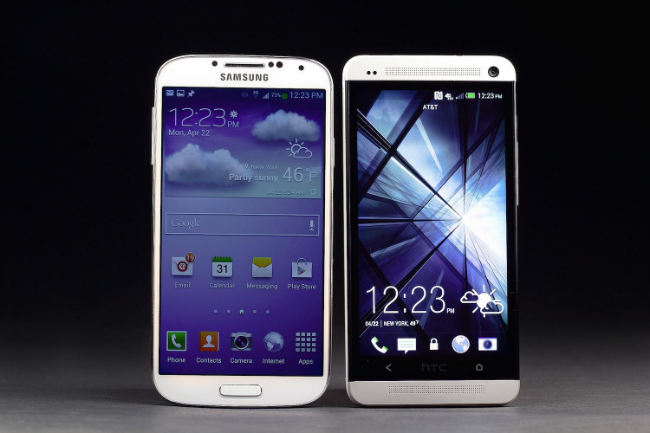 The Samsung Galaxy S4 is nowhere near as premium as the HTC One M7, seeing as it still follows the usual Samsung design language that focuses on plastic. Its entire body if made of plastic and the faux chrome finish of the frame is nothing more than disgusting after a few months of use. The chrome chips off easily and makes the Galaxy S4 look worn and torn, although it’s not. That issue can easily be fixed with a skin or a case, and you can find a lot of awesome ones online, for less than $50 and they’ll keep the Samsung Galaxy S4 looking perky for long, so I wouldn’t consider the design flaw (it is a design flaw, in my opinion) a major one since it is easily mended by a small investment in a case or a skin. The display of the Galaxy S4 is bigger than that of the HTC One M7 though, as it is a 5 inch 1080*1920 resolution Super AMOLED panel. The Super AMOLED panel of the Galaxy S4 is rather power efficient and looks surprisingly good, so it has the one-up over the HTC One M7’s IPS display. This round is a tie: HTC One M7 gets the design trophy and the Samsung Galaxy S4 gets the display trophy. Which you choose is now all up to personal preference.

Saul BowdenMarch 27, 2017
Read More
Scroll for more
Tap
Sony Xperia M4 Aqua vs Xperia Z3 and Plus – underwater battles
Samsung Galaxy Note 4 vs Galaxy S6 Active – out with the old, in with the new