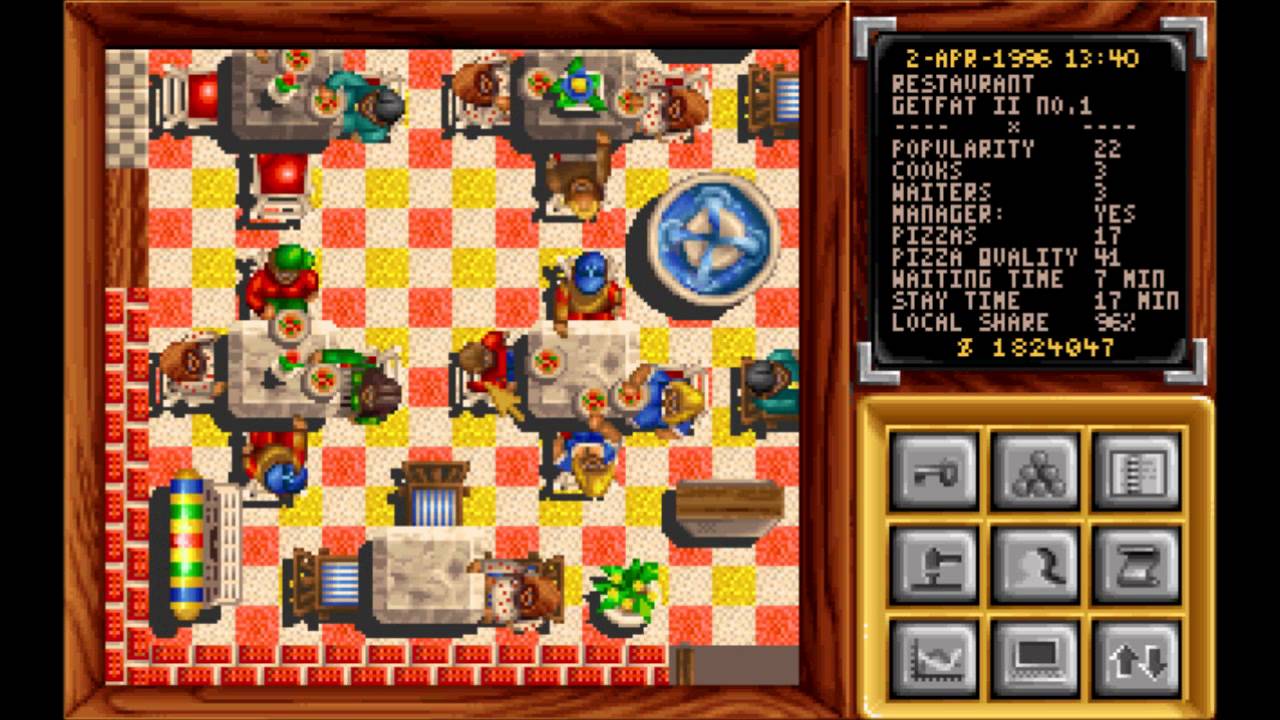 “Maaaaam, what’s goat cheese?” I asked despite the answer being self explanatory – it was cheese from a goat. But 12 year old me didn’t know better. I thought milk and cheese were purely bovine exports. What prompted me to ask such a baaaaaahhhhdly obvious question?

Pizza Tycoon. Developed in Germany and released by Microprose in 1994, Pizza Tycoon has immense energy, charm, and a pizza-creation feature that is the coolest thing since stuffed crust. Experimenting with ingredients and combinations of meats, cheeses, veggies, spices, and fruits is a delight, and seeing how your concoctions are rated by the low brow, high brow, blue collar schlubs, kids, and chefs of the virtual world was worth the price of admission alone.

I’ve heard it before and I’ll say it again – the very best games are almost always toys, too. Meaning you play them, or play *with* them. You can live a virtual life in The Sims, or create a doorless poop dungeon and watch your creations wallow in their own literal crapulence until they turn on each other and die. You can build the world’s best theme park in Rollercoaster Tycoon, or develop a series of rides designed to throw people off the rails at 150 miles per hour to your macabre delight. Pizza Tycoon’s ability to indulge your inner pizza pie chef is no different.

What is different from other “Tycoon” games is this title’s scope. The greatness in Pizza Tycoon is that it’s more tangible than other ‘Tycoon’ games by a wide margin – and that’s why it gets a ‘great games’ entry before more popular and ‘better’ games in the genre. I’ll never run a railroad or build a theme park, but I can go out and craft my highly rated Van Gogh pizza – all I need is a Whole Foods supermarket, a little spinach, a few pears, some cherries, my precious goat cheese, dough, and I’m golden.

But like many important  movies or books or comics from ‘golden’ eras, Pizza Tycoon’s greatness comes with caveats. Similar to how we all tend to forget Tony’s attempted rape of his dance partner in Saturday Night Fever*, or must begrudgingly acknowledge that the heroes of the fundamentally important to cinema film ‘Birth of a Nation’ were KKK members, Pizza Tycoon is not without serious issues that need to be accepted while appreciating it. The game is obtuse and does not hold your hand, doing a very poor job of explaining the hows and whys of properly opening and starting a pizza shop in game.

Without a manual or walk through, it took me intermittent playtime from that fateful day in the late 90s to last freakin’ week to achieve any sort of successful results. It turns out the issue wasn’t my lack of restaurant management expertise, but rather my legally murky way of starting it. The game’s copy protection comes in the form of customer taste. When creating your menu, in addition to making your own wildly tasty concoctions, you can select from a range of ‘standard’ pizza recipes. *But* you’re required to create it according to a specific recipe before adding them and those recipes are in the physical game manual. Which I ‘misplaced’. Yes. ‘misplaced’.  Without a ‘standard’ pizza, your restaurant will never have customers. Thankfully I learned about PizzaTycoon.org, and that problem can be avoided from now on.

But this isn’t the only problem, In addition to your pizza shop duties, the game features the mafia, dozens of celebrities cameos, secret missions, an economy with inflation, consumer trends, depressions and booms, staff training, ad-copy generation mini-games, and weird dudes with ant heads for faces. This game is oftentimes so bizarre you’ll have to stop and remind yourself no you didn’t eat a bad mushroom – and eeking out a profit is often times difficult and frankly impossible if you select a poor location.

Pizza Tycoon is great because it entertains and educates and frustrates like many of the best games, and teaches the importance of spices, the world of cheese beyond the sliced and individually wrapped American variety, the calorie content of various red meats, and countless other details a kid at the dawn of the internet era would find fascinating. It’s also very contemporary for its time, with phones and jokes and references that were modern in 1994, but in 2015 turn the game into something of a period piece.

If you want a look at the foundation of the business management sub genre of gaming, check this one out. While you may never be a tycoon or own mall or plan a city, it’s entirely possible to stumble across a recipe you want to try in real life, and heck starting your own real pizza joint may actually be easier than doing the same thing in this great, important, admittedly flawed, but fantastically entertaining slice of gaming history pizza.