Dragon Ball Z: Resurrection F was just released in theaters in the United States so I suggest you go watch it asap if there’s a place near you that’s playing it. Resurrection F has actually been around since April, but if you’re one of the people who doesn’t like to read subtitles then you’ve probably waited for English dubbed version, complete with the instantly recognizable voices of Chris Sabat’s Vegeta and Seán Schemmel’s Goku. As fate would have it, I recently had the pleasure of discussing with mister Sabat about the new movie and also about his work in general.

Since I literally grew up with Chris Sabat’s voice in my head while watching DBZ and other anime as a kid (and as an adult), it’s been an honor to do a short interview with the man and talk a bit about his impressive career and about the industry as a whole. After pulling a fast one on me and making me believe I got the wrong number and was actually calling for a Starbucks interview, Chris Sabat was nice enough to answer a few questions for me. Naturally, I just had to share the whole thing with you guys as well. I’ll spare you my weird accent and just give you a written version of the full interview below. Enjoy.

I know you worked on a lot of popular anime series including Fullmetal Alchemist, One Piece, Fairy Tail, Attack on Titan and of course Dragon Ball; have you also worked on video games or any other types of media?

Chris Sabat: “I have, I own a studio in Dallas called OkraTron 5000 and we specialize in voice-over for video games.”

Can you tell us a few video games you worked on?

Chris Sabat: “I’ve done lots of voices on Borderlands, Borderlands 2, we’re working on Battleborn right now, several voices in a game called Smite. I was Alex [Denton] in Deus Ex: Invisible War, I was Captain Smiley in a game made by Twisted Pixel called The Adventures of Captain Smiley. I’ve done voices in Tony Hawk, I’ve done some pedestrians in Saints Row: The Third, and of course the Dragon Ball games, too. 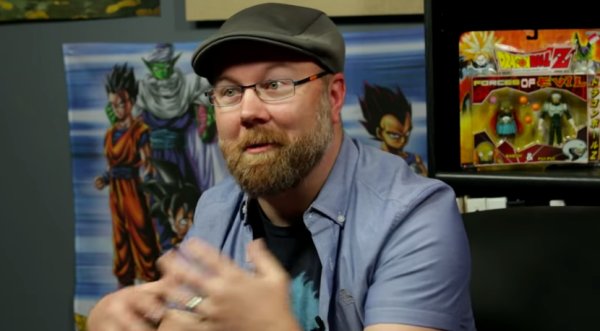 Chris Sabat has been doing voice work for a great number of anime series and video games since the late 90s.

Did you also do voice work for TV shows, or maybe film or western animation series?

Chris Sabat: “I haven’t been lucky enough to get cast on one of those yet. A lot of that’s done in California and I work exclusively in Dallas so that’s just not the type of stuff we do in Dallas.”

I’ve heard a lot of people say that watching English dubbed anime takes away a bit from the experience, what would be some good counter-arguments to these criticisms?

Chris Sabat: “Oh yeah, I have a suggestion – don’t watch that! No, no, just joking. What we do is we offer an option to people who don’t want to watch the subtitled version of it and I’m never offended when people say they like the subtitled version because those are the people who would want to experience the anime in its absolute truest form. But there’s some people who actually don’t want to have to read subtitles and watch it and just enjoy it like they’d enjoy any other show, and for those people who are just wanting to casually watch it and enjoy it for what it is, that’s what we dub them for, we dub them so you can enjoy them without having to read a bunch of subtitles.”

Doing voice work for an anime like Dragon Ball where you have to yell a lot must be really punishing for your vocal cords, are there any specific exercises you do before recording?

Chris Sabat: “I do, but there’s not a whole lot you can do to prevent vocal damage other than just being very careful about what you do when you’re screaming. I have to use really good techniques and you kinda have to know what your limits are because if you’re screaming past beyond what your limits are then you are going to blow your voice up for a few days and you can cause some damage.”