How to pick the perfect smartphone 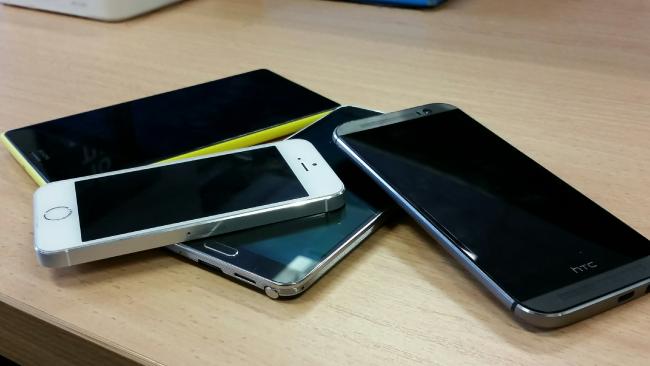 How to pick the perfect smartphone

With a saturated smartphone market combined with millions of dollars worth of marketing leaves the consumer dumbfounded at the end. Everyone is saying that their products are the best, and even if we start doing our own research, it’s hard to differentiate between sponsored posts and honest reviews. Most reviews nowadays are sponsored, because how else could bloggers and anyone besides big news outlets afford a $700 phone each month? It’s a circle we won’t be getting out of anytime soon. However, that doesn’t mean we have to confide in what the commercials tell us when choosing our new smartphone.

We’ve compiled a guide on picking the perfect smartphone for the average consumer, focusing on the steps that everyone can consider before actually putting money down or signing any contract. People often find themselves undecided about smartphones and even more don’t even know how to choose a phone that’s right for them. Most of the times we are overwhelmed with all the choices and get bored, oftentimes settling to get it over with. And that’s with unlocked phones; carriers can complicate things even more.

Anyhow, choosing the perfect smartphone for you can be difficult, especially if you’re just getting into mobile tech and it will be your first smartphone, for whatever reason. Veterans in mobile tech also find it hard to pick the perfect smartphone out of the millions of options out there, because needs and how they’re met is a process that’s hard to identify when it comes to smartphones. There are many things we should pay attention to when picking a new smartphone, but here are a few of the most important ones you should consider before buying one.

The first step in choosing the perfect smartphone is deciding what OS you want to make use of. The operating system of a smartphone determines what kind of apps and services you will be able to use and what ecosystem your device can be part of. Oftentimes, this is the most overlooked and yet most difficult step in picking the perfect smartphone, because few people who use smartphones actually have the know-how to understand the inner workings of software. That shouldn’t be a problem however, because modern operating systems can be easily identified and categorized thanks to the enormous advancements in software development.

iOS is the exclusive OS to Apple iPhones, so if you want to go for an iPhone, you will be stuck with iOS. Today, Apple’s own OS is at version 9 and the 10th version is anticipated to land sometime next year. There are pros and cons to iOS, but most of them have to do with company policy rather than the properties and features of the operating system itself. iOS is very user-friendly and first-time smartphone users will quickly become accustomed to how the software and user interface works.

That being said, the main benefit of iOS is its simplicity and streamlined performance – because it is faster than Android, most of the time – leaves room for a few cons, too. Being cemented in the Apple ecosystem brings some constraints with it to the smartphone user. iPhone users can’t customize their experience that much, they can’t really store anything on the phone unless they’re cool with using iTunes for everything – paying for everything, in the meantime.

Although iOS has progressed a lot in the past few years, ultimately the features that it comes with are behind what other operating systems have to offer. The restrictions that Apple sets on user experience can be disconcerting to someone switching from another OS and can be a turn-off for someone wanting to join the fun of owning a smartphone. Although iOS is a rather stable OS and it’s the best when it comes to software updates, it’s a mobile OS that’s suitable for beginners more than power users.

That doesn’t mean that power users can’t have a good time on iOS, but it does mean that they have to conform to the rules of the ecosystem.

Android is your next option when it comes to mobile operating systems. Android is the second most popular mobile OS in the world, after iOS of course. The benefits of Android are obvious in some areas, covert in others and missing altogether in some. Compared to iOS, the huge benefit of Google’s OS is that you can customize the hell out of it. You almost have no limits, especially if you’re a power user who likes to fiddle with software. If you’re willing to root your phone and risk bricking it, you can have a lot of fun with Android, since it’s open source.

Android isn’t as good with software updates, users of the OS always complaining that while Google announced a new version of the OS, say two months ago, 90% of the handsets on the market haven’t received the update. There are a lot of issues with smartphones running Android because of software updates, and that’s a bummer. Nexus phones bypass this issue, getting updates directly from Google, but those buying from other smartphone manufacturers have to rely on the companies to release updates or on their carriers, which is worse.

Google’s OS isn’t as private and secure as iOS, seeing as Apple is very keen on protecting each bundle of users’ data. It’s an admirable trait of Apple, and it would be nice if Google would allow for more security and privacy features in Android. However, there are more problems on this front than meet the eye. With new adware, malware, phishing scams, viruses and numerous other types of cyber attacks on Android emerging on a weekly basis, it’s hard to keep confident that Android is a safe place.

BlackBerry is an OS fit for business users and those who are mostly accustomed to it already. With awesome security features, all the encryption you would need and a lot of BlackBerry features, this OS is one of the best for work. If you’re more of a play kind of person, BlackBerry OS lacks a lot of apps and developers, and it’s not doing so well. However, the OS is still considered to be one of the best for productivity, so you should keep that in mind. With a fluid user interface and a lot of customization, BlackBerry OS can be a good choice, but it’s a risky one.

Windows 10 Mobile is the most advanced mobile OS, in my opinion, although it’s a lot less popular than iOS and Android. Windows 10 comes with universal apps, which means that the OS on a Windows phone is actually a full Windows 10 operating system. You can actually turn your phone into a full-blown computer with the help of peripherals and accessories. The problem with Windows 10 and Windows in general on mobile is the lack of apps.

There’s no Google ecosystem here, and Windows 10 needs to rely on Microsoft’s developers as well as third-party developers to make Windows 10 a fun place to be. At the moment, support for Windows 10 is lacking and many find that unless they’re not tied into the Google ecosystem, the OS is not right for them. If you are starting out with smartphones, Windows 10 could be a good choice, although you have to be aware that even popular platforms like Pinterest have so far refrained from releasing a native app for Windows 10. Nonetheless, things are bound to improve. Developers like the universal apps development platform that Microsoft put at their disposal, because they can design one app and see it run on computers, tablets, smartphones and who knows, even wearables in the near future, without extra effort.

Windows 10 is an excellent performer and most power users will appreciate the new and improved design of the user interface, compared to previous editions of Microsoft’s OS, such as Windows 8.1. With Windows Hello, the new security feature that uses biometric sensors to identify users, the Redmond giant added a new dimension of security to the mobile operating system and the desktop OS at the same time. That being said, Microsoft will collect a lot of data about you. Fortunately, you can work around that by modifying settings within the OS.

Most of them are much more private and secure than Android, iOS and Windows and offer smooth performance, as well as features unique to them. Each bear different design aesthetics in mind, but most of the time, they’re pretty similar to iOS and Android when it comes to the user interface. You can only do so much on a touch-based interface, you know. Your last option would be to disregard OS completely and choose the warrior’s path: install the firmware of your choice on the handset of your choice.

iPhones come with iOS, most Samsung phones have Android while some have Tizen, Lumia handsets come with Windows 10 by default and most big companies like LG, HTC, Asus, Lenovo, etc go the Android way when it comes to OS. Most companies release their flagships with Windows on board, too, although that’s not the case with Windows 10 right now. It might be in the future. The idea is that smartphone buyers are constrained by manufacturers: they can’t really choose their user interface for a particular phone they like. Advanced users can install their own firmware and custom ROMs to make their experience unique, but that comes with the risk of bricking your phone, so make a wise decision.