The meteoric rise of Ethereum has continued unabated over the last few weeks. Buoyed by Putin’s recent meeting with the founder of Ethereum and recent announcements that it’s backing group, the Ethereum Enterprise Alliance, has grown, Ethereum has gone from strength to strength. Is it possible that Ethereum be worth more than $1,000 within the next few months?

There are some indicators that this could happen. Ethereum’s market share has increased massively and it has gone from an altcoin that was not even within touching distance of BitCoin to within $10,000 of its competitors market cap. This rise is even more impressive when you consider that less than two weeks ago there was over $20,000 dollars in difference between the two.

These huge gains make it look increasingly likely that Ethereum could supplant Bitcoin and become the world’s largest cryptocurrency. If that is the case then there is every possibility that Ethereum be worth more than $1,000

Etheruem’s growth is more sustainable than other currencies like Ripple

There have been talks of other AltCoins breaking into the triple digits. Ripple briefly bounced to second place in mid-May before beginning a slow slide back to its previous values. So what makes Ethereum’s rise different? Isn’t there a risk that it will just peter out and begin declining, like Ripple?

Ripple saw explosive growth earlier in the year which has begun to tail off.

At first glance the reasons behind Ripple and Ethereum’s are not all that different. They both began to increase in value on the back of a flurry of new investors backing the currency. They both gained some of their bounce due to large corporate backers: In Ripple’s case the Japanese banking sector, for Ethereum it is the Enterprise Ethereum Alliance (EEA). So the question is; why has Ripple begun to collapse and Ethereum kept going strong?

The main difference is in the fact that Ethereum has grown in a slower more organic fashion, whereas Ripple’s growth was explosive. Ripple’s value was inflated by an influx of inexperienced investors and Ethereum’s growth has, so far, primarily been driven by Initial Coin Offerings and increased consumer confidence following a number of new members for the EEA. This solid foundation allowed Ethereum to keep growing while Ripple collapsed.

Could Ethereum really be worth more than $1,000 in a few months?

It is probably too early to say for sure but there is a precedent here. Bitcoin itself experienced a pretty remarkable rise once it saw more mainstream takeup and it looks as though history is repeating itself with Ethereum. The theory goes that if groups like the EEA can help to prevent any potential bubbles caused by initial coin offerings then Ethereum will become increasingly attractive to investors. 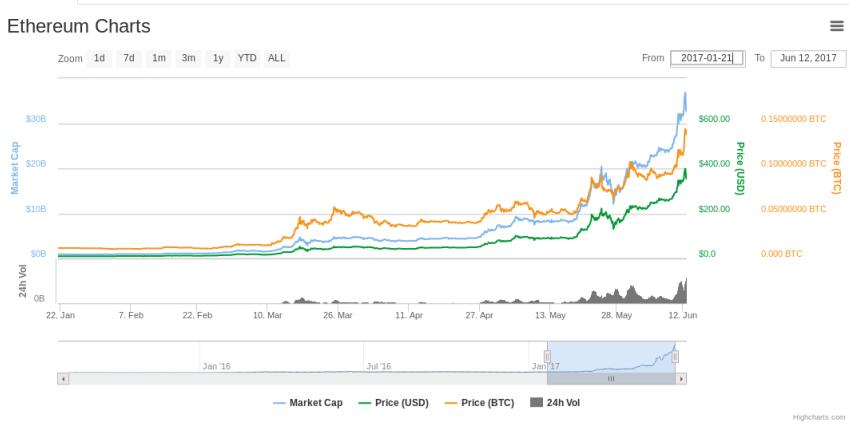 Ethereum has seen significant growth over the last few months, with little sign of stopping

The possibility of Ethereum being worth more than $1,000 is not all that far fetched when one considers how far it has come this year alone. In January it began with a paltry value of $10. Over the course of just six months Ethereum is now worth around $350 Most of that growth has been over the last few months with little sign of stalling.

Of course a lot could go wrong. The Initial Coin Offering bubble could burst spectacularly, the rise of Ethereum could peter out as consumers lose interest or return to Bitcoin. Another currency could break into the market with an innovative idea. In the world of cryptocurrency just about anything is possible, Bitcoin and Ether have proven that time and again and I would never rule out a major shift in the market scuppering the hopes that Ethereum will breach into triple figures.

So, will Ethereum be worth more than $1,000 over the next few months? Looking at the history of the market and the meteoric rise of Ethereum so far I would be willing to say that I believe it more likely that Ethereum will breach that $1000 ceiling than not but in the end, only time will tell.

Andrew DoughtyDecember 5, 2018
Read More
Scroll for more
Tap
The EaseUS Data Recovery Wizard could be one of the best ways to recover your data for free
A new startup Flexpat is hoping to make remote work the way of the future