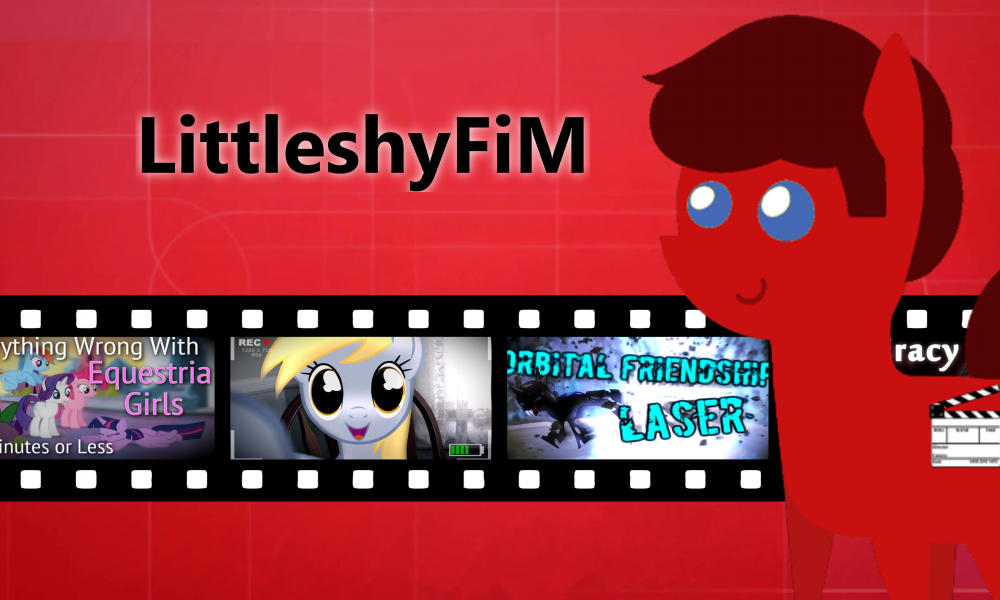 Continuing on the antics from #MLPMonth, I take the time to talk to the derpy fanboy: LittleshyFiM. The guy has over 140,000 subscribers and continues to show bronies inclusive and lighthearted content.

However, not so many people know what’s going on behind the scenes. I decided to use the opportunity to bring some insight about his personal thoughts about My Little Pony to light.

LittleshyFiM: A creator that continues on improving.

When I talked to LittleshyFiM, I expected quite a lot from him and got even more. The man known for his YouTube series Cinemare Sins laid down some incredible insight about his work and viewpoint. He also brought a generally good insight about how he views the brony community in recent years.

I’m a YouTube brony, so although I make a few different types of videos they’re all related to My Little Pony in some way. I’ve made everything from live-action sketches involving animated ponies to “list” videos. My most-viewed series right now is a ponification of Cinema Sins I like to call Cinemare Sins. Basically, it’s a way to nitpick the pony show in a comedic way.

It’s funny to look at the current Littleshy compared to the one in the early days of the fandom. He accomplished so much and his editing skill is nothing short of amazing. When I asked him about it, he responded with a rather interesting answer.

Early on I was able to put Cinemare Sins video together within a week, although as time went on and the quality levels improved I began to devote more time and attention to each video. Currently my schedule is to release a Cinemare Sins video on the 1st of every month, so I devote a couple weeks to writing then a handful of days to recording and editing.

I’m continually finding ways to improve and as time went on the series evolved quite a bit. What started off as a one-off video which I didn’t really expect anyone to actually see has gained quite a bit of attention…including the attention of the original creator of Cinema Sins which is exciting!

Cinemare Sins Vs. LittleshyFiM’s opinion of the series.

Some people have the big misconception of thinking that LittleshyFiM has a bad opinion of My Little Pony. Littleshy decides to clear out some of these misconceptions with the following statement:

I wouldn’t be making pony videos if I didn’t consider myself a super-fan of the show. Taking the time to carefully analyze the show and come up with material actually ends up causing me to find details and positives about the show I hadn’t noticed before.

The videos themselves take on an intentionally nitpicky tone but I’m actually a really big fan of the show. For every nitpick I come up with I have a dozen other things to praise the show for!

Some people wonder what constitutes as a “Sin” in Littleshy’s format. When I asked him about this, he referred to the original Cinema Sins before talking about his approach.

Even the original Cinema Sins series doesn’t have a clear definition of what is counted as a “sin.” Sometimes it’s a legitimate criticism, sometimes an over-the-top nitpick, and sometimes just a simple joke.

My take on the format is pretty similar although I have the benefit of working with a cartoon which means animation errors are immensely more common to be pointed out in my videos.

As for what he thinks of the show in general? Littleshy has a rather positive outlook on the show’s future.

There is no doubt the show has changed over time and that’s to be expected. Some people think it’s a decline, some people think it’s only getting better and better. I’ve always held the belief that even good episodes have faults and episode that are considered bad have a lot of positives too. That trend has been consistent to me throughout the show and I have high hopes for its future.

I asked LittleshyFiM about his thoughts in regards to the My Little Pony fandom. And he started to bring memories from the moment he “Joined the herd” alongside others during the fandom’s first influx.

2011 – 2013 was probably the craziest time to be a brony because the phenomena was exploding across the internet, making it into all sorts of news and media and pony conventions were blowing up. I started watching the show sometime in November of 2011 and created my YouTube channel January 2012.

He then provided some insight about what he thinks in regards to the fan-works we’ve seen. Such as My Little Investigations and some of the upcoming Pony reviews we’ll see in #MLPMonth.

Fanworks are the lifeblood of the brony fandom. Sure, tuning into the show weekly during on-seasons is a major factor but the fan-created stuff is what keeps people interested during the hiatuses. It’s not a stretch to suggest that brony creations have practically over-shadowed the show itself. We’ve got a couple of our own full-length episodes, loads of art, fan fiction, incredibly high-quality animation, etc.

Creating content for the brony fandom is a great way to get recognized, although having an interest in the show in the first place is a rather important prerequisite. I know of many YouTubers, musicians, and artists with humble beginnings who now have a career in doing what they love and many of them are still a part of the fandom.

LittleshyFiM hates fanworks?! No, he doesn’t.

There was one moment where LittleshyFiM reached a sort of controversy in the brony fandom. Once he looked at two fan creations that were popular at their own time, My Little Dashie and Dusk’s Dawn. When I asked him if he really had some grudge against these works or the creators, he told me about the misconception.

My older videos have a problem of being rather tonally inappropriate. I used to focus on being harsh and even rude at times because I thought that’s what Cinema Sins was about, but I was wrong and I like to think I’ve improved since then. Anyway, the reason I bring that up is because I probably did go too far with my My Little Dashie and Dusk’s Dawn videos to the point where it surely affected the entertainment value negatively.

I consider myself a fan of both My Little Dashie and Dusk’s Dawn! I recall being excitedly present during the premiere of both videos and I’m actually friends with the creator of My Little Dashie. Almost had an opportunity to help with the post-production of it in fact!

And while Littleshy definitely likes fanworks, he certainly doesn’t have any sort of favoritism towards any. In fact, he actually can’t think of a way to choose his favorite.

It’s impossible for me to form any sort of favorites list simply because so many different people create so much different stuff and on the whole it’s all pretty awesome. YouTube is kind of my home in the fandom, so although I do my best to follow the must-see content on there I also peruse Reddit and Deviantart to stay on top of the art and other content. It can become overwhelming at times which is why content aggregators like Equestria Daily are so important.

This is going to mark the end of part 1 of the big interview I’ve had with LittleshyFiM. The brony fandom certainly will love to hear that there is a lot more to discuss. However, there needs to be a limit to the amount of information one shows in one go at a time.

Let’s not fret though, as in next edition we’ll be seeing some content in regards to what Littleshy thinks about Hasbro. We also will be taking a look at his stance as a Content Creator among many other members of YouTube.

Andrew DoughtyDecember 5, 2018
Read More
Scroll for more
Tap
BlazBlue Cross Tag Battle Will be Distributed by ASW America
Ubisoft Is Giving Away Free Copies of Watch Dogs for the next Week