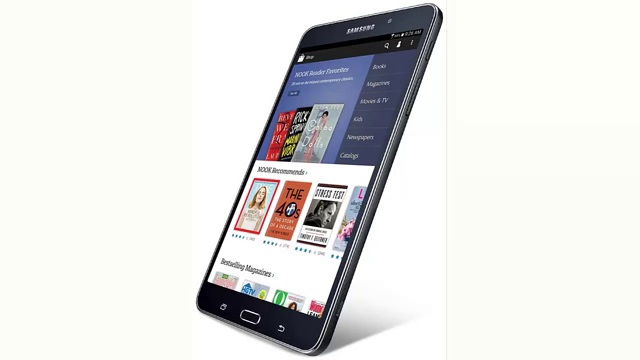 Barnes & Noble announced earlier this year that they was teaming up with Samsung in order to co-develop a new tablet: the Samsung Galaxy Tab 4 Nook. The device will be launched at a New York event scheduled to take place in less than a week from now, but the company decided to give us a sneak peak today. Granted, perhaps that’s a very generous way of putting it as we can only see the tablet’s back cover, which doesn’t exactly offer a lot of details. Most people would have been more interested in seeing the Samsung Galaxy Tab 4 Nook’s display, but apparently Barnes & Nobles figured that only the people featured in the tablet’s latest advertising video should have that honor.

In a move that’s strikingly reminiscent of the Amazon Fire Phone’s commercial, the bookseller giant instructed the people to gaze in awe and excitement at the device. For an extra touch of randomness, Grumpy Cat is seen looking at the Samsung Galaxy Tab 4 Nook at one point during the commercial. And while the meme-generating cat has the same disapproving look we all know and love on its face, a caption saying “I don’t hate it” was added to describe the animal’s real thoughts. So if even Grumpy Cat can be impressed by the Samsung Galaxy Tab 4 Nook how can we mere humans hope to resist its charms? I rest my case.

As for the device itself, the advertisement doesn’t actually reveal anything which is why I went on this tangent. All we know about the tablet is that it’s going to come equipped with a 7-inch display. I assume this is in fact just a slightly modified version of the Samsung Galaxy Tab 4 7.0, but who knows? The full details will be revealed on August 20 and I, for one, can’t wait to see what those people were so impressed about.