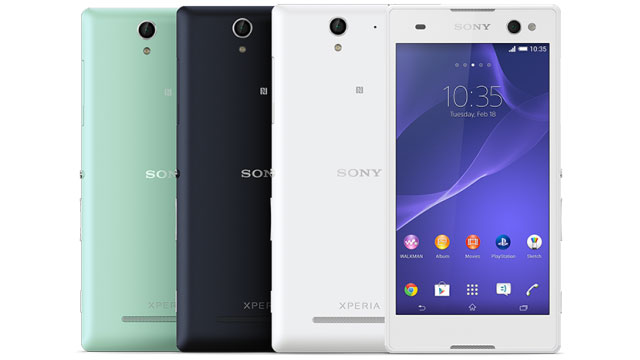 Last month, Sony announced the Xperia C3, also known as the first PROselfie smartphone. As you might have already guessed, this device’s primary purpose is to help you take that perfect selfie and you will do this with its 5MP front-facing wide angle camera coming in at 25mm and featuring an 80-degree field of view as well as LED flash. The smartphone also comes equipped with a variety of social apps and features specifically designed to help you with your selfie taking endeavor. These include: Superio Auto mode, AR effect, Sweep Panormana, Timeshift burst, Vine, and Social live. Needles to say, Sony has embraced this increasingly popular trend and made sure that the Xperia C3 stays true to its nickname.

Camera and features aside, the device can only be considered mid-range due to its overall unimpressive specs. The Xperia C3 does sport a massive 5.5-inch panel, but only features 720 x 1280 pixel resolution, which is pretty low for a display of this size. On the bright side, the PROselfie smartphone packs a pretty massive 2,500 mAh battery and runs on Android 4.4 KitKat straight out of the box. The device is powered by a Qualcomm Snapdragon quad-core CPU running at 1.2 GHz and features an Andreno 305 GPU, 1 GB of RAM, and 8GB of internal storage memory. Additionally, the Sony Xperia C3 also sports a microSD card slot that’s good for up to 32GB of additional storage.

The handset will go on sale early next month and will make its way to the Russian market first with others to follow shortly after. Sony is pricing the Xperia C3 at 13.990 Ruble, which is the equivalent of about 386 US dollars or 290 EURO. We have to note that smartphones are generally more expensive in Russia compared to the rest of the world so it will probably end up costing even less when it makes its way to Western markets.