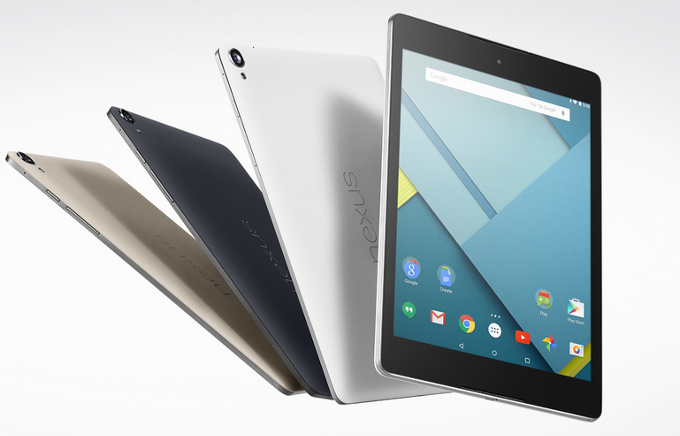 Yesterday’s Google event brought us two new highly anticipated devices – the Motorola Nexus 6 phablet and HTC Nexus 9 tablet – along with the Android 5.0 Lollipop operating system and the Nexus Player set-top console. We have already filled you in on the Nexus 6 earlier, but the time has come to detail the new Tegra K1-powered HTC Nexus 9. There had been many rumors flying around about HTC’s newest venture into the tablet market, and most of them were confirmed during the Google event.

The Nexus 9 tablet comes as a powerhouse, with an Nvidia Tegra K1 CPU running the show. The Nvidia Tegra K1 CPU runs at 2.3 GHz with 2 GB RAM and either 16 GB or 32 GB internal storage. The Nexus 9 features a 9 inch display with a 2048 x 1536 resolution and a 4:3 aspect ratio. One of the best features Google and HTC put into the Nexus 9 are the BoomSound speakers we are familiar with from the HTC One M8 flagship and we are glad to see these high-quality speakers on the Nexus 9. The new tablet is 7.9 mm thick and runs on the new Android 5.0 Lollipop OS. The Nexus 9 has an 8 MP rear camera and a 1.6 MP selfie camera. The Nexus 9 also has a massive 6700 mAH battery, which should last for approximately 9 hours of mixed use, according to Google.

The Nexus 9 has a metal frame and a plastic back and it also comes with an optional keyboard that has dedicated home and emoji keys. The optional Nexus 9 keyboard will magnetically attach to the slate and the back piece will bend so that you can position the tablet according to your preference. You will be able to choose from a Wi-Fi Nexus 9 or an LTE one, in Indigo Black, Lunar White and Sand colors. The Nexus 9 16 GB Wi-Fi version will set you back $400 and the 32 GB Wi-Fi version will cost $480, while the LTE Nexus 9 with 32 GB internal storage will retail for $600. You will be able to buy the Nexus 9 starting November 13 in the Google Play Store, Amazon, Best Buy, T-Mobile, Walmart and Staples.