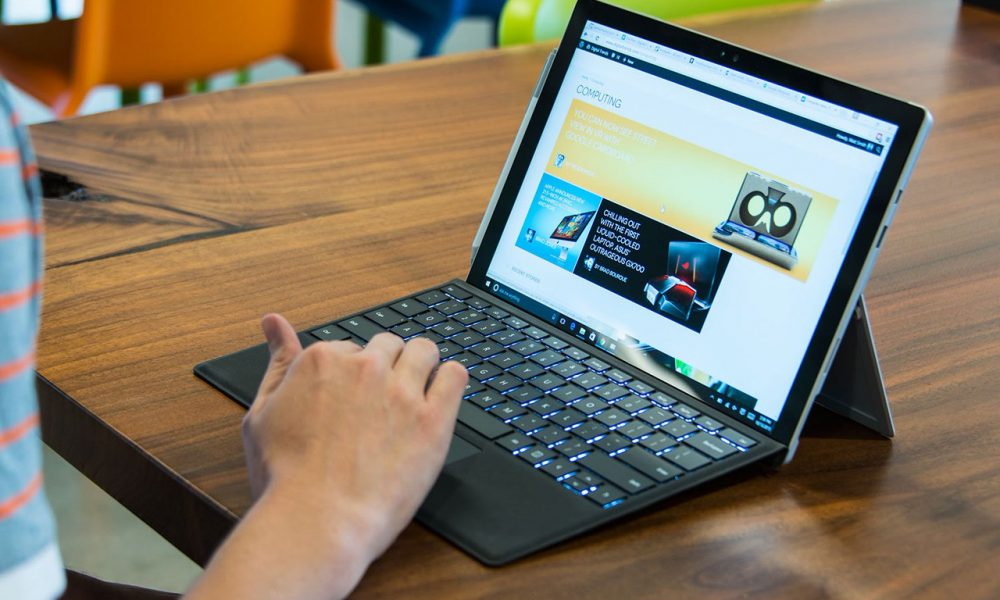 A lot of people instantly think of the iconic iPad when the topic of tablets comes up, but other manufacturers like Samsung and Microsoft have some offerings that can compete with Apple’s flagship tablet. In this article we’ll compare and contrast a couple of those tablets, the Galaxy Tab S3 and the Surface Pro 4 and try to give you a sense of which tablet is the better buy.

It’s important to note that the two tablets we’re comparing have slightly different design philosophies. When looking at the review below, it’s important to keep that in mind and decide what sort of experience you want out of your tablet. Samsung went for a pretty standard high-end tablet with their Galaxy Tab S3 while Microsoft aimed to create the perfect tablet / laptop / desktop hybrid with the Surface Pro 4. Whether Microsoft was successful with that goal we’ll discuss below.

There’s a considerable difference in weight when it comes to the two tablets, with the Samsung Galaxy Tab S3 weighing 434 grams while the Microsoft Surface Pro 4 weighs a lot heavier at 790 grams. This big gap probably won’t sway your decision one way or the other because tablets in general are pretty light, but the Galaxy Tab S3 packs its power into a lighter build. This extra weight is due to a different display size which we talk about more below.

As far as build quality goes, both tablets feel like a high-quality product but are built from different materials. The Galaxy Tab S3 is built with an aluminum frame and a glass back panel while the Surface Pro 4 is built with a magnesium alloy build. This is another category where it’s hard to choose a winner because they both feel like a high-end product. It will really come down to preference and you should really try to get a feel for both yourself before you make a decision based on materials.

The Surface Pro 4 is only available in Silver while the Galaxy Tab 3 is available in Black and Silver, so if you want a Black tablet the Tab S3 is the way to go. I don’t know how much this should really factor into the decision at all, but I guess some people are really focused on aesthetics, a factor that the Galaxy Tab S3 really nails with their thin and compact tablet.

Microsoft’s tablet wins hands down when it comes to display.

Microsoft’s philosophy with the Surface Pro 4 is a tablet that can do double duty as a laptop:

The Surface Pro 4 can also be converted into a desktop in just a few motions with the use of the Surface Dock. The Dock provides support for up to 2 HD Monitors, a full keyboard, a mouse, and any other accessories. The Surface Pro 4 has the chops to truly be a computer replacement in most any situation as well as a capable tablet.

While a stylus doesn’t come standard with every tablet, the Surface Pro 4 and the Galaxy Tab 3 both include a stylus for precision maneuvering. Many people use tablets for artwork, and a good stylus is especially important when it comes to activities like drawing which require a pinpoint accurate pen.

“The revolutionary S Pen has true-to-life pressure and angle sensitivity with the intelligence to translate, magnify, navigate and create with a full palette of brush and pen types. And just like a real pen, it never needs to be charged.”

The Galaxy Tab 3 is clearly created to allow users to express their creativity accurately and easily, winning it major points in the stylus section.

“Surface Pen has 1,024 levels of pressure sensitivity and an eraser on the other end. Just flip it around and erase your Surface Pen strokes like you would with a regular pencil.”

While the sensitivity to touch and the ability to easily erase things is cool, it doesn’t quite live up to the flexibility and features of the stylus offered by Samsung’s tablet.

Quality audio is clearly something Samsung cared deeply about with the Galaxy Tab S3. The device features four speakers which is unusual for tablets, “Sound that moves with you. Quad speakers – Powerful Quad speakers, tuned by AKG, calibrate with your movements as you rotate the Galaxy Tab S3, and intuitively reflect what’s playing on-screen.”

Tablet sound hasn’t typically been a huge focus for manufacturers, so it’s nice to see Samsung trying something new with their Galaxy Tab S3.

The Surface Pro 4 simply states that it features Stereo microphones and two Stereo speakers with Dolby Audio Premium. Considering there’s not even a section on the tablet’s audio and the stats are literally two lines and nestled in the corner of a specifications page must mean that audio quality wasn’t really a focus for Microsoft with this tablet.

The Galaxy Tab S3 is definitely the winner as far as sound quality goes.

As far as cameras go, the Galaxy Tab S3 comes first with a 13 MP (5MP Front) camera ahead of the Surface Pro 4’s 8 MP (5MP Front). Tablets are unwieldy so I don’t know how useful having a great camera on a large tablet is going to be, but for those who take pictures with their tablet the Samsung offering might be the way to go.

The battery on the Tab S3 is said to last for “Up to 12 hours” while the Pro 4 lasts for “Up to 9 Hours”. This isn’t too surprising considering the Surface Pro 4 is very close to a laptop in terms of capability. What the Tab S3 sacrifices in power it may make up with additional battery life. Samsung also claims you can “get back up to a full charge with three hours of Adaptive Fast Charging”, so even if you drain your battery all the way down it won’t take long to get back in the action. 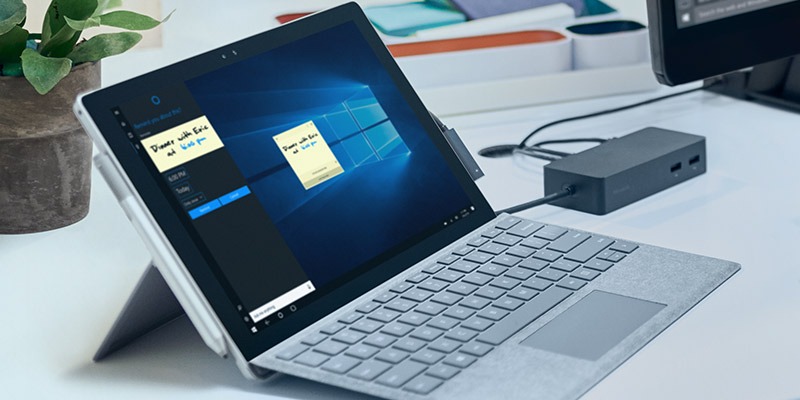 The Galaxy Tab 3 is only available with 32 GB of storage while the Surface Pro 4 is available in 128 GB, 256 GB, 512 GB, and 1 TB options. Each tablet features a microSD slot for additional storage, so the storage on the Galaxy Tab 3 can technically be expanded up to 256 GB of storage with the correct card. 1 TB of storage in a tablet is almost unheard of, however, and these huge storage options really solidify the Surface Pro 4 as a potential laptop replacement.

Operating System and Other Features

The Galaxy Tab S3 runs on an Android operating system, so you’ll have full access to the Google Play store when it comes to installing apps.

A neat feature of the Galaxy Tab S3 is Samsung Flow, which allows you to see notifications, share files, and even take calls from your Samsung Android phone.

Outside of these features, the Galaxy Tab S3 is a pretty standard (yet still high-quality) tablet.

The Surface Pro 4 runs on Windows 10, as expected considering its double duty as a portable PC. Running with Windows 10 allows the tablet/laptop hybrid to run a huge variety of programs as well as office suite for those looking to use their tablet for work.

The Surface Pro 4 also uses state of the art security tech to keep your tablet and information secure. “Log in to your Surface with enterprise-grade facial recognition technology, giving each member of your family their own secured profile.”

We feel that with all the special features and add-ons the Surface Pro 4 features that it wins pretty easily in this section. The ability to use a fully-fledged Windows operating system also gives the tablet a wider variety of accessible programs (though users miss out on the large Google Play Store that the Galaxy Tab S3 can take advantage of)

The Galaxy Tab S3 is available for $597.99 while the Surface Pro 4 retails for $734. The increased price is more than justified, however, given how close Microsoft’s tablet is to a laptop. It pulls ahead of the Galaxy Tab S3 in performance and storage, making it more of a high-end choice.

It’s important to note that the price for the Surface Pro 4 is for the base model and the upgrades we’ve mentioned above can make the tablet very expensive very quickly. A cursory look at the Microsoft website has prices nearing $2000 for the 256 GB model with 16 GB of Ram. Although the Surface Pro 4 has more customization options and is a higher-end tablet overall, that power and flexibility comes at a price.

We’ll have to declare the winner of this battle as the Surface Pro 4. With much better performance, display size, and a variety of storage options it just flat out offers more than the Galaxy Tab S3. For casual use the Galaxy Tab S3 is probably a fine choice, but Microsoft’s tablet is definitely the powerhouse in this showdown.

We’re also a big fan of Microsoft’s philosophy with the Surface Pro 4, as it really accomplishes something that not a lot of other tablet manufacturers are going for. By offering desktop grade computing power in the higher end version of their tablet, they’ve brought us one step closer to a future with completely portable and moddable computers that can mold into a wide variety of roles based on your current needs. 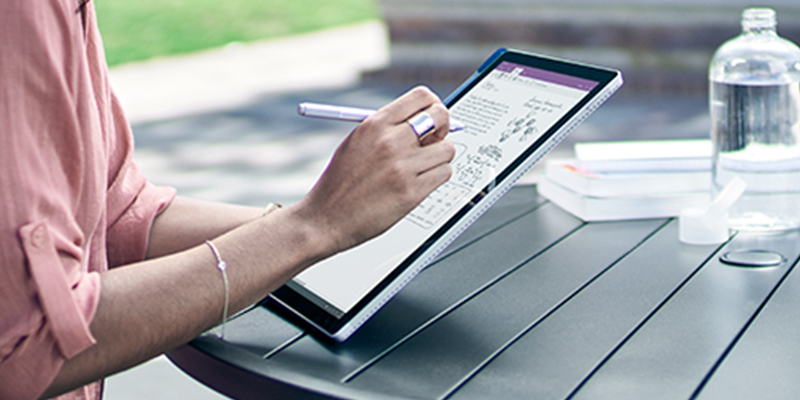