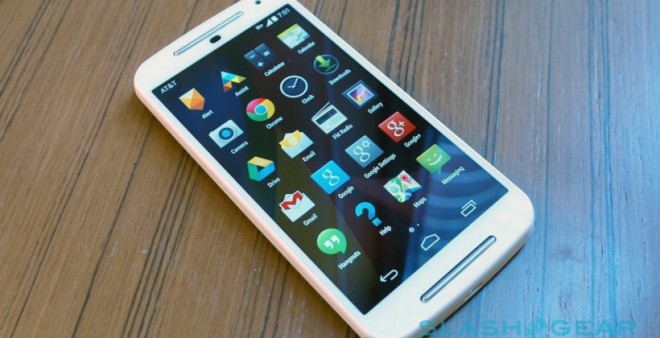 First off, let’s talk design. The Moto G 2015 back panel was recently leaked in a full-on clear photo, which you can see below. It looks like the Moto G 2015 will keep the polycarbonate build materials, but will add a neat panel, similar to the one found on the LG G3 and LG G4 to the back, right under the camera. Although that looks more like a clip than anything else, our sources say it actually hides one of the best and new features of the Moto G 2015: multifunctional keys. That dimple on the back will be programmable by the user to action the camera, start an app or do anything else that you would like as a shortcut. Although others say there’s not effective use for that dimple and the new design on the back panel, our insiders that are close to Motorola say that they’re underestimating what Motorola is doing. 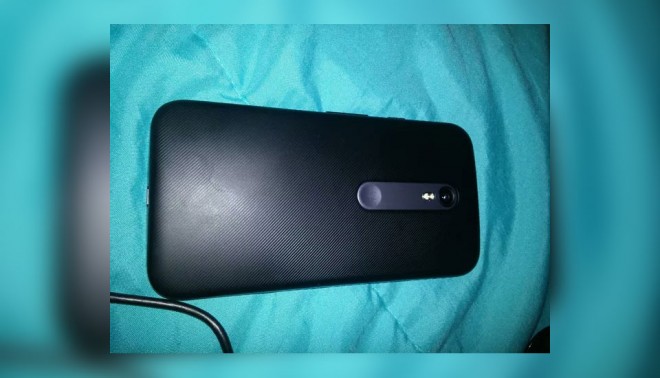 They say that about the specs that have been rumored in the past few weeks as well. Now to get real, the Moto G 2015 design will not be that much different than the Moto G 2014 design. It will sport the same kind of construction and ergonomic feel, but the end product will supposedly come with a nice metal frame. Moreover, there will be dual stereo speakers on the front on the new device, which makes us believe sound quality will be vastly improved compared to the Moto G 2014. Motorola has never been about design, and has always chosen performance over an appealing look, which is a mantra that will become evident when the Moto G 2015 is launched.

Since we’re on the topic of launches, the Moto G 2015 release date is set for this September, probably during the IFA conference of the month. Although the Moto G 2015 release date is not confirmed by the company, it is safe to say that the Lenovo-owned Motorola will keep tradition alive and launch the new phone in the beginning of Fall 2015. September is our best bet for the release date, but it could be earlier or later than that. We will know for sure when Motorola decides to spill the beans on what’s to come in their line-up.

Moving on to specs, rumors are that the Moto G 2015 specs will be largely the ones of the Moto G 2nd generation, with a slightly better Snapdragon 410 CPU. That means that it should come with 1 GB RAM, 8 GB internal storage, 5 inch 720p display, 8 MP camera on the rear, 5 MP camera on the front and a larger 2300 mAh battery. But our sources tell us these specs are way off, and we agree with them, based on Motorola history and demand in the mid-range fan community.

Our insiders tell us that while display size for the Moto G 2015 will stay at 5 inches, the resolution will be upgraded to 1080p, which should make for an inherently better viewing experience. Moreover, they say that the Snapdragon 615 will be the star under the hood, backed by 2 GB RAM and 16 GB internal storage, which would be a more sensible choice, seeing as many Moto G 2014 fans say the specs of the phone are starting to lag and cause the phone to be less than ideal when it comes to performance. A 1 GB RAM smartphone nowadays has a hard time keeping up with updated apps and graphics intensive games, so doubling the amount seems like the right choice.

The camera in the Moto G 2015 will also see an upgrade, according to our inside information, to a 13 MP camera on the rear, complete with a dual flash. The front camera will stay at 5 MP, which should be enough for the average selfie. They also tell us that while the 2300 mAh rumor is close, the Moto G 2015 battery will actually measure 2600 mAh, seeing as that’s what one of the latest prototypes that they’ve checked out is sporting. That would be even better and more in line with the higher resolution display and better camera that are said to be part of the Moto G 2015.

Although there are many leaked Moto G 2015 photos and specs sheets around, none of them can be confirmed as official because Motorola has not yet released information about their next mid-range smartphone. In the hopes of getting a neat phone, many fans and people who we’ve spoken to believe that the specs listed above are more in line with what the company is trying to accomplish. That being said, the Moto G 2015 price will still stay at about $170 per unlocked unit and Android 5.1.1 Lollipop will be running the show, with no bugs, or so they say. Do you think these specs are plausible or do you think the new Moto G 2015 won’t be as interesting as we think it will? More importantly: do you think mid-range smartphones still have a place in the industry or will they be wiped out by the differences between flagship phones and low-end budget smartphones?