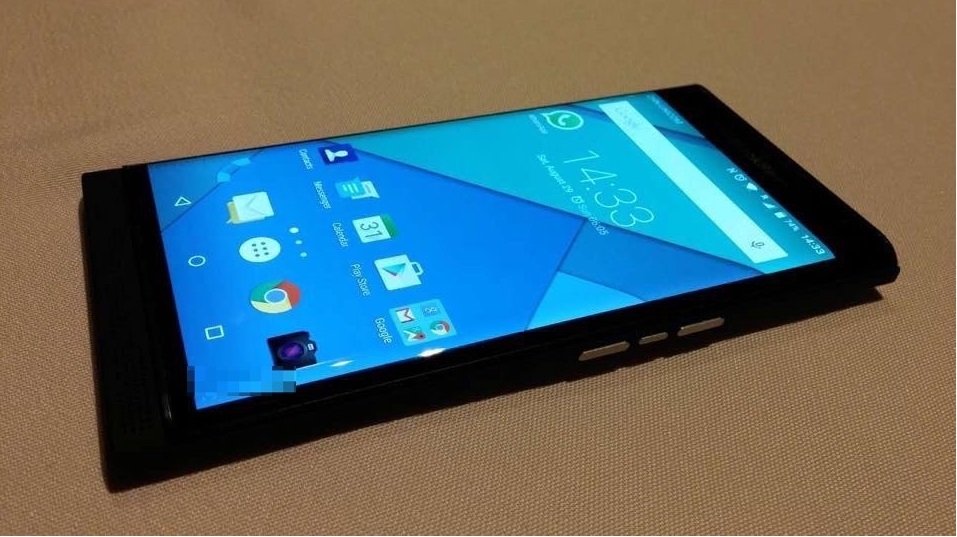 BlackBerry is gearing up for a new launch as various leaks of a new BlackBerry Android phone have surfaced over the past few weeks. Skeptics had said that the Canadian company, with John Chen leading it, will not migrate to Android should start reconsidering their forecasts, as it looks like the new BlackBerry Venice is going to debunk most of what we had expected of the struggling company.

Although the BlackBerry Passport wasn’t as successful as Chen had hoped, it did give the company a bit of spotlight and thus an opening for novelty and innovation. People are more interested in BlackBerry now because of the Passport, because of Chen and his new management techniques, as well as because an Android phone from BlackBerry had been unheard of until a few weeks ago when rumors first surfaced.

In the meantime, Evleaks, Crackberry and many more have picked up on a series of leaked images showing the new BlackBerry Android phone that is code-named Venice. People seem to be very interested in the new release, not just because it involves Android 5.1 Lollipop, but because of a new design element that the company will be introducing with this phone: the slider keyboard.

BlackBerry Venice, from what we can tell, is going to attempt to revolutionize the way in which we use our smartphones and if the company engineers everything right and matches software just as well, we might have a new winner on our hands. Most fans of the company might not like the operating system switch, but our sources tell us that Android will only be on the surface. Deep down, the BlackBerry Venice will still be BBM, encrypted communications, total security and a proprietary messaging and file sharing system.

Android 5.1 Lollipop for BlackBerry means more of a visual overhaul than one impacting performance, as most of you probably know that the company’s previous devices had had no performance issues. Or at least, not very often. Porting Android to a BlackBerry phone is a bit scary because it might change the way in which long-time BlackBerry fans perceive the company and it might change the way in which they interact with their phones. Hopefully, the change will be for the better.

Keep in mind that this BlackBerry Android phone is not yet official, or confirmed by the company, so all the information within this article (and elsewhere, for that matter) should be taken with a grain of salt. Nonetheless, the leaked images seem authentic enough to warrant a confirmation on the community’s part that BlackBerry is indeed working on an Android-based smartphone and one with a slide-out keyboard on top of that.

The most interesting part about the Venice device is its slider keyboard. The name of the handset is not confirmed yet, but “Venice” has appeared in leaked documentation repeatedly, pointing towards a consistent presence of the new device on the company’s agenda. Whether the slide-out keyboard will change the way in which we use smartphones remains to be seen, but the concept is certainly promising.

Those of you who are used to QWERTY keyboards, like BlackBerry fans and those familiar with Seacrest’s Typo cases will most likely love the idea, while those accustomed to on-screen typing (as is the case with Android and iOS most of the time) might be a bit taken aback at first. Until we can actually test the slide-out keyboard on the BlackBerry Android phone, we remain just as skeptical as anyone else. Our hopes are that the keyboard will not add to much weight or bulk to the phone, and the leaked images look pretty good from that point of view at the moment.

At the same time, if the new BlackBerry Android phone uses a slide-out keyboard, it’s going to have some software optimization and hardware optimization in place for the seamless use of the keyboard itself. The fact that the keyboard is built-in will most likely make it easy to use and more responsive than any touch-based keyboard. Considering that BlackBerry’s keyboard tech is off the chart and people all over the world enjoy what they make, I would say the slider will be a success.

Nonetheless, skeptics say BlackBerry doesn’t have a shot at getting back in the game with the big players. Many hope (probably Chen, too) that the switch to Android and the addition of a slide-out, hiding keyboard will convince more people to come to the BlackBerry side. Android is a very important factor, maybe even more important than the QWERTY element, because people are used to it. With this move, BlackBerry can attract long-time Android fans who didn’t like BlackBerry’s own OS, and that’s quite the market share right there.

Whether the BlackBerry Android phone is a success among Android fans or not depends on you guys. Do you think the company can pull off Android or do you think that they should stick with what they know? In my opinion, there’s little the company can do right now to get back in the game, and partnering with Google is one of the few things that can actually present serious results.

To be as comprehensive as possible, we’ve also gathered a multitude of rumors about the Venice, so that we can get an idea what lies beyond the surface. The BlackBerry Android phone is supposed to be a beast and compete against everything that’s on the market right now, and if rumors are true, it might have a great shot at taking on the major leagues.

According to various insiders, rumors, leaks and community members, the BlackBerry Venice will feature a 5.4-inch IPS display with an FHD resolution of 1080*1920, or something close to that. Under the hood, it will sport a Snapdragon 808 (just like the one in the LG G4), 3 GB RAM and up to 128 GB expandable internal storage. USB Type-C might be features in the end, although in the leaked images of a prototype, we can’t spot it. There will be a massive 18 MP camera on the rear with dual-tone flash and optical image stabilization and an 8 MP camera on the front, which sounds absolutely amazing. If the company gets the camera setup right, Lumias, Samsungs, iPhones and any others that you can think should start trembling.

A fingerprint sensor might be possible, although the design of the phone might not allow for that, unless embedded in the sliding keyboard. Since there’s no trace of such a feature in the prototype images, it’s safe to say that the BlackBerry Venice might lack the feature. But it might use eye-tracking technology for biometric security instead, which is an interesting idea to consider. A microSD card slot and a big battery will only add to the appeal of the device. A removable battery is out of the question, however, because the design can’t allow for that, from what we can tell.

No matter what the BlackBerry Android phone, code-named Venice, will bring to the market, it’s definitely going to be a step ahead for the company. Availability and pricing are uncertain, seeing as John Chen and co. haven’t completely confirmed the existence of the phone yet. A prototype was flashed at the MWC this year, but that’s about when it comes to official information. When we have more, we’ll let you know. Are you excited?