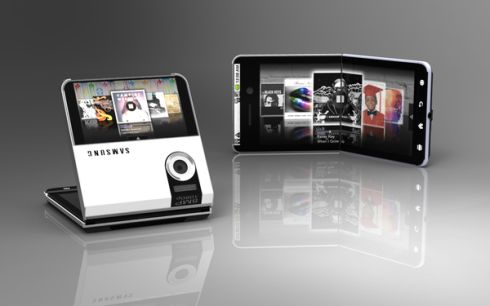 Samsung is on a roll this year, and it plans to keep on rolling with yet another innovative, unique phone. The Samsung Valley, aka Project V, is the newest idea from the South Korean smartphone giant and it’s actually a completely foldable phone. Samsung has already talked about its ambitions to release a foldable phone last year, when they were confident that they would be putting one of those on the market in 2016. It looks like they’re keeping that promise as insiders close to the matter have come forward saying that the first foldable phone would be released in January 2016 by Samsung.

Take this with a grain of salt, as Samsung hasn’t yet confirmed that a foldable phone would be ready as early as January. Nonetheless, the rumor mill has started spinning and more and more fans of the company are getting excited about the prospect of a truly versatile foldable phone. With a foldable phone, users would have the comfort of folding their phones into a smaller footprint and storing it even in the smallest of pockets. A foldable phone carries benefits for endurance as well, seeing as the display of the device would not stay uncovered when folded.

Although information about the foldable Samsung smartphone is scarce, sources tell us that the specs and features of the phone will be in-between the mid-range and high-end categories. While some say Samsung will be engineering its own new Exynos CPU for the phone, others believe Qualcomm’s new Snapdragon 820 CPU with Quick Charge 3.0 and LTE-U will be the main character of the phone, backed by 3 GB RAM and about 64 GB internal storage.

The foldable phone concept from Samsung emerged quite a few years ago and apparently the company has spent the past two or three years working on a viable prototype to release for consumers. If the schedule moves ahead according to plan, the Samsung Valley foldable phone release date should land sometime in the middle of January 2016. To start the year off well, Samsung is apparently orienting this smartphone towards the manufacturing and hazardous materials industry as a durable phone, although we’re skeptical about that.

More likely is that the foldable phone would be in the same genre as Samsung’s edge smartphones – a gimmicky, yet very cool device. We’re curious to find out more especially because of the battery. Apparently, Samsung is going to use a new technology and an entirely new battery which it designed in the foldable Valley phone. The battery would also be flexible, although we don’t know if that’s possible right now. Work on flexible batteries has been going on for years, but companies (Samsung included) can’t say that they’ve managed to create a viable model for such a battery yet. We’ll find out.

Most likely, the foldable phone will have the battery on one side and the other components on the other side, as the phone is expected to fold only in two. Four-way folding is not yet possible, for sure, but it would be awesome. In any case, it looks like the company is right on track with its plans. That means we should look forward to January, as the month when we get to check out the first ever foldable phone, from Samsung no less. Curious, isn’t it?