This year I decided to be more in tune with technology and I vowed to try and incorporate gadgets more into my daily life and routine. One of the essentials for starting an interconnected section of your life, for various reasons, is a Bluetooth speaker and I got the chance to test and review a really neat one during my journey. This review will mostly be about the Ado Mate 3 portable Bluetooth speaker from GearBest, but it will also reveal a bit about how technology can be used to make life easier, with a minimal investment.

One of the best parts about the Ado Mate 3 Bluetooth speaker is its price. If you’re looking for a cheap, portable Bluetooth speaker that won’t leave your pockets empty for the rest of the week, you’ve stumbled to the right place. The Ado Mate 3 price is just $15 , which is outrageously low. Seeing such a price might make people turn around and run, but when you’re on a budget, you will try everything.

I did, and I have no reason to complain. The Ado Mate 3 Bluetooth speaker is as good as any other speaker (wired or wireless) I’ve used. If you’re in the market for a Bluetooth speaker that you want to use for entertainment at home or at work, the Ado Mate 3 is a good option. I’ve found myself using it while I shower, at work and while cooking and cleaning around the house. The convenience of a Bluetooth speaker doesn’t necessarily have to be explained, but I find it better to describe the use cases for the device so that you guys can get an idea of how I used it and how you could use it.

The main thing I used the Ado Mate 3 Bluetooth speaker for was music. Using the device is stupidly easy: you just turn it on and turn the Bluetooth on on your chosen device (Android, PC, Mac, iOS) and you’re ready. Although it might take the Ado Mate 3 a couple of minutes to connect to the target device for the first time, it won’t have any connectivity issues in the future thanks to Bluetooth 2.1. There is also the option of using the speaker’s built-in NFC antennae to connect to your smartphone, which is yet another convenience. 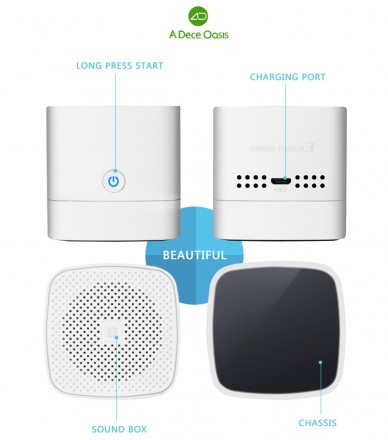 Once the devices are connected, every sound that you play on your phone will be output on the Bluetooth speaker and that’s all there is to it. It’s an inherently simple device made for those who don’t really like to fiddle with settings, connections, passkeys, codes, names, playlists, streaming lists, Miracast and such complicated issues. Although there are obvious benefits to having more customizable devices, the Ado Mate 3 is made for simplicity rather than user customization. All the sound settings that you want to apply you do through your target device, be that your phone or laptop.

The Ado Mate 3 does the basics: it plays music. It doesn’t have a volume button, and all that it has is a power button and a truly great design, but that’s all it needs. You can control volume from the connected device, and while that may be a problem for some, I didn’t find it bothersome at all. Once I turned the Bluetooth speaker on, I just positioned it right above the counter and left it there. All the music playing and volume adjusting was done on my phone, from any room of the house.

The Ado Mate 3 Bluetooth speaker has a seamless connection which hasn’t faltered on me once. There’s a 15 m range that the device supports and it stays true to that. While I left the speaker on the kitchen counter, and went out to the balcony, the music was still playing with no interference. I also tried the Bluetooth speaker outdoors in an area where there could have been a lot of interference: a fast food joint. While the employees enjoyed the music I was playing, I went next door to the coffee shop for a cup’p’gold and the speaker had no issues keeping the connection steady. I might have even passed the 15 m range by a foot or two, but the speaker still managed to play music without a hitch. 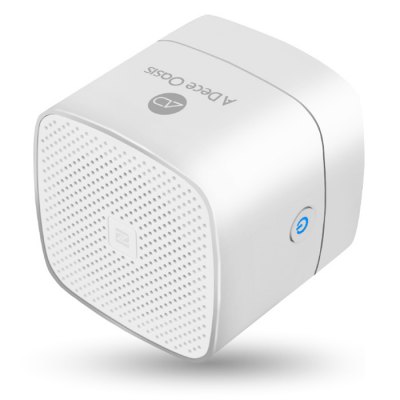 The Ado Mate 3 comes with stereo sound and great bass, which I was surprised by. When I first saw the Bluetooth speaker, I thought that it would be about as loud as my phone’s speaker and about as high-res as the speaker on my watch. Luckily, the speaker impressed more than I had anticipated it would. Besides being tremendously loud (loud enough to fill a pretty big fast food joint and loud enough to accompany a bike rally and entertain most of the crowd), the speaker actually has good bass, which is usually an issue with such small, cheap devices.

The design of the Bluetooth speaker is my favorite, though it doesn’t have anything special. The body of the device is made from metal and polycarbonate and while most of the device is plastic, the company added a matte, grainy finish to the surface of the speaker all around the grill, which looks and feels great. The device fits in your pocket, although it is a bit heavy. I enjoyed the sturdy, heavy feeling of the Bluetooth speaker however, as I saw it fall and roll on the ground without any negative consequences. The minimalist, yet sturdy design is among my favorite features of the gadget.

Inside the Bluetooth speaker we can find a pretty big 1800 mAh battery, which according to the company should provide for about 15 hours of usage. That’s a pretty high estimate and I was rather skeptical about it. There are few Bluetooth speakers out there which can boast with that battery life, especially in such a small form factor, so skepticism was not uncalled for. After a month of testing on NFC and Bluetooth, I came up with an average battery life for the device.

The Ado Mate 3 Bluetooth speaker will last for about 6 or 7 hours with continuous music playing from Youtube, Soundcloud, media library either on a Bluetooth connection or on NFC. I found that battery life was the same with both connectivity options, although it is half of what the company advertises. Honestly, I did not feel disappointed by the performance and battery life of the device, which is surprising. Considering the fact that the company promises 15 hours of music play and the device managed only half of that, most people would feel disappointed. 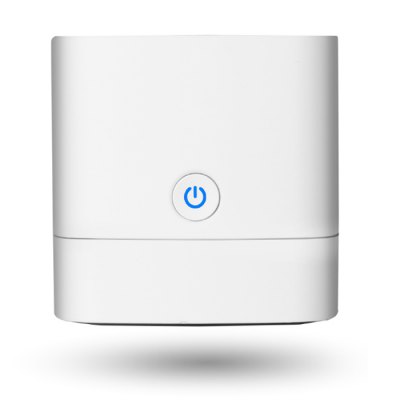 I’m content with the battery life on the Bluetooth speaker because it only costs $15, it has no connectivity issues, it’s loud, it has a decent level of bass and it charges in less than 2 hours to full. I think the trade-off is fair here and for what this speaker is designed for, it doesn’t even need a stellar autonomy. Thanks to the seamless user experience, I was actually impressed that the speaker even lasted that long.

Overall, the Ado Mate 3 Bluetooth speaker is not bad at all. with the $15 price in mind, the device does what it is supposed to do, and in style no less. Although advertising 15 to 20 hours of continuous playtime is a bit misleading, 7 hours from a device smaller than my phone is still rather impressive.  I would definitely recommend the Ado Mate 3 to anyone looking for a cheap Bluetooth speaker that they can slip in their pocket or purse and just turn on and off and be done with it. No hassle, no stress.