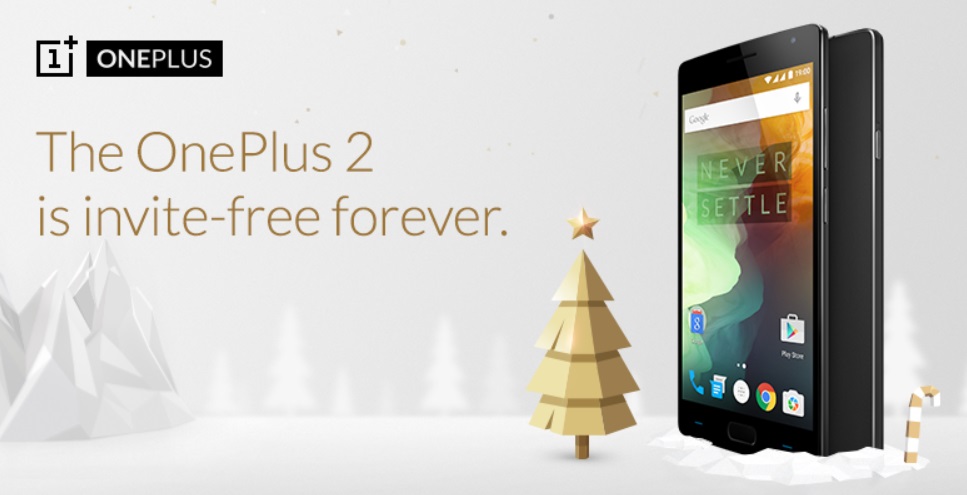 OnePlus have announced that their latest flagship, the OnePlus 2 would be  available sans invite starting December 5, in an attempt to increase sales and please international fans having trouble getting an invite. The move also represents growth for the company, as moving away from the invite system means they can now fulfill their orders without too much delay and without manufacturing problems. To celebrate the holidays and their upcoming second birthday, the Chinese company is also going to be making the OnePlus X invite-free, albeit only for two days, between December 5 and 7.

Android fans interested in the OnePlus 2 will have unlimited access to it starting Dec. 5, which is expected to boost sales and raise awareness about the brand, in preparation for next year’s big launches. The handset is currently enjoying less popularity than the mid-range device the company launched this Fall, due to fans feeling like it isn’t much of an upgrade and because of the problems they’re having with USB Type C cables supplied by the company. Nonetheless, opening up sales internationally for the OnePlus 2 is a good idea to bring back some positive vibes to the company’s unconventional online marketing strategy.

Besides the invite-free announcement, the company also revealed that between Dec. 5 and 7, StyleSwap covers for the OnePlus 2 will be 50%, while the rest of the accessories the company sells in their shop will be discounted by as much as 90%. Ideal for those thinking of grabbing some accessories to fill Xmas stockings with this month. Further incentive to participate in the holiday sales of OnePlus for newbies might be that new orders have a shot at getting custom mouse pads, which is neat.

While discounts for the OnePlus 2 and OnePlus X have not been announced, we wouldn’t be surprised at an anniversary price accompanying the new invite-free order environment. We’ll have to wait until midnight on Saturday to find out, though.