Huawei TalkBand B2, fitness tracker and much more

Huawei TalkBand B2, fitness tracker and much more

Huawei has launched the TalkBand B2 this year to remarkably positive reviews, as the fitness tracking wearable gadget quickly became one of the most popular wearable devices on the market. Huawei still has a long way to go to become a leading figure on the American market, but it’s on the right path, starting with the Huawei TalkBand B2. We’ve browsed around the internet and found two great offers that bring down the Huawei TalkBand B2 price a little on GearBest. You do need to use coupon codes, though. You can head on over to GearBest and use the coupon code GBB2L to get a gold Huawei TalkBand B2 for only $156 or use the code GBB2 to get a black and silver variant for only $134 retail.

So what’s all the hype around the Huawei TalkBand B2? First off, if you compare it to the Apple Watch, for example, there’s one big thing that jumps out at you: its price. While the Apple Watch price for the base model is $350, the Huawei TalkBand B2 price is between $180 and $250, depending on the variant that you choose. That’s a pretty cheap wearable device, although truth is, if you’re a beginner in the wearable industry, you might as well dip your toes in the water for less and get one of those Chinese smart watches for less than $50, just to get the hang of it. But the Huawei TalkBand B2 has proven itself a great investment, because it doesn’t just fulfill the purpose of the average fitness tracker. It does much more than that, which is why it is such a successful product.

With the Huawei TalkBand B2, the Chinese company wanted to make itself known as the OEM that sends multifunctional gadgets out its doors and makes them appealing even to those that don’t feel the need to buy a smart watch. It’s actually a very smart strategy in my opinion, and so far, it seems to be working. Especially if you make use of the codes above and get it for a discounted price! The Huawei TalkBand B2 is a fitness tracker, a smart watch and a Bluetooth headset, all in one simple, stylish, premium package. Now that’s something you won’t get with the Apple Watch. Well, you will get the premium feeling that’s for sure. 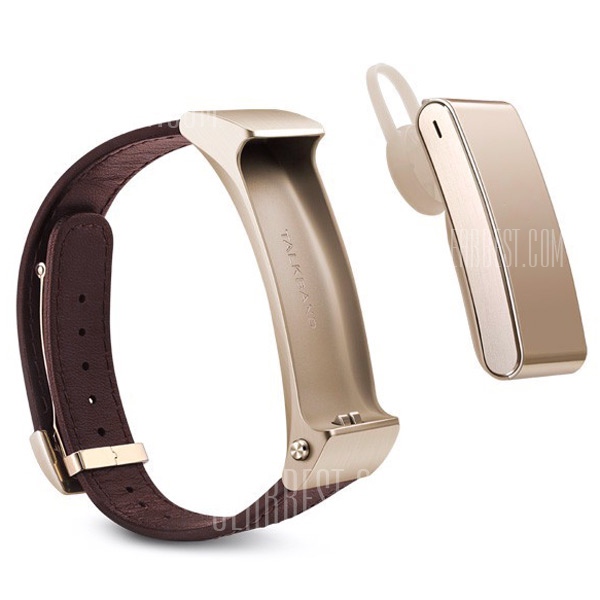 If you choose the gold Huawei TalkBand B2, you’ll get a golden aluminum case and a leather band, which look as premium as it gets when it comes to smart bracelets. The silver and black variant is just as attractive with its aluminum case and TPU band, but it’s definitely not as premium as the leather band on the golden variant. The design is slim and multifunctional, with the main unit being able to pop out of the case itself and double as a neat Bluetooth headset that you can use to take conversations while on the run, without having to get your phone out of your pocket.

One of the perks of the Huawei TalkBand B2 is its IP57 waterproof certification, as well as its compatibility with both iOS and Android devices. The device comes with Bluetooth 3.0 and it can be connected to two devices at the same time, too. Its battery measures 95 mAh, but according to Huawei, it can last for up to 14 days in standby with Bluetooth off, and 6 days with Bluetooth on. That time will vary depending on how much you use its headset functionality, as you can imagine. Even so, the device should last for a couple of days at least, which is a great improvement compared to the average battery life that the Apple Watch, Moto 360 and Asus ZenWatch come with.

Huawei TalkBand B2 features include a touchscreen that measures 0.73 inches and has a resolution of 128*88 as well as a button on the side for various control features. It needs about an hour and a half to charge through microUSB, which means that it doesn’t have wireless charging. But it has a 6 axis sensor that can track steps, sleep, stair climbing sessions (that’s a thing), running and of course, biking. The Huawei TalkBand B2 also functions as a notifications center, which means you can get all your social media notifications in one place.

Although compared to other smart watches, the only features that stand out about the Huawei TalkBand B2 are its water and dust-resistance and its dual Bluetooth headset functionality, it’s still one of the most stylish smartbands that we’ve come across recently. It is very similar to Sony’s Talkband, but it is a bit bulkier because of the pop-out headset thing. It’s definitely one of the best wearables that we’ve seen this year and it can definitely compete against the Apple Watch, especially at its current discounted price range. Any takers?