Pebble Time Round vs Apple Watch – design vs quality

Pebble Time Round vs Apple Watch – design vs quality

The Pebble Time Round went on sale yesterday and the reviews are getting in. Pebble went all out on making their circular smart watch a utilitarian gadget that isn’t just there on your wrist for fashion, and made strides towards that goal, although they haven’t exactly reached it yet. Nonetheless, the company made a lot of progress with the wearable and turned it into a device that can be appealing to more people thanks to its design.

Although the build quality of the Pebble Time Round could use some improvement, the first circular Pebble still feels like a well-constructed wearable that can make a place for itself in the tech community. With a couple of new features and a streamlined user interface, the Pebble Time Round has a lot of potential. But how does it stack up to the Apple Watch?

The Pebble Time Round is designed with a different design aesthetic in mind than previous Pebble wearables, taking ease of use and comfort to another level. With a lightweight, thin and small plastic body, the Pebble Time Round redefines the company’s audience and it’s future as well. Although the chassis could have been a bit more solid and sturdy, the trade-off is worth it thanks to its maneuverability. Nonetheless the lack of waterproof certification is a noticeable drawback of the new model. The Pebble Time can be worn even in the shower, while the Pebble Time Round is only protected from small amounts of water like rain or when washing your hands.

The Apple Watch comes with a similar water resistance, so neither of these smart watches will do if you want to swim or shower with them on without having to worry about breaking them. The Apple Watch is a good deal bigger than the Pebble Time Round, even though its display is ultimately smaller. It’s a bit heavier and more cumbersome to fiddle with, compared to Pebble’s device. The Apple Watch is thicker and has a larger footprint, which makes the Pebble Time Round a much more comfortable wearable device. That being said, the size of the wearable did bring in some trade-offs.

They had to pull off that thin size by sacrificing the size of the battery within the watch. Although the Pebble Time Round battery life is still at around a day and a half or two, it’s not as good as the autonomy of its predecessors. However, it is on par with the Apple Watch battery life. The Apple Watch has the added Force Touch and wireless charging features which give it a bit of an advantage in the face of the circular wearable. Its design is also superior when it comes to build materials and quality and its price is closer to its value (for the Sport model, at least) than the Pebble Time Round price is.

The Pebble Time Round has the advantage of its streamlined, easy to use and fluid operating system, which groups everything in a timeline through which you can scroll using the buttons on the device. You can’t do much else with it, but this simplicity is what most people will actually come to appreciate. With the Apple Watch, you can do a lot of things, like write texts, talk to people through heartbeats, measure your heartbeat, monitor your health, receive notifications, access apps and much more. With the Pebble Time Round, you can do some of these things, provided apps are going to be released – which is taking longer than usual.

The user interface of the Pebble Time Round is much smoother than WatchOS, in the sense that you can easily see everything you need to, without distractions and awkward searching on your wrist. The small display of the device isn’t the brightest, so it’s not going to be easy to see the info that it displays in bright light, but at least you’ll only have to spend a couple of seconds to get the information you’re looking for. When you scroll upwards in the timleine, Pebble Time Round will show you past events, notifications and tracking information while when you scroll downwards, it will show you future calendar appointments and events.

Compared to the Apple Watch’s WatchOS, the user interface of the Pebble Time Round is more familiar and easier to use. First-time wearable users will like this most, because it’s very easy to get the information you want from the watch in a glance, without having to interfere that much. Although the Pebble Time Round has a multitude of available apps, there are still missing features and apps that are necessary in order to make this smartwatch viable for everyone. 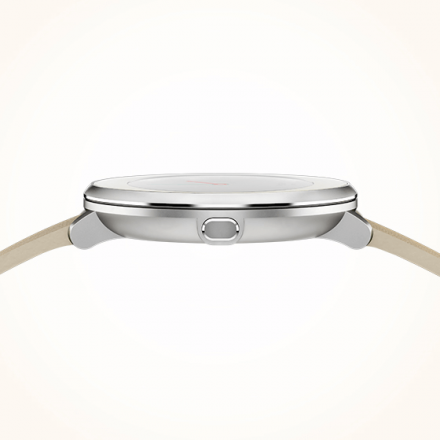 The Pebble Time Round doesn’t work as well with the iPhone or iOS as the Apple Watch does, and it’s actually quite difficult to use with Apple’s OS. That’s because you can’t filter notifications on iOS and they will ultimately clutter the timeline on the watch to a point where it can become very difficult to make sense of all the notifications. On Android, however, the experience is much smoother and customizable. The Pebble Time Round has the benefit of working with both platform, which we can’t say about the Apple Watch, which is restricted to iOS compatibility. Although you can make it work with Android, it wasn’t built for Android and they don’t work that well together.

The Pebble Time Round is so far on par with its predecessors when it comes to performance. The device will occasionally stutter because of the apps that aren’t optimized, but otherwise, the user interface and software work rather well with most smartphones. Performance could be improved in the future, but it’s still at a decent level that won’t annoy users. With the always-on screen, the Pebble Time Round saves wearable users a bit of time,while the Apple Watch leaves them fiddling a lot more to get to the information they are looking for.

Pebble could have done better on the Pebble Time Round if they had thought a bit more about durability and premium design. However, the purpose of this wearable is not to look and feel premium, rather its main aim is to show people that wearables can be easy to use. Although Android Wear and WatchOS are pretty simple interfaces, they still have a learning curve some might not appreciate. The Pebble Time Round doesn’t need much fiddling and customizing, and it will show you only the basic things you actually want to know when looking at your wrist. Getting through all the information delivered by the wearable is much easier with its timeline view than it is on Android Wear and WatchOS, which is why the Pebble Time Round is still an admirable release, despite its drawbacks.

Compared to the Apple Watch, Pebble Time Round might not be the best choice for iOS users, but it might be a better choice for Android users. With a trendy design that still manages to be unique in its own way, the wearable is anticipated to impress many people out there. Made with an easy to use experience in mind, it is the better option if you’re going for your first wearable. However, if you want something professional for sports or health tracking, with advanced features and long battery life, the Pebble Time Round is not for you. The Apple Watch might be, though, as long as you’re not thinking of swimming. The Pebble Time Round will be available for purchase starting November 8 in stores, when shipping of pre-orders is also supposed to begin. You can check out the dedicated page to place your order if you’re more of an online shopping kind of person.

Best ways to organize your digital photos: iCloud, Dropbox, Google Photos
Moto 360 2nd gen vs the predecessor: which to choose