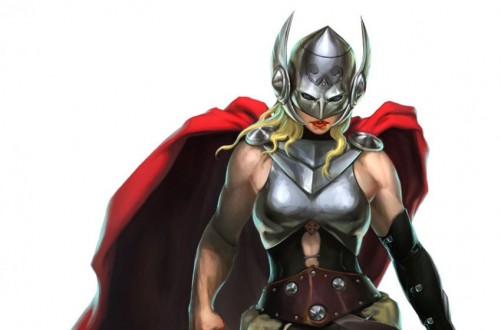 As a huge Marvel fan myself I was very excited when I first learned about the female Thor. She first appeared as a mysterious women in “Thor – Tears of the Gods vol.2” in April 2000. When Thor and the rest of the Asgardiands left the moon, she was the only one who could pick up the Mjolnir, Thor’s mighty hammer. Her real name remains a secret even until today but she is referred as the Goddess of Thunder and The Mighty Thor.

According to Diamond Comic Distributors the first five issues featuring the Female Thor have outsold the previous Thor series from 2012. In October 2014 “Thor #1” was released and sold over 150.000 copies, which is considered to be a 30% more then what “Thor: God of Thunder” had sold. The following four issues haven’t reached the firsts comic numbers but still the sales for the Female Thor series were higher than the original Thor.

By studying these increased North-American sales of the first 5 copies featuring the Female Thor we can see that besides updating their comic books, Marvel has increased its business. It was not released if the comic attracted more female fans but we might know more about who is buying these comics if Marvel releases some data of its own. Despite protests of some angered Thor fans the sales numbers assure that our new Female Thor will appear in more comic issues and attract more fans.