Marvel never ceases to amaze us when bringing to life comic book superheroes in movies. After movies like The Avengers or TV shows like Marvel’s Agents of S.H.I.E.L.D and even Guardians of the Galaxy, they are making us expect this new awesome superhero called Ant-Man(is it too late to change the name?). A criminal called Scott Lang got his hands on a substance that allows him to shrink but while shrinking he gains strength. With the help of his mentor Dr. Hank Pym former Ant-Man, he has to fight against Darren Cross, a former protege of Pym’s who took over his company and militarized the Ant-Man technology. 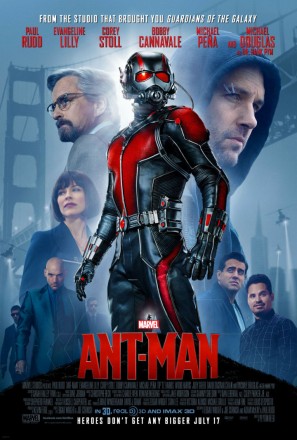 What most of you don’t know is that Ant-Man is one of the original Avengers which makes him sound even cooler, except the name. Starring Paul Rudd as Scott Lang(Ant-Man), Evangeline Lilly as Hank Pym’s daughter, Corey Stoll as the villan and Michael Douglas as Hank Pym. After the success that the other Marvel movies had, we can expect another high income film, introducing new characters to the Marvel movies universe.

The movie is going to be released on 14 July 2015 at the Fantasia International Film Festival and to keep us waiting Marvel released a new poster of the movie. Thanks to the new poster we can see how Ant-Man will look and also some of the main characters. “From the studio that brought you Guardians of the Galaxy” be prepared to have a good laugh while watching Ant-Man. If you’re interested about other details and get a look at some of the cast check out the trailer below.