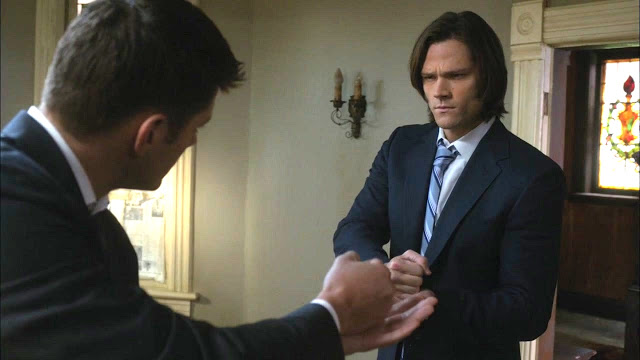 As the month of May nears the halfway point, many networks have finalized their lineups for next fall. Due to a strong showing from many genre offerings, some of our favorite sci-fi, horror, and fantasy shows survived the chopping block, while others will only remain as bittersweet memories (and floaters on Netflix, Hulu, or Amazon). Some shows are still awaiting notification, but most have received their hall passes or their walking papers. Who made the grade?

Comic book favorite “Gotham” pulled together a solid fan base, despite a few growing pains. As a result, young Bruce Wayne and his nemeses-in-training will live to fight for the city another day. Quirky post-apocalyptic riffer “Last Man On Earth,” late-bloomer “Sleepy Hollow,” and now permanent fixture “The Simpsons” will also return. Unfortunately, unless he knows what Fox’s executives did last summer, Kevin Williamson’s serial killer cult offering, “The Following,” will get the axe. Also on the out is “Utopia,” which disappears under the weight of its dystopian ratings.

Already a bastion for televised comics, horror, fantasy, and sci-fi, it seems like the CW programs are almost as much genre TV as SyFy. And it shows in terms of ratings, as faithful fans have kept their cadre of original programming alive. Newbies like sci-fi potboiler “The 100,” DC comics speed demon “The Flash,” medieval drama “Reign” and campy undead whodunit “iZombie” have been renewed for another season, as well as perennial favorites like the wisecracking Winchesters of “Supernatural,” and regulars like goth-vamp melodrama “The Vampire Diaries,” DC bow-slinger “Arrow” and “Beauty and the Beast.” In media res apocalyptic thriller, “The Messengers,” on the other hand, wound up in the TV wastelands.

On the big eye, nerd-humor stalwart “The Big Bang Theory” sets up for another year of chuckles. The computer-savvy champions of “Scorpion” will also get another round, as CBS’s limited genre lineup posts no losses. The peacock has also had some degree of success with TV subculture this year. Fairy tale mishmashers “Grimm” will also spend another season unravelling paranormal calamities. A sad addition to the chopping block is Alan Moore and Stephen Bissette’s sardonic hellion-fighter “Constantine.” Joining him will be spies not liked by us, espionage thrillers “State of Affairs” and “Allegiance,” which have been neutralized.

Disney’s little network that could has also boasted some degree of success in the realm of the fantastic. Riding the wave of Marvel superhero hits, ABC saw fit to continue the storylines of “Marvel’s Agents of S.H.I.E.L.D.” and “Marvel’s “Agent Carter.” In spite of lukewarm ratings, ABC also saw fit to continue the lighthearted quests of “Galavant” for another season. Also set for another year of reality-warping is popular fairy tale blender “Once Upon A Time.” Less successful shows, however, like mortality seeker “Forever,” vengeance-will-be-mine thriller “Revenge,” and return of the living drama “Resurrection” are all taking their final bows after this season finishes.

Stay tuned to GeekReply.com for more updates on your favorite genre programming.