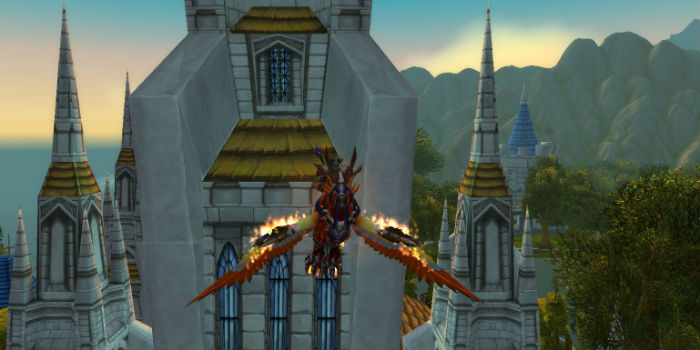 Warlords of Draenor was World of Warcraft’s most successful expansion in years pushing its subscription base up to 10 million players. It was greeted by rave reviews from across the web that hailed it as WoW’s return to the top of the MMO market. The only things fans felt was missing from the latest expansion was the ability to use flying mounts. Blizzard claimed that removing flying was an “experiment” to create a renewed sense of danger in the game world and encourage exploration.

Obviously not everyone was happy to see their ability to fly all across the map disappear, which is why Blizzard  promised to revisit the issue later down the line. This week lead designer Ion Hazzikostas made good on that promise during an interview with Polygon. His answer however isn’t going to appease the fans anger towards Warlords of Draenor or future expansions. Hazzikostas told Polygon that flying will not make an appearance in Warlords of Draenor and it may not appear in any future expansions.

Taking away flying would be a massive change in World of Warcraft’s gameplay, as mounted flight has been part of the MMO since 2007 with the introduction of the Burning Crusades, the first expansion to WoW. In the years after it was introduced Hazzikostas says that Blizzard has seen flying mounts create major problems in the game:

Having looked at how flying has played out in the old world in the last couple of expansions, we realized that while we were doing it out of this ingrained habit after we introduced flying in The Burning Crusade, it actually detracted from gameplay in a whole lot of ways.

While there was certainly convenience in being able to completely explore the world in three dimensions, that also came at the expense of gameplay like targeted exploration, like trying to figure out what’s in that cave on top of a hill and how do I get up there.

Hazzikostas says that Warlords of Draenor and the rest of WoW feels bigger opening it up to more exploration and immersion with players finding new secrets. He leaves very little hope in the interview that flying will stay an experiment saying that “At this point, we feel that outdoor gameplay in World of Warcraft is ultimately better without flying, we’re not going to be reintroducing the ability to fly in Draenor and that’s kind of where we’re at going forward.” He admits that Blizzard is considering opening mounted flight to certain areas in future expansions.

Even if they open up mounted flight to special sections in expansions after Warlords of Draenor there isn’t much hope that it will ever return as a main feature of the game. That isn’t sitting well with Warcraft fans, 24 hours after the interview went live the World of Warcraft forums were flooded with responses. 288 pages of complaint threads popped up with fans letting their frustrations loose and some fans are even cancelling their subscriptions.

All of the anger is understandable if you are a long time player, mounted flight has been part of World of Warcraft for 8 of the 10 years its been out. Collecting the rarest flying mounts and being able to see huge areas of the game from the sky is a longstanding part of the MMO. Now all of those flying mounts have been grounded and lost their biggest advantage and that isn’t going to help World of Warcraft’s subscriber base flourish.