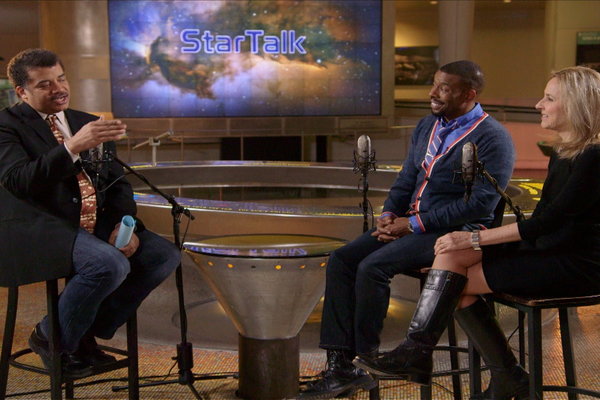 Hot on the heels of the immensely popular “Cosmos,” Neil deGrasse Tyson continues his quest to make scientific content and philosophical debate accessible to the masses with his new interview show “StarTalk.”

Building on the popularity of the eponymous podcast, National Geographic Channel brings science to the late night talk show circuit. “StarTalk” combines the natural wit and curiosity of host deGrasse Tyson with a clever gaggle of co-hosts, and then adds a guest or two and a live audience into the mix, creating an ideal setting for a hearty and heady debate. Sounds exciting, doesn’t it? In all seriousness, it’s worth a look, though.

DeGrasse-Tyson and his cohorts are witty and erudite in their own right, and thus far, have engaged top-notch minds like Richard Dawkins, Dan Savage, Christopher Nolan, Norman Lear, and ex-Pres Jimmy Carter in discussions about the crucial issues facing science and society in our modern era.

Never afraid to pull punches, the lively chats so far have included the always contentious debate about science and religion with Richard Dawkins, “Star Trek” and it’s morality in modern times with George Takei, and the dangers of an uninformed populace in the Information Age with Arianna Huffington. Other topics include the usual suspects such as politics, pop culture, and general science, as well as his guests’ lives and backgrounds.

And, unlike many popular debate shows of our era like “Politically Correct,” “The Sean Hannity Show,” or “Hardball,” deGrasse Tyson is genuinely interested in having a real discussion (not just a shouting match) and legitimately tries to maintain an open mind to differing points of view. He also selects intelligent guests who are more in tune to spirited debate than they are in regurgitating talking points.

“StarTalk” also differs from traditional late night talk in that he isn’t just on the air to stroke celebrity egos. With a similar motive to his hosting of “Cosmos,” deGrasse Tyson takes to the air not just to entertain, but to educate. So, if you’re tired of the same old nightly chatter, bring your thinking cap, enter the fray, and prepare for laughs and fun with science and friends. You never know, you might actually learn something.