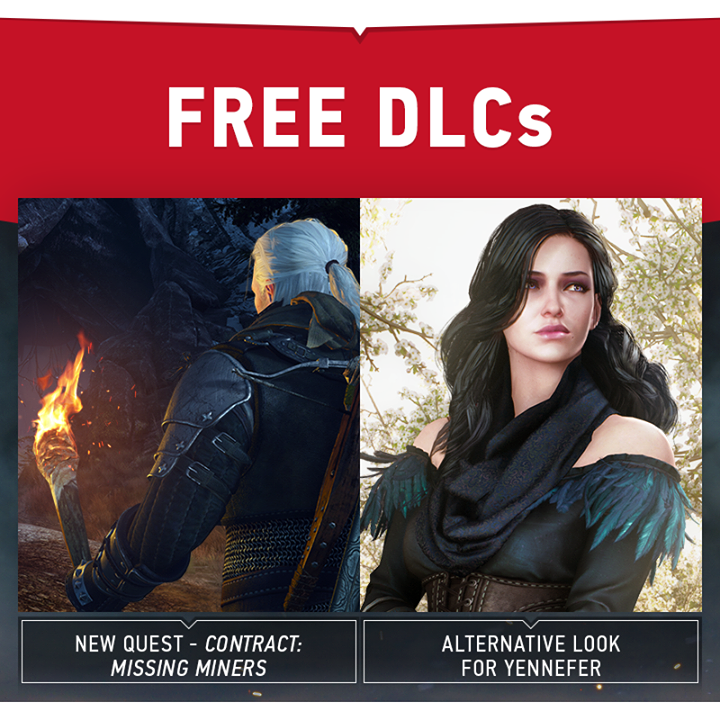 Yesterday has been a busy day for all those playing The Witcher 3 Wild Hunt, the new entry of the series developed by CD Projekt RED released last week in all regions on consoles and PC. Not only the new PlayStation 4 version patch has been released in Europe, but also new detailson this week’s free DLC packs have surfaced online.

Today, the two new The Witcher 3 Wild Hunt free DLC packs have been made available in all regions and on all formats so everyone can enjoy the new content right now. The two packs include an alternative look for the sorceress Yennefer of Vengerberg and a new quest, Contract: Missing Miners, which will task players with finding disappeared miners from the small Skellige village, an apparently simple mission that will probably include plenty of troubles.

These two free DLC packs and the other two that have been released last week aren’t the only free DLC packs The Witcher 3 Wild Hunt will receive in the near future. A total of 16 free packs will be released for the game, with details on the packs coming every week. Bigger expansions called Hearts of Stone and Blood and Wine will also be released later this year and early the next respectively, further expanding the already expensive experience of The Witcher 3 Wild Hunt.

Yesterday some new details have also emerged on the upcoming The Witcher 3 Wild Hunt Xbox One patch. CD Projekt RED’s Marcin Mamot has confirmed on Twitter that the new patch will include a 30 FPS lock for this specific version of the game. The patch is currently in certification phase and it should be released soon if everything goes well.

The Witcher 3 Wild Hunt is now available in all regions on PlayStation 4, Xbox One and PC. The latest DLC packs are also available for download for free right now on all formats.