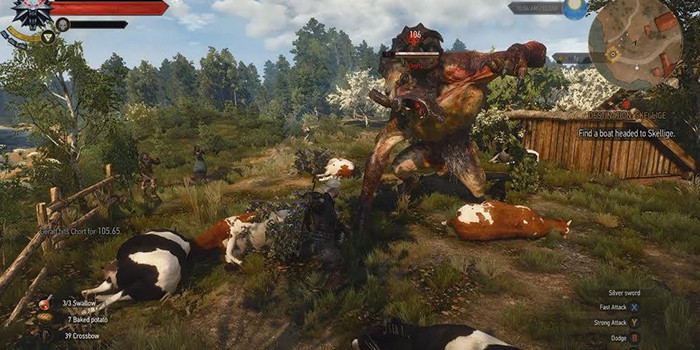 CD Projekt found a unique way to eliminate the infinite money exploit in the Witcher 3, a massive cow defense monster

Anytime a game like the Witcher 3 arrives it’s only a matter of time before gamers find exploits to make the game easier. Usually it’s a glitch that allows them to make infinite money and that is exactly what one player found in the Witcher 3. Discovering that if you slay a few cows, scoop up the hides, then meditate to respawn the herd you have a literal cash cow. It doesn’t offer a huge amount of money but for low-level players it’s a great way to earn money quickly.

Witcher 3 developer CD Projekt Red caught onto the scheme soon after it was discovered and created a unique way to stop players from taking advantage of it. In the latest patch for the Witcher 3 CD Projekt Red introduced something they call in the patch notes a “Bovine Defense Force Initiative” It turns out the Bovine Defense Force is actually a giant cow defense monster that can easily wipe out players who go on a cow killing spree.

It would have been easy enough for CD Projekt red to eliminate the cow hide exploit but the cow defense monster fit their style better. Even though the giant three-headed beastie is only meant to dissuade low-level players from taking advantage of those innocent cows. As fast and strong as the cow defense monster looks it won’t stand a chance against players level four or higher.

High-level players probably won’t run into the cow defense monster all that often since the cow hide exploit provides so little money. It’s only low-level players looking for cash early in the game who have to worry about the defender of the cows. Besides players have already found a more profitable seashell exploit in the city of Novigrad. Now we have wonder how long it will be before CD Projekt Red comes up with a creative solution for that exploit as well.