(Update: Scott Cawthon has just changed the release date of Five Nights At Freddy’s 4. The game will be coming on August 8 for the 1-year anniversary of the first game’s release.) 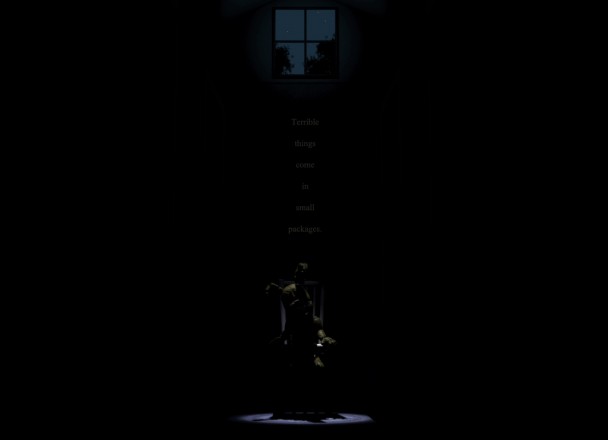 Very creepy. The image shows the main animatronic from the third game, Springtrap, sitting underneath a dark window. The text reads “Terrible things come in small packages” and the image seems to feature a home-like setting, removing us from the usual pizzeria setting.

Just like the previous Five Nights At Freddy’s 4 teasers, brightening this image reveals more information. Springtrap is actually surrounded by four doors, which some have suggested may indicate that there will be four entrances to worry about in the fourth game. There also appears to be a small… something to the right of Springtrap. It looks like a blip on the image, but fastidious fans may be able to find something in it. 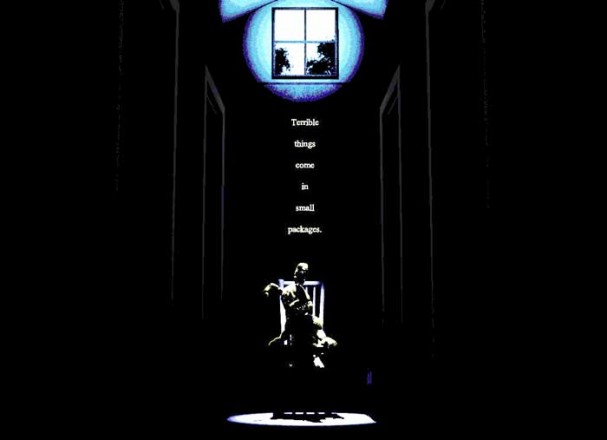 This Five Nights At Freddy’s 4 teaser is also the first time in the series that the outside has been shown, which could mean something. Finally, the weird phrases “Cyh gvh gpe” and “All Content Copyright 13,12,11 Scott Cawthon” appear in the page’s code. Using the Caesar key as shown in the top comment here on Reddit, that spells out “Plushtrap.” Is this a plush version of Springtrap?

For those out of the loop, Scott Cawthon has been teasing Five Nights At Freddy’s 4 for the past couple of months. Every couple of weeks or so, he has added a new image to his website teasing the fourth instalment of the series, which will be released on October 31. The first teaser was a Springtrap-Freddy hybrid, followed by Nightmare versions of Bonnie, Chica and Foxy. Then we saw Freddy’s hat and bow tie, and the previous teaser was Freddy’s belly with a set of teeth in it. Yes, it was just as weird as it sounded.

In addition to this latest teaser, Cawthon recently added the previous teaser to his IndieDB page. He labelled it NFB, which some fans think may mean “Not Fredbear” or “Nightmare Fredbear.”

Fans are excited to see what Cawthon throws at them next.