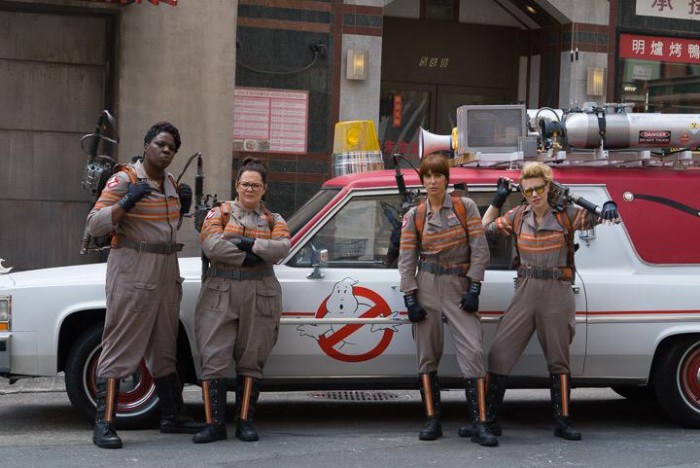 With Bill Murray now officially signed on, 2016’s Ghostbusters reboot is really picking up momentum. Whether you like or loathe the Paul Feig’s positron-glider revival, hype is building as the film ramps up production. How are fans reacting to a sneak peak at props and scenes? As a GB fanatic myself, I’ll discuss the major reveals so far.

The return of Ecto 1 needed to blend the classic Ghostbusters feel without creating an exact replica of the original. At the same time, it’s also important to avoid making the same mistakes Ghostbusters II did by overdoing it. The Ecto 1-redux was more a mobile billboard than a spook-fighting vehicle. The new lean mean busting machine harkens back to old times but offers enough modifications to the original design to avoid being a tired retread of the original.

Fan reaction has, overall, been a mixture of love and hate, with some loving the updated car (those suffering from 80’s nostalgia will especially enjoy the Reagan-era hearse). Others are nonplussed about the boxier version. I’ll admit that I miss the classic late 50’s lines of Ecto 1, but I can appreciate the continuity. The 1989 Cadillac Brougham is roughly thirty years older than the new film, which embodies the junk to gem vehicular ethic of the original film. And as a child of the 80’s, there’s something fun about seeing that boxy old Caddy rolling around with a spiffy red and white paint job, sporting that particular decal on the side.

“Why worry? Each of us is wearing an unlicensed nuclear accelerator on his back.”

Paul Feig stirred up a lot of excitement after releasing images of this ubiquitous specter-busting tool via Twitter (with the hashtag #whatyougonnashoot). Similarly to Ecto 1, there are some distinctive similarities between the original proton packs and the reboot’s gear. For the most part, though, the new model looks a little boxier, but offers a fun merger between the classic device and a technologically updated variant. And, since we live in a high-tech era, a modernized, digitized proton pack follows organically with the times.

Fans have generally had a positive reaction to the new gear, but you can’t please everyone. Still, how can you hate on a proton pack of any sort?

“What are you supposed to be, some kind of Cosmonaut?”

How can you top the iconic Ghostbusters onesie? Simple. You can’t. And these prison-esque Ghostbusters 2016 uniforms have garnered a bit of online derision. At the same time, they do mimic elements of the original design, as well as keeping the original iconic No Ghost logo. And the designers would have been foolish not to stick with the established look. As long as they stick with the logo and the beige jumpsuits, the orange stripes shouldn’t make much of a difference. In adhering to an old marketing saw: if it ain’t broke, don’t fix it.

As the film finishes shooting, fan trepidation is naturally high. Ghostbusters fans are still divided on the next generation of paranormal investigators and will likely stay that way until the movie release. Some simply aren’t fond of an all-female lineup. Personally, I feel a female cast could put a fresh spin on the series. Others feel that the series shouldn’t be meddled with at all. But the new cast is strong and funny, much like the original one. The script, according to those who’ve read it, is a solid blend of funny and scary. And the cameos keep rolling in:

“I’ve worked in the private sector. They expect results.”

Bill Murray is set to return to the ethereal plane (film, of course), although there’s no confirmation as to whether he’ll reprise his Peter Venkman role (fingers crossed!). Entertainment Weekly also reported that Dan Aykroyd shot a scene with Kristin Wiig, so two out of four OGBs will see a little action in the reboot. Rocker Ozzy Osbourne is rumored to have a brief scene in the film as well.

While it’s difficult to tell what’s hype and what’s legit, the film does show some promise. However, it remains to be seen how well the ensemble will come together, and how deftly the story is written. In all hopes, Paul Feig can convert Ghostbusters 2016 from a superfan’s dream to a vital addition to the series. The gals are set to take on the ghouls this coming July 16, 2016.