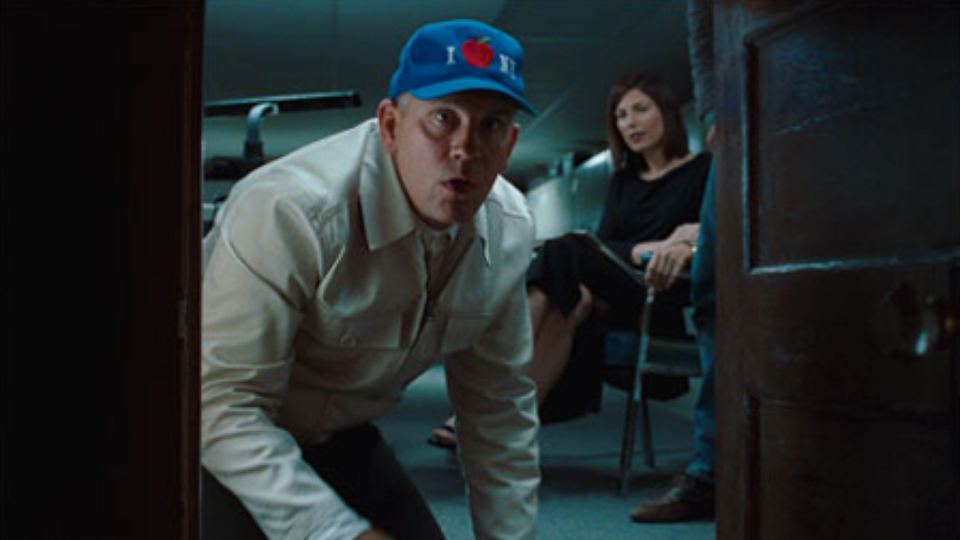 During the course of any active week, most of us are lucky to sit down and catch our breaths—much less watch an engaging movie. Work, school, personal activities, and social events often rob us of any leisure time. And if you have kids, forget about stretching out on the couch for a moment and watching anything that isn’t child-friendly. The weekend isn’t just a chance to escape work, but also a fantastic opportunity to catch up on some of the heartier cinematic fares that languishes on your watchlist. This weekend, set aside some time for a little brain food. Relax, crack open the snacks, and enrich yourself with a clever flick or two.

Action movies aren’t always known for their brains, but once in a blue moon, a film like In Bruges comes along. If you like your action with a hearty dose of dark comedy and philosophy, this picture might just blow some holes in your thinking cap. Even if you don’t watch it for writer and playwright Martin McDonagh’s biting verbal repartee or intriguing social commentary on the nature of violence and the morality of criminals, there’s still plenty of over-the-top action and satirical violence to be enjoyed.

The film stars Colin Farrell and Brendan Gleason as two rakish hitmen. After a contract killing on a priest goes awry, with Farrell accidentally gunning down an innocent bystander, the chatty assassins flee to Belgium to escape their psychotic boss. The dialogue between the two leads positively crackles, and fans of actor’s actor Ralph Fiennes will appreciate his hyper-animated portrayal of a gangland bigwig as well.

If you’re a fan of David Lynch, then you’ve probably already seen this film and are familiar with the winding road of his story structure and his dreamlike logic. For those of you who haven’t seen his work and want to give him a try, this probably isn’t the best place to start—despite the picture’s critical acclaim. However, when you dispense with any expectations of a linear narrative, you’ll likely find yourself engrossed in Lynch’s unreal world.

Similar to his other offerings, Mulholland Drive follows in Lynch’s film noir-influenced style. Naomi Watts stars as would-be ingénue, Betty Elms, who comes to Hollywood with stars in her eyes, like so many other films and songs portray. Her arrival at an apartment in the Hollywood Hills coincides with a young woman, who wanders to the house after surviving a car crash. Her arrival sets in motion a gauzy sequence of events that weave in and out of the seedier side of Los Angeles, poking and prodding at the tarnished edges of the celebrity lifestyle, as well as love, loss, and vengeance.

If you’re looking for a brain friendly film with a lighter edge to it, this Coen Brothers’ offering provides a hearty dose of mental stimulation along with a sense of whimsy perfectly suited for weekend viewing. Known for their eccentric characters, convoluted plots, and darkly comedic elements, the Coens always manage to turn an interesting story into a labyrinthine film wonderland.

Successfully combining the acting chops of George Clooney and John Turturro with a punchy script, loosely based on Homer’s The Odyssey, O Brother takes place in the Deep South of the 1930s. After escaping from prison, three convicts search for their ill-gotten gains, buried prior to their arrest. Between hunting for their loot, evading swarms of determined cops, and recording a hit song, the plot places the brothers in a series of amusing, tense, and at times socially relevant situations. Fans of folksy bluegrass will also appreciate the film’s soundtrack, which is loaded with banjo picking delights from Alison Krauss, Emmylou Harris, and others.

The latest offering from French New Wave auteur Jean-Luc Godard, Language is a stunning 3-D feast as well as an engrossing exploration of the myriad of ways life can fall apart when couples fail to communicate. Pulling on the strands of two disparate stories (if that makes any sense), Godard creates a sparse tale with powerful visuals and surrealistic storytelling.

The plot, if you could call it one, concerns two couples in similarly decaying orbits, whose lives are interconnected by happenstance as well as their shared relationship woes. As the title suggests, though, words don’t really do this film justice. It’s both an artsy, non-linear narrative and a meditation on the failures of language, the nature of love, and devastation of betrayal. This is a film best watched, set to the side, and then streamed again for renewed ingestion and further digestion. Hint: don’t dismiss the dog as irrelevant, because he plays an intricate role in the film.

For those looking to escape the air-headed vampire flicks littering the landscape since Twilight bludgeoned the country with sparkly bloodsuckers, this film is the antidote. Sure, the film is steeped with romantic subtexts, but they are nothing like what you’d find in a teeny bopper tale. Far from waterlogging the film, the lovey-dovey bits of this picture actually enhance the creepy ambiance which Swedish director Tomas Alfredson builds throughout Let the Right One In.

Revolving around Oskar, a bullied twelve-year-old boy, the story follows his burgeoning friendship with his new preteen neighbor Eli. Although approachable at first, she warns him that they could never be friends—a point echoed by her live-in  guardian. It also turns out that his would-be next door paramour (non-spoiler coming up) is a vampire. When her companion is captured while searching for fresh meat, Eli finds herself alone in the world with the exception of Oskar. Right One delves into themes of childhood, romance, gender, bullying, and violence without providing any easy answers.

Before creeping us out with his horror thriller Black Swan, depressing the hell out of us with Requiem for a Dream, and confusing us to near the breaking point with The Fountain (any one of them are easily honorable mentions here), Darren Aronofsky showed off his directorial insight with this gritty mathematical thriller. I know, bear with the math part.

Jobless and living in a rat-hole NYC apartment, Max Cohen fosters his obsession with numerical patterns. A number theorist, one who believes that life’s indelible mysteries are navigable via mathematics, Max solves complex equations inside his mind—something he’s constantly also on the verge of losing as well. When not racked by horrible headaches, he battles social awkwardness by hanging out with a handful of friends and associates, including his former mentor. The creator of a stock market number-crunching program, Max discovers that his computer has spat out a long sequence of numbers before crashing. The seemingly random 216-digit number starts Max on a harrowing saga through the encoded world of numerology, ontology, and even classified government projects. Not merely for number fanatics, Pi is a complex riddle filled with intrigue, drama, and big questions.

Before returning to feature films, Greg Mottola was best known for his offbeat TV series Arrested Development and Undeclared. Writing for comedic television developed his nuanced if hyperbolic style which accurately embodies and parodies the angst of the maturation process. His unique flair for cheeky dialogue also serves him well in the world of coming of age films.

After graduating college, would-be grad student James (Jesse Eisenberg) discovers his parents are experiencing some fiscal difficulties. In order to support himself, he’s forced to find work at an amusement park—the titular Adventureland. He finds himself working alongside a gaggle of odd ducks, most notably the alluring Em (Kristen Stewart). Driven by the need to lose his virginity, he tries to seduce her by virtue of his collegiate intellect. It’s not that she’s unimpressed (she’s not) by his smarts, but she pines for an older, hipper rock and roller (played by Ryan Reynolds). Adventureland may not be the headiest film on the list, but it does offer strong characters and realistic situations, combined with the awkward laughs that unmask the vulnerability beneath James’ mask of pretension.

Filmed in a documentary style, The Conspiracy revolves around two would-be filmmakers who probe the fringe world of (wait for it) conspiracy theories like the 9/11 Truth Movement and the ever-popular New World Order plot. Treading the line between reality and paranoia handily, the film is adept at keeping its viewers off-balance. The writers also use “actual” rituals and conspiracy websites and sources to make the story feel hyper-realistic.

Drawn in by watching a video lampooning conspiracy buff Terrance G., two filmmakers set out to capture the man’s paranoiac world. Initially cynical, the pair climbs further inside his work when their subject disappears after what’s considered to be a borderline-psychotic outburst. Finding an ominous organization known as the Tarsus Group, the two camera jockeys become entwined in, as you can imagine, a diabolical plot to rule the world. Or not. The vérité style of the film ramps up the tension while the director allows the paranoiac nature of conspiracy theories to do all the work without drawing any conclusions or passing judgment.

Get ready for one of the most whacked out, brain-bending movies of all time. To those unfamiliar with it, 2001 is Stanley Kubrick’s masterful science fiction pot boiler which combines elements of history and evolutionary theory with a whole host of sci-fi tropes like spaceships and homicidal robots. He also waxes philosophical about the distant past and future of our species.

The discovery of mysterious 4-million-year-old monolith sets in motion a scientific quest to uncover where the signal emanating from it originated. In order to track it down, Dr. David Bowman and the crew of Discovery One blast off for Jupiter under the dubious guidance of the ship’s emotionally unstable computer, HAL 9000. After a series of “mishaps” cripple their vessel on its mission of discovery, the crew is forced to make a few unexpected repairs.

Warning: although brilliant, the film can be extremely slow at times. Try not to fiddle with your smartphone, or you might miss the revelatory and perplexingly brilliant nature of this picture.

Some days, living inside our own heads are painful enough. On those days, the best form of intellectual escapism probably isn’t jumping inside someone else’s head for an hour and a half. On a good day, though, experiencing life through someone else’s eyes is the perfect day trip out of reality. And Spike Jonze’s dreamlike film is one hell of a trip.

Disaffected puppeteer Craig Schwartz (John Cusack) lands a new job at a LesterCorp, but he also finds a new lease on life—well, someone else’s life anyway. Bored with his menial existence, he finds a doorway which leads directly into character actor John Malkovich’s mind. He introduces his sexually confused wife to the doorway, who fixates on her newfound diversion. As their new virtual reality tears their lives apart, the metaphor of puppet and puppeteer comes frighteningly full circle, with hilarious and devastating results. Far more than just a dark comedy, the film is a rumination on our sense of self, as well as a metafictional reflection on our cultural need for escapism and its fixation on celebrity lives.