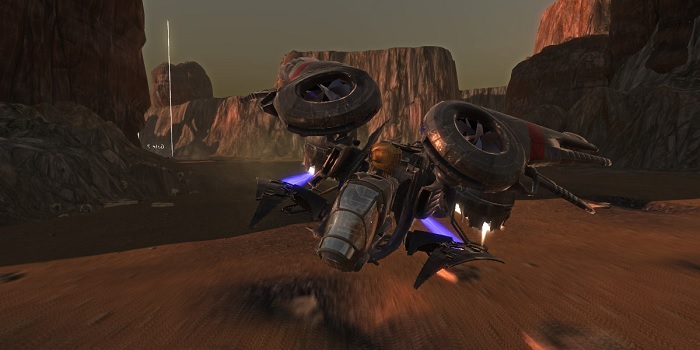 Vector 36 was a stand-out at PAX Australia’s indie floor. Not only was it different to anything else being shown, but it’s different to pretty much anything else on the market today. Vector 36 has players racing in hover ships, called ‘Skimmers,’ with a completely unique control system as well as vehicle customisation. It’s also designed for VR devices, so it attracted quite the crowd on the show floor. I spoke with Ryan Mckee, director at developer Red River Studio, about the game.

“I really wanted to do something that was kind of Gran Turismo-ey, but just different,” Mckee says. “It all kind of coagulated into the idea of having a simulation-based sci-fi game.”

Vector 36 takes place on the surface of Mars and bills itself as a “physics based racer.” It’s not the sort of game most people can pick up and easily play – the unique control system, combined with the fact that there aren’t a lot of other games out there about piloting hover ships, means there’s a steep learning curve. It’s a very different direction to many of the other indie developers featured at PAX, most of whom had focused on building games that anybody could pick up and instantly play. 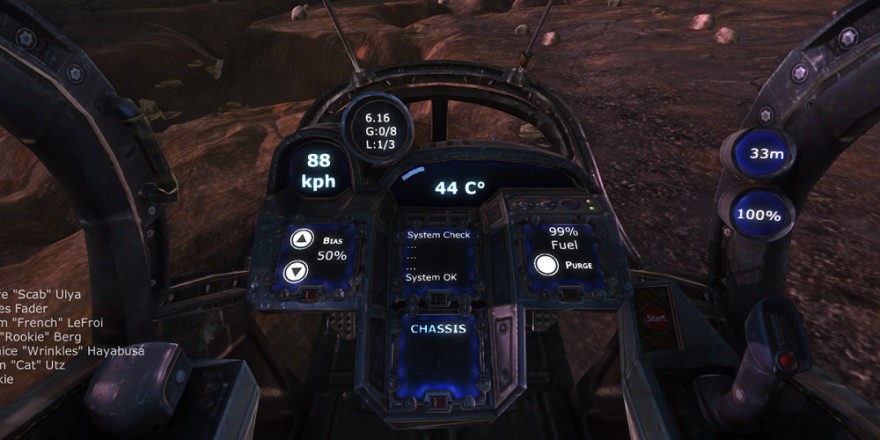 “It’s a steep learning curve,” Mckee says. “It’s meant to be a simulation. It’s not an arcadey game, it’s not really meant to be taken up and immediately gotten into. It’s a bit like a flight simulator, where you have to know which buttons do what and what the dynamics behind it are. Especially when it comes to building your own ship, because you have to understand the physics behind it.”

But Mckee is working on making it easier for players to overcome the learning curve by providing places where people can find tutorials and demos about gameplay. “I’ll either use a wiki page or some Youtube videos,” he says.

Although Vector 36 was built to be used with an Occulus Rift, Mckee says you don’t need a VR headset to enjoy the game. “You can play the game without Occulus at all. It’s built for Occulus and with all the VR bits, but you can just play it like any other game.”

Vector 36 is Mckee’s first solo commercial game project. Before this, he’s built a lot of mods and worked on other indie teams. Mckee says developing for the Occulus has become much easier over the last few years. “Initially, it was very difficult because you had to have specific camera set-ups and optimisation issues. You had to basically rewrite a lot of the way the camera worked just to get it to work with the Occulus. But now with the latest runtimes for Occulus, you just hit a button and it works. You don’t have to mess with any cameras and it takes all the post-processing. If this had been made, maybe a year ago, it would have been a totally different game.”

While Vector 36 is essentially working as a single-player game, Mckee has yet to add multiplayer. “I’m going to do my best to get multiplayer out there, and I want to get full Steam VR. I want to have not just the headsets, but the handsets as well. You should be able to slam the hatch shut on your cockpit door, you should be able to hit the starter button, hit all these other buttons, and basically control everything with just your hand motions. So that’s the goal.” Mckee says all of that should be ready by the planned release date.

Vector 36 has been in Early Access for a couple of weeks and Mckee is aiming for a rough release date of February 2016, “give or take a month.” It’s going to be released on Windows and Mac, and Mckee is working on getting the game ready for Linux. He’s also working on securing an Xbox One and Playstation 4 release, but so far he can’t confirm that there will be a console release. “I want to get it on Steam, polished and ready to go first. And then I’ll port it over to others once that’s done.”