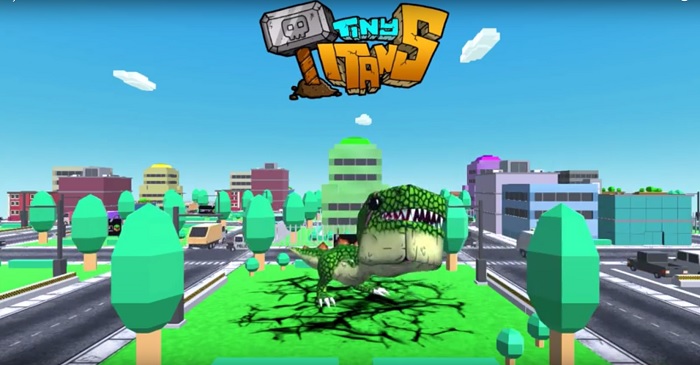 There’s something uniquely satisfying about games where you play as the monster, stomping, crashing, destroying everything in your path. Australian indie team Terran Studios has captured that feeling in their mobile destruction-fest Tiny Titans. Players guide their monster through a city, trying to destroy as much as they can before being shot down by the police or having their time run out. I spoke with Michael Breen, managing director, and Tim Schmidt, technical director, about Tiny Titans.

“We did an in-house game jam when we first started the company, just to give us some ideas,” Schmidt says. “We liked this idea, so we went with it. We also wanted to go with something small-scale, since we’d just started the company, we wanted to make sure we had all our processes right. Although, we were aiming for three months and it ended up being eight months because we just kept adding ideas to the game.”

All of those ideas came together to form Tiny Titans as it is now. “It’s a mobile destruction game. Basically, you need to destroy as much of the city as you can before the timer runs out,” Schmidt says. “Destroying buildings will give you more time, so you have to aim for buildings as much as you can. But the cops are always going to be chasing you, so you need to take out the cops as much as you can too.” 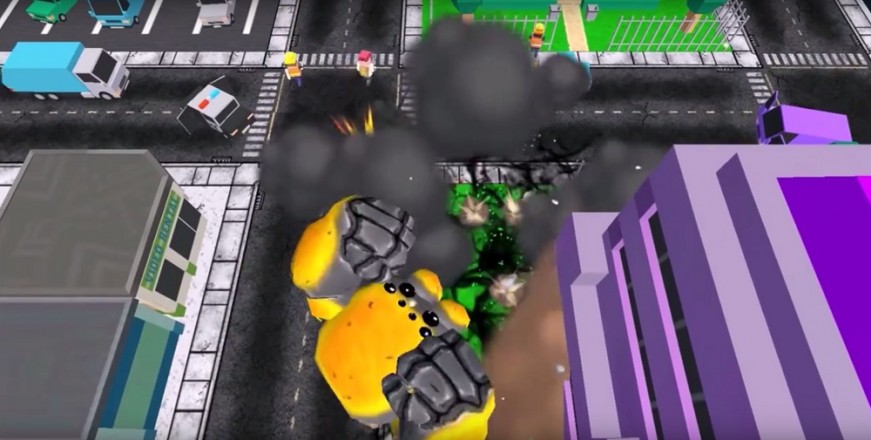 Schmidt says they decided to keep any kind of gore out of the game because they wanted their target audience to be kids. “Because kids are our target market, we’ve also gone for an ethical monetisation plan. That way, kids aren’t going to be bugging their parents to get them to buy stuff all the time. There is the opportunity to spend money if you want to, but we’ve made it so it’s not necessary at all. You get coins from multiple different areas, there’s buildings you can destroy to get coins, and there’s also an achievement system that will give you coins and that will unlock some of the skins.”

Essentially, there’s nothing in Tiny Titans that can’t be unlocked by simply playing the game. It also has rewarded ads, which is a system many mobile developers are starting to adopt. Rather than forcing players to sit through ads, the game asks the player if they would like to watch an ad in exchange for some kind of in-game reward – in the case of Tiny Titans, watching an ad will give the player some coins. Coins are then used to unlock things in the game.

“The parents that we’ve had play it, who’ve had their kids play it, have had a great response,” Schmidt says. “They all really seem to be enjoying it. We’d only just released it and weren’t sure what people were going to think, so that’s really good.”

I asked Schmidt what he thought about the way mobile games and “freemium” games often get a bad rap. “I can definitely understand that,” he says. “It comes down to the game itself, obviously. The developer needs to make money, otherwise they can’t keep making games. But you’ve got to find practical ways to doing it. That’s why we’ve got the rewarded ads in there – it’s an easy way for us to get into it without annoying anyone.”

Schmidt says Terran Studios has been conscious of the fact that choosing children as their target market means they need to show extra restraint when it comes to in-game transactions. “With the target market we’re going for, it’s not very ethical to exploit that. So that’s why we’ve got the model we’ve got… We never wanted there to be a paywall.”

“Everything just unlocks as you play,” Breen says. “I think it averages out to around three hours of play to unlock each titan. It also adds to the replayability, which is something not a lot of mobile games have. Each titan has its own abilities – some charge ahead, some are stationary. The unicorn shoots rainbows.”

Currently, Tiny Titans is only available on Android. Terran is working on finishing the iOS version, which they believe will be ready in approximately five weeks. “We want to make sure we test everything properly – we don’t want to give people a broken game,” Breen says.

Terran prioritised Android over iOS in this case because they knew they could get the game released more quickly via Google Play than via Apple’s App Store. “We uploaded the morning of PAX, and it only takes a couple of hours for it to go through on Google Play. It takes about a week on the App Store. Plus, we all happen to have Samsung phones, so we can test it.”

Breen says they had originally planned to make a game for PC rather than for mobile because they had missed the mobile boom. But the growth in the mobile sector in South America and Asia convinced them to turn to mobile development. “They’re now getting that mobile boom, so the market has exploded.”

The reception to Tiny Titans has been very positive, Schmidt says. “We haven’t had a single complaint, and we’ve had people coming back, asking for more free stuff and characters.”

“I keep getting a lot of kids dragging their parents back to keep playing,” Breen says. “The best reception to get is the fact that kids don’t give the phone back, which helps our motivation to keep developing. We wanted to target kids, and obviously they’re going to be harsh critics if it’s bad, but they just keep coming back.”

“And a lot of people who are coming by, who at first are like ‘nah, this isn’t my thing,’ give it a second and then they want to download it,” Schmidt says.  That positive response can be a powerful force for indie developers.

After Tiny Titans has reached all mobile platforms, Terran Studios plans to release more characters and maps for people to use.