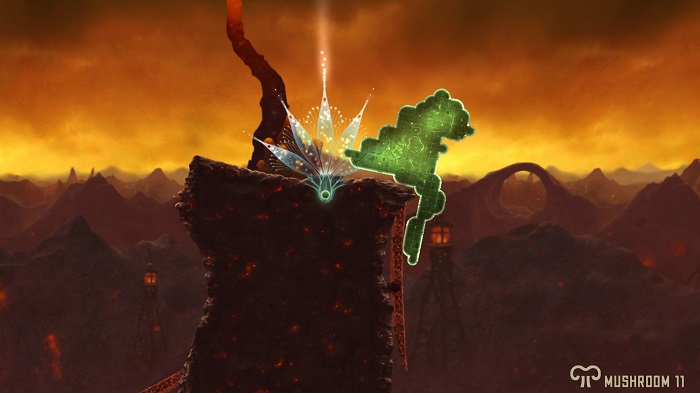 Since its release earlier this year, indie title Mushroom 11 has exploded across the internet. After being supported by the Indie Fund and becoming a finalist for the IGF 2014 Excellence in Design, it was met with critical acclaim across the board. Basically, the story of Mushroom 11 is every indie developer’s dream. Between its unique mechanic and intriguing theme, it’s easy to see why the game has reached this level of success. I spoke with Itay Keren, creative director of developer Untame, and Julia Keren-Detar, co-designer, about the game.

“We originally built Mushroom 11 for 2012 Global Game Jam, which is an event all around the world where people get together and form groups and then make games based on a theme that is given by the organisers,” Keren says. “The theme that year was the Ouroboros, which is the symbol of the snake eating its own tail. What I really wanted to do was have some sort of platformer or puzzle game where the protagonist has some sort of a cyclical nature of destruction and growth – like, you destroy it on one side and it grows on the other.”

Keren experimented with many different ways of implementing this core idea. Eventually, he settled on the idea of having a group of cells clustered together, with the ability to remove some of the cells in order to shape the group. That idea formed the organism at the centre of Mushroom 11. The central mechanic is erasing parts of the amorphous blob to make it move and grow in other directions. That central mechanic is also what formed the game’s world. 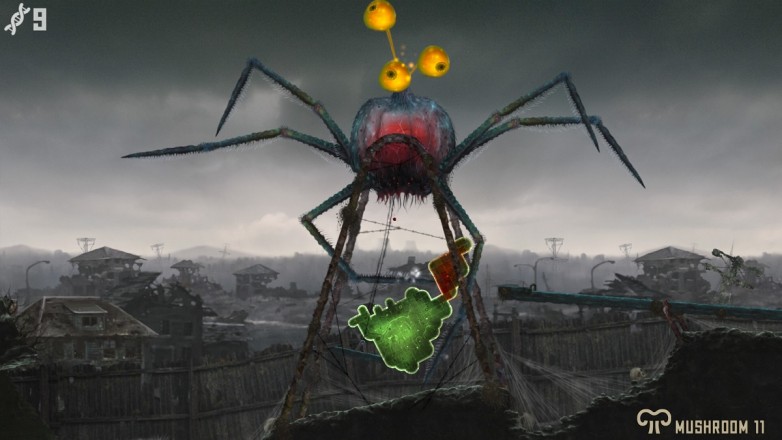 “Everything came together because of the mechanics,” Keren says. “The mechanic is about destruction and growth. And it was very clear that that needed to be translated into the world in some way. And a lot of our ideas were already thinking about the future of the human race and what we’re doing, the destruction and regrowth and what it means to us as human beings. That gave us the idea of a post-apocalyptic world with no humans, it’s post-destruction. The whole thing came together really well.”

“We were also really interested in photographs of nature taking over abandoned places,” Keren-Detar says. “There’s something really interesting about that because it’s weird seeing places where humans lived, and there aren’t any humans there. It’s post-apocalyptic, but it’s also full of growth.” 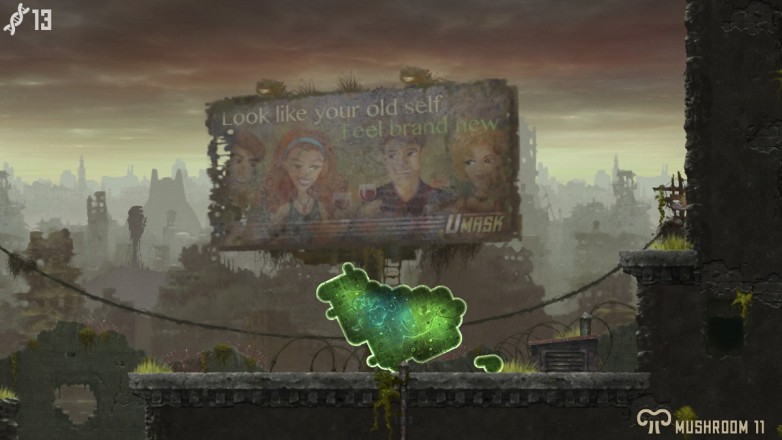 That means the game gets very difficult in later levels. “The game is not just exploring. It actually challenges you.”

The team behind Mushroom 11 grew over the course of development. At first, it was the husband and wife duo of Itay Keren and Julia Keren-Detar, but when Keren-Detar had to return to full-time work, Keren worked on the game with artist Simon Kono. Later on, Keren-Detar rejoined the team and Kono’s wife, Kara Kono, started working as the game’s producer. Untame became a four-person studio made up of two married couples. On top of that, The Future Sound Of London licensed their music for the game and Power Up Audio created the sound effects.

As for why they named it Mushroom 11, Keren-Detar says it was the result of research into recent science. “We came up with the name early on. We were trying to figure out what to identify this organism of cells as. It reminded us of a fungus or a slime mould, but we thought mushroom was a better fit for it. We started researching different things like mycelium, and all the recent science that’s come out about using mycelium in various ways, and that filled in the story.”

“As for the 11,” Keren says, “it’s more of an internal joke. It found itself fitting into the story as well. We’re not going to give too many spoilers, but it’s definitely part of the story. If you look behind the scenes, you will see a lot of references.” 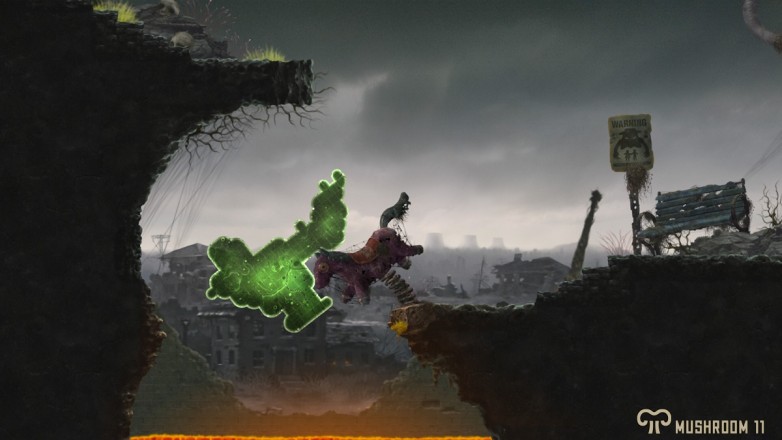 The story behind the organism’s creation is hidden in the background of the game, Keren says. They had the story take a “backseat,” hidden in the details of the game. “One of the things you may notice when you play, but are very likely to ignore, is that it has a lot of images and artefacts and graffiti behind the scenes. If you put everything together across the entire game, you will get a clearer picture of what actually happened.”

Keren says the story isn’t told chronologically and piecing it all together is meant to be a challenge. But he says all of the information needed to work out what happened to the world is there. “Obviously there was some sort of experiment, and I’m not going to say too much, but if you go into levels five, six, and seven, you will see a lot of information. And all of that information is very scientifically sound. We worked with two scientists, biological chemists, and tried to come up with an idea that could actually happen in real life.”

Keren says the community is starting to piece together the story behind Mushroom 11, but it hasn’t figured it all out yet. “We’re starting to see some people trying to come up with their own version, and some people got very… I want to say close, but it’s not a competition to see who’s closer to our version. Our version has a lot of layers, and a lot of these layers are hidden very deep in the images. But a lot of people really understood what happened to the world.”

“We had a very elaborate story,” Keren-Detar says. “But we never expected people to actually pick up on that. We wanted people to come away with a few main, overall points to the story, and to fill in the blanks on their own terms. The stories that people have come up with are very interesting.”

Mushroom 11 is available on PC, Mac, and Linux. Untame is working on bringing the game to iOS and Android tablets, and expect to have it ready in 2016.