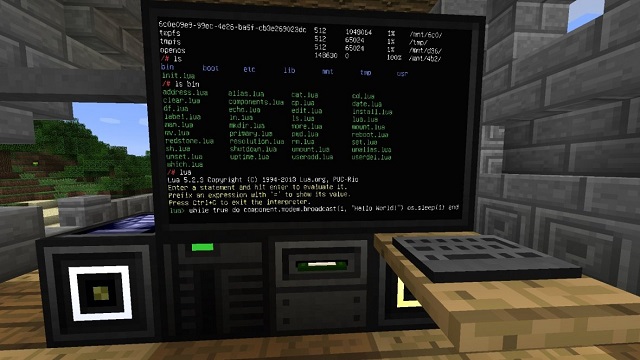 Apparently, hacking into normal computers is just too simple for some. One gamer has taken it upon himself to hack into Minecraft’s virtual world, and effortlessly find a way to sync with the physical realm. Known as Giannoug, the gamer/hacker used an OpenComputers mod combined with “redstone” (Minecraft’s version of electricity) which allowed him to actually turn on and off a real life smart bulb in his room.

I have a couple of WiFi-enabled bulbs near me, wouldn’t it be nice to be able to control them using Minecraft? My WiFi bulbs are some unknown, eBay sourced devices that use a crappy mobile app for control,” writes Giannoug on his blog. “[Next I] spawned a disk in Minecraft. By putting it inside a disk drive, OpenComputers creates a folder with a unique ID in the game’s files. This way I can add, edit and delete files from my computer to the computer in Minecraft. I used Sublime as the editor, I find it very tedious having to use the computer in-game to write code. After some researching and troubleshooting, I came up [with my own] script.

Giannoug was nice enough to share his work with the public, so if you’re anywhere near the level of tech brilliance as the man himself, then you’re welcome to try your own ways of merging Minecraft with our own world. The idea of a ‘smarthouse’ controlled via the game is being thrown around, however, this isn’t the only time that Minecraft has been merged with real life. In 2013, a man named Jim Rutherford and his son managed to coordinate wireless LED lightbulbs to match the day to night cycle in the computer game. While perhaps not as shareworthy of a lightbulb that can be flicked on and off from the screen, this particular gaming/real life hack is an interesting concept in its own right. Be sure to watch the making-of and demonstration of the lighting system below

Minecraft in general, has gripped the imagination of millions of gamers worldwide, arguably due to the expansive creative options, addictive co-op opportunities and the overall freedom it offers players. As a result, hosting parties have become hugely popular with Minecraft, whereby players use a dedicated server and play online with their friends. The 100% fail-safe security and large choice of operating systems offered on packages such as this, have provided a platform for gamers to play each other from around the globe.

Other than simply being a fun and entertaining game, the creativity options of Minecraft has opened up a wealth of opportunity to combine the simulated and tangible.