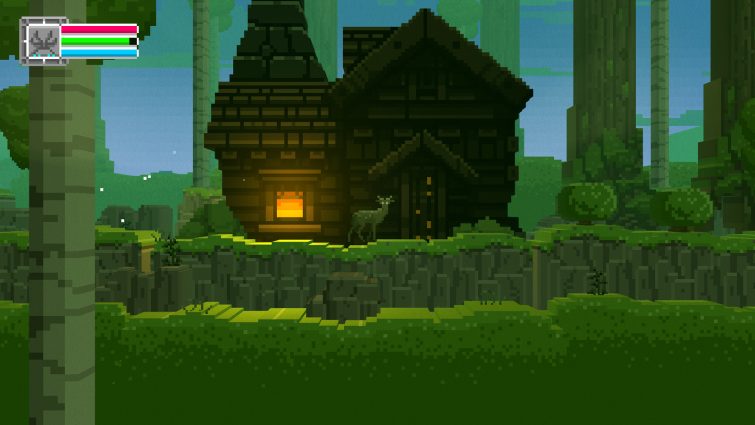 The Deer God originally released back in 2015 for the Xbox One and PC, but in November of last year, Blowfish Studios and Crescent Moon Games announced the pixelated platformer would be coming to the PlayStation 4. We just didn’t know when. Today, Ben Lee of Blowfish revealed The Deer God will hit PS4s and PS Vitas on April 25, 2017.

The game is all about controlling a deer with magical antlers in a pixel art, 3D world. You’ll have to platform your way through a variety of levels, battle other animal bosses, discover various powers, and of course, play the story. We’ve been assured the title is inspired by the things we loved growing up. For example: being out and about in the woods, building forts, encountering wildlife, creating makeshift equipment, and pretending to be a hunter.

“Blowfish Studios and Crescent Moon Games have had a long-standing friendship that started with CM Games publishing Siegecraft (with Blowfish as developer) on iOS back in 2011,” said Ben Lee, Blowfish Studios. “Since that time Blowfish Studios has branched out into self-publishing games on PS4. The Deer God caught our attention when it first launched on Kickstarter and PC, and we have been able to convince CM and the other developers to let us bring the game to PlayStation.”

Ben Lee also mentioned that this version is the most refined. There’s extra polish and fixes since The Deer God’s original launch. You can check out the game’s PlayStation trailer below. Are you interested in the unique platform game? Hit us up in the comments with your thoughts.