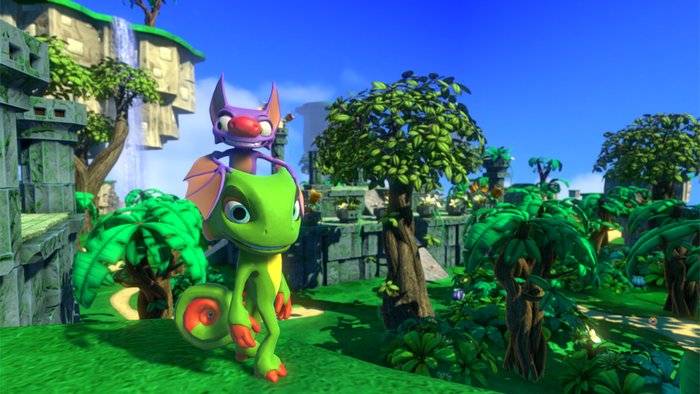 Yooka-Laylee releases in one week, and already the reviews are rolling in. Most of these reviews praise the game in one form or another, but some are more positive than others.

Many reviews state what most people assume: Yooka-Laylee successfully copies the look and sound of Banjo Kazooie. The game’s mechanics, however, are where opinions start to differ. The Guardian praises the variety of quests, missions, and puzzles players need to complete to collect Pagies, Yooka-Laylee’s Jiggies stand-in, while GameSpot is far more critical and claims some of these challenges are repetitive and simply not worth playing. Another divisive feature of the game is that players can choose how they progress;  Pagies can both unlock new worlds and expand existing ones. Destructoid loves this rather novel concept, but once again, GameSpot is slightly more negative, stating the feature is more tedious than anything else and doesn’t actually improve game worlds.

Polish is where Yooka-Laylee seems to suffer. Many, including independent Youtube channels such as ACG and GameXplain, cite camera and performance issues. And, some reviews are almost exclusively negative. For example, Jim Sterling thinks the game is absolutely horrendous, despite being impressed by the Kickstarter campaign and the demo.

The following are the scores given by the reviews mentioned in the article:

The Guardian: 4/5
“Younger players may be be less willing to forgive its anachronisms but for its target audience, those ageing mourners of a lost fashion in games, it’s a promise that’s proven worthy of backing.”

GameSpot: 6/10 (Fair)
“Ultimately, Yooka-Laylee’s best and worst aspects come directly from its predecessor. Despite attempts at modernizing the formula, its style of gameplay is still outdated, and it doesn’t stay challenging or interesting as a result.”

Destructoid: 8/10 (Great)
“Playtonic’s first foray is rough around the edges, but the center is so full of heart that it’ll melt away the more you play it. How much of that roughness you can put up with entirely depends on your history and mental fortitude for mascot platformers.”

ACG: Wait for a Sale (The channel does not give numerical scores)
“There’s a lot to like here from the strange puzzling way the game’s levels sort of intertwined to the moments when a jump and a roll attack work just right. But, in the end, even at the $39,99 asking price, I think the game’s real lack of really enjoyable main characters, the camera issues, and some bugs hold this back.”

GameXplain: Liked (The channel does not give numerical scores)
“I know I’ve been pretty tough on Yooka-Laylee in this review, and make no mistake, the technical and performance problems in the Xbox One version are every bit as severe as I’ve made them out to be. But, just as importantly, I’ve enjoyed my time with the game moment to moment and the Banjo Kazooie fan in me is satisfied with Yooka-Laylee as a whole, technical problems be damned.”

Jim Sterling: 2/10 (Bad)
“Yooka-Laylee is a game out of time, clinging so desperately to past glories it doesn’t seem to understand the Earth kept spinning after the N64 was discontinued. It’s everything wrong about the formative years of 3D platforming and it somehow retained none of what made the genre’s highlights endure.”

Most reviewers adore Yooka-Laylee and are willing to overlook the game’s shortcomings, although how much of that is due to nostalgia goggles is anyone’s guess. People whose interests are piqued by the reviews will have to wait until April 11th when the game launches on PC, Xbox One, and PlayStation 4. Sorry Nintendo Switch owners, you will need to wait a little longer.