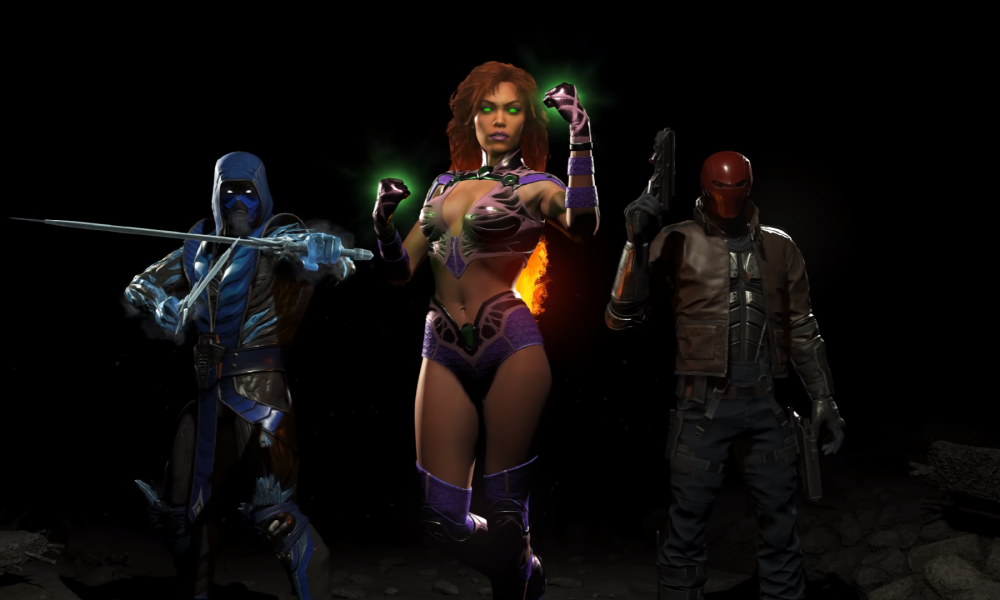 NetherRealm Studios has just revealed the first bit of DLC for its upcoming game Injustice 2. This DLC pack might only include a few new characters, but they are all fan-favorites with large fan-bases, so NetherRealm clearly knows what its customers want.

The trailer for the DLC tries an atmospheric approach where three characters who are hidden in shadows are slowly revealed. They are Starfire (Princess Koriand’r of the planet Tamaran), Red Hood (aka. Jason Todd), and surprise guest star Sub-Zero from Mortal Kombat. Regrettably, the trailer does not show how the characters will fight in Injustice 2, but we can probably assume that Sub-Zero will remain mostly unchanged from Mortal Kombat X and that Red Hood will use his guns. As for Starfire, it’s anyone’s guess how she will fight.

While we do not know how Starfire, Red Hood, and Sub-Zero will fight in this game, we know that NetherRealm Studios is working on two more Fighter Pack DLCs, each with three different characters. These characters’ silhouettes are shown near the end of the trailer, and while four of them are fairly indistinct, resident Aquaman-villain Black Manta and Mortal Kombat god Raiden’s silhouettes are quite obvious thanks to their iconic headgear. Since Sub-Zero is part of one DLC pack and Raiden is in another,  NetherRealm Studios might be planning to include one Mortal Kombat character per DLC pack. As for the identities of the other DLC characters, they are anyone’s guess. The large figure next to Raiden could be Solomon Grundy, Blockbuster, Atom Smasher, Atomic Skull, Mammoth, or any number of large, muscular heroes or villains. Likewise, the small person next to Black Manta could be Kid Flash, Beast Boy, Static Shock, Dove, or another young hero. Heck, it could even be the first Atom, who was just short man who liked to punch criminals. We will just have to wait for NetherRealm Studios to make another announcement.

On a side note, NetherRealm Studios likes to cater to gamers’ nostalgia with its voice cast. In Injustice: Gods Among Us, the two resident Teen Titans members, Cyborg and Raven, were portrayed by Khary Payton and Tara Strong, their respective voice actors from the critically acclaimed Teen Titans 2003 cartoon. The game even included Cyborg’s catchphrase, “Booyah!” from the cartoon. Khary Payton still voices Cyborg in Injustice 2, and Tara Strong is still part of the voice cast, so odds are good that Starfire will be voiced by her cartoon voice actress, Hynden Walch.

The Fighter Pack DLCs can be bought separately, although no price has been announced. Alternatively, gamers can buy the Ultimate Edition of Injustice 2, which will include all three Fighter Packs. Injustice 2 is scheduled to release May 16th for the PlayStation 4 and Xbox One.

Matt DavisOctober 2, 2020
Read More
The Best Star Wars Games You Can Buy During the May 4th Sale
Arrow Episode 5×20 “Underneath” Recap and Review