Kingdom Come: Deliverance out in 2018 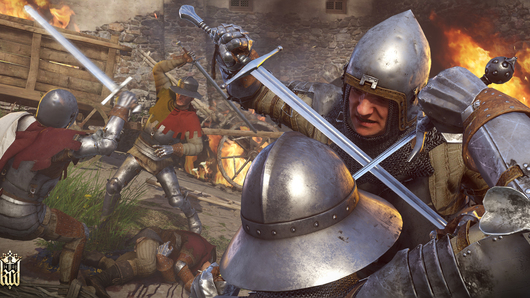 Kingdom Come: Deliverance out in 2018

In early 2014, developer Warhorse Studios announced their kickstarter project for a new medieval Role-Playing game. The game is called Kingdom Come: Deliverance and today a new trailer was revealed with a definitive release date after being delayed. The game was originally slated to come out later in 2017 but Warhorse announced today that it would be coming in February 2018.

Kingdom Come: Deliverance is an RPG that takes place in the Kingdom of Bohemia and was originally kick-started with over one million dollars, and was later picked up by publisher Deep Silver for publishing and distribution. Since then, the game has suffered from several delays with fans wondering when they will see an official release for the title. The game also has a new trailer that was released this morning to show off the story elements and some of the characters.

The trailer depicts the main character, named Henry and his run in with some mercenaries after they destroy his village. There are some more story details about the game according to the official press release from Deep Silver and Warhorse Studios. It states “By bittersweet fortune, he is one of the few survivors of this massacre, after which he takes fate upon himself to help fight for the future of Bohemia, and is dragged into a bloody conflict of a raging civil war.”

Kingdom Come: Deliverance will be released for Playstation 4, Xbox One and PC via the steam platform on February 13, 2018 and will retail for $59.99.

Zach RileyJanuary 27, 2023
Read More
Scroll for more
Tap
E3 2017: How PlayStation, Xbox and Nintendo are Drawing in Audiences
Gamers question reality and meaning of life as Bubsy comes back