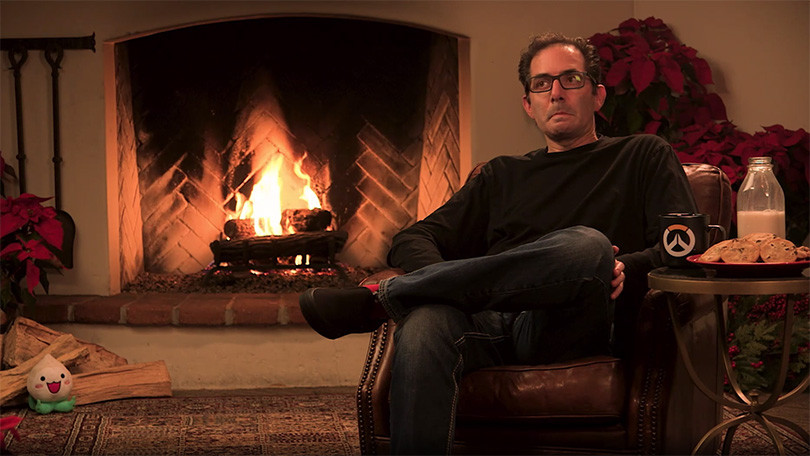 December 24, 2017 saw a very odd Twitch stream done by the Overwatch development team. This could be defined as a massive trolling event or a work of art, I’d go for the former. Jeff Kaplan decided to make an appearance sitting near a fireplace… For 10 hours.

This transmission happened without much fanfare, soon everybody was flocking to the Twitch Stream to watch Jeff Kaplan sitting down and doing absolutely nothing. Also accompanying Jeff were some prop cookies and milk and an Overwatch mug which was revealed to be empty.

I mean, it’s obvious that some sequences during the stream were repeats of others. So Mr. Kaplan surely should’ve left his seat every now and then to spend some time with his family. The transmission itself managed to reach up to 40,000 people with clearly nothing better to do.

There were some highlights that happened during the transmission. Some of them include the moment where Jeff cleaned his glasses after being hit by a boom mic, when he played Hearthstone on his phone, he also received a phone call, and even lit the fireplace with a clap.

The most hilarious highlight must’ve been when Jeff unwrapped a gift. Just beside him was a purple wrapped gift that had a framed picture of Genji saying “I need Healing”.

The frustrating part came near the end when Jeff decided to give a Christmas gift for the fans of the game. He begun talking about a new character that’s going to join the roster in the near future. However, the real troll moment came during his “Announcement”.

So, Jeff said “To say thank you to all of you, me and the Overwatch team are very excited and proud to announced that the very next hero will be-“ And then the stream cuts to a “Technical error” where Jeff suffers a massive lag spike or probably got hacked by Sombra just to add salt to the wound.

And that’s it, Jeff left his seat after 10 hours and the new hero was still unannounced. Everybody has been thrown for a loop and probably got the biggest troll in Christmas Eve. You can watch the full stream right here or look at the highlights with this video below: