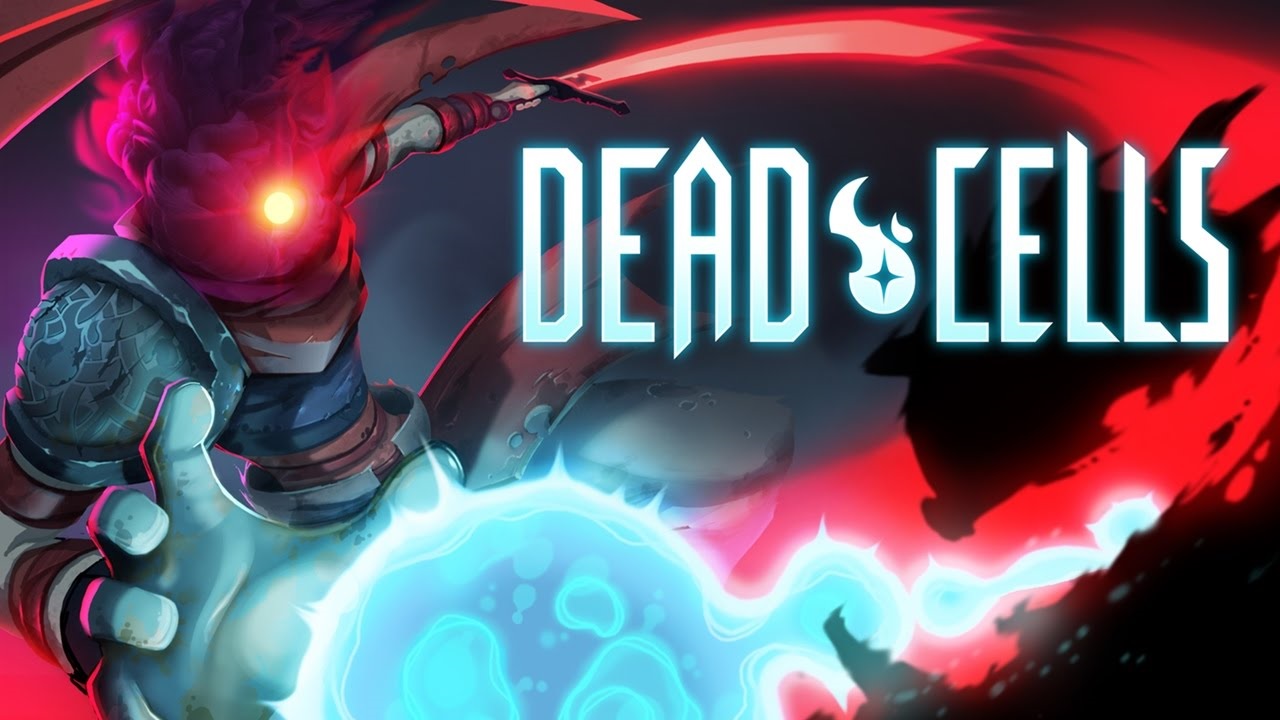 It’s often far fetched to say that something is truly unique in gaming these days, particularly when coming from the indie gaming scene that so often borrows liberally from games of the past. However, every now and then a game comes along that takes things from an established formula (or several of them) and blends them into something that truly IS unique. That is exactly what French developer Motion Twin has managed to do with Dead Cells.

On it’s surface the game looks like just another 2D action game, but the more you peel back the layers the more you realize that it is actually a very deep game. It’s described by the developer as a “roguevania,” which is a mixture of procedurally-generated roguelike games and the exploration-based metroidvania games. It’s a combination that doesn’t seem like it would make a whole lot of sense, but Motion Twin managed to hit it out of the park.

In Dead Cells players control what is essentially a blob of cells that take control of a deceased prisoner, and then must battle through the terrors that lie in wait. Players will collect various weapons, power-ups and money as they progress through the dozen or so levels (called biomes), and if they die then it’s all the way back to the first level to try again. That part about going all the way back to the first level is where the roguelike descriptor comes into play, as you lose the vast majority of what you worked so hard to acquire upon dying. 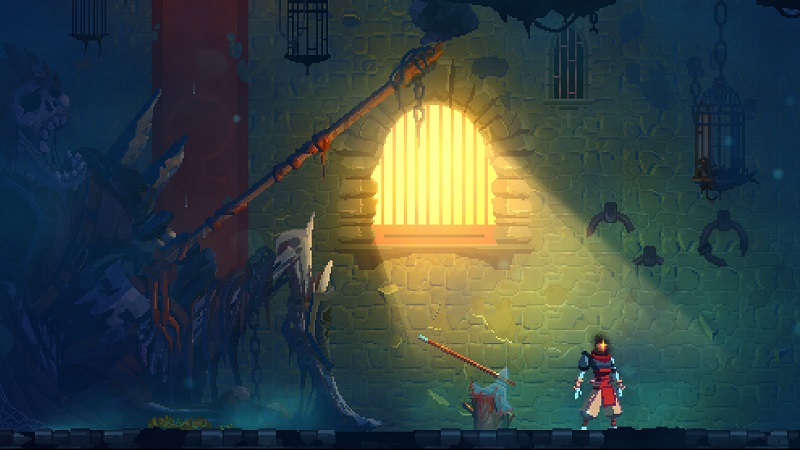 It’s in the little things that actually DO carry over from playthrough to playthrough that truly sets Dead Cells apart from other roguelikes. Even though dying puts you back to the beginning of the game, players will amass items called Dead Cells as they defeat enemies. These cells are put towards unlocking new weapons, abilities, healing flasks, and more, which subsequently makes each playthrough a little bit easier than the last. While dying with these cells in your inventory will result in you losing all of them permanently, if you spend them on upgrades at the safe zones in between levels you get to keep your upgrades.

The metroidvania aspect of Dead Cells comes into play with the various runes that the game has to offer, which you’ll acquire by taking on powerful enemies that are sprinkled throughout the game. While certain paths will be inaccessible at first, getting these runes will eventually change that and allow you to return to and traverse these areas as you progress through the game. These include abilities like being able to run up walls, cause climbable vines to appear and smashing through breakable floor points all to reach new areas or items.

While these are certainly some serious restrictions that need to be heeded, it all hinges on whether or not the game is actually difficult… and is it ever! There are numerous types of enemies in the game and even the most basic grunts have the ability to kill you in a few hits if you’re not careful. Some enemies will drop explosives when they die, and others can shoot you through walls off-screen. It results in a constant tension as you attempt to traverse these levels, as danger is literally around every corner and you can find yourself at the game over screen in the blink of an eye. 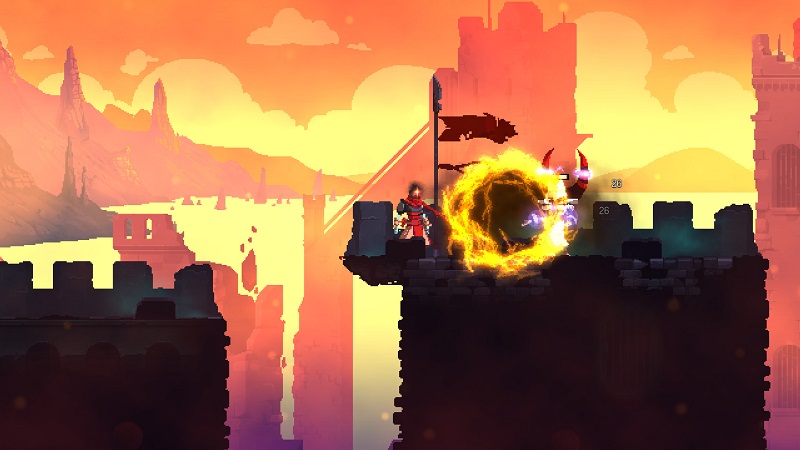 You’ll have a variety of weapons at your disposal to take these enemies down with, which includes the likes of swords, maces, bows, rapiers, magic and much more. While these seem standard on the surface, there are so many different variations of these weapons that come with their own pros and cons that keeps each playthrough feeling fresh. For example: you may come across a sword that also shoots an arrow and burns your enemies, or wield twin daggers that also unleash a toxic gas and enemy-biting worms.

The levels themselves are all mostly very well-designed, which is good considering you’ll be trekking through them countless times in attempt to beat the game. These range from sewer levels containing toxic liquid that you need to avoid at all costs, to creepy dungeons that drain your health if you don’t keep near a light source. They’re accompanied by an atmospheric soundtrack that certainly doesn’t jump out at you as being something you’d listen to separately, but it nevertheless provides a solid and moody backdrop for the adventure.

The regular and elite enemies that Dead Cells has to offer will all give you a run for your money, but we haven’t even touched upon the boss enemies yet. There are a handful of bosses that the game has to offer (some mandatory, others not), and most of them are huge nuisances. Some of them can eventually be figured out as you memorize certain patterns, but the final boss in particular requires so much precision on your part that you’ll need to truly master the game if you hope to beat him. While the boss count might seem low, considering that you need to get through them all in one playthrough makes the boss count perfect in my eyes. 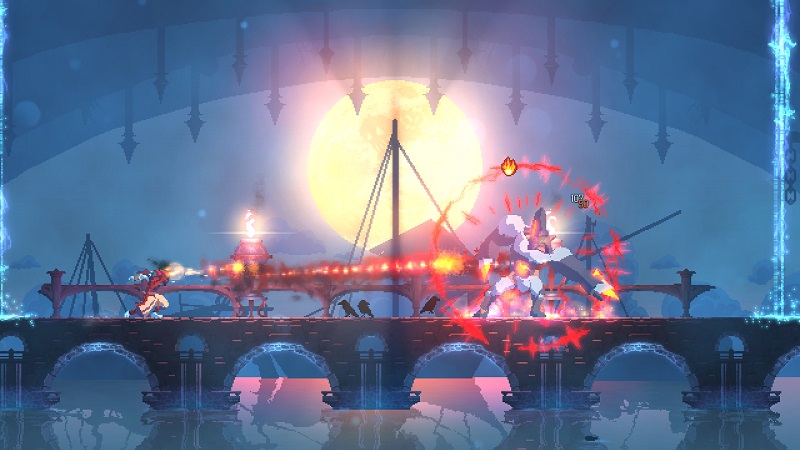 The game isn’t lengthy when you lay it out on paper, but you can expect to spend around a dozen hours with it if you’re planning on beating it. There are playthroughs out there of gamers beating it in under 30 minutes, but you have to be at such a high skill level and have had so much experience with the game that you would have spent many hours with it to even get to that point. While that much trial and error may be off-putting to some, the sense of accomplishment that you get when finally beating a boss or making it to a new level is unparalleled.

Dead Cells has the looks of an old-school indie game, but under the hood it has so many bells and whistles that it stands firmly in the company of any modern game today. Motion Twin did an excellent job of taking familiar gaming concepts and turning them into something new, and the result is yet another indie hit. 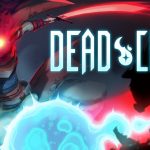