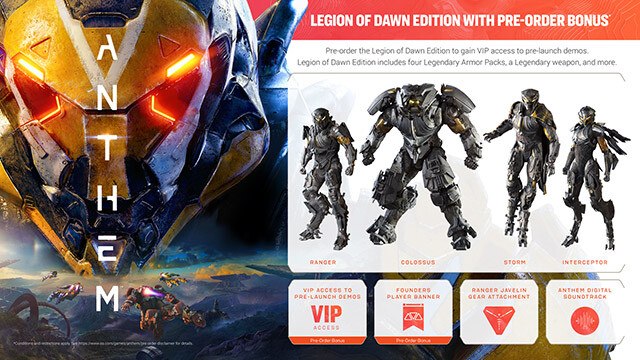 Bioware dropped a new trailer for their upcoming triple-A game Anthem on Friday. This comes shortly after their closed alpha which ended nearly a week ago. The trailer allows gamers to see a bit more into the world that Bioware is trying to create in Anthem. It starts with a voice over while we see characters walking through what seems to be a temple. The woman talking is telling the story of how the Legion of Dawn began. When no one would fight and only one person stood up against the darkness.

The Legion of Dawn seems to be the group that the player is a part of. EA has a page on their website that describes the basics of the Legion of Dawn and how they were formed and created the first Javelins. An excerpt from the page describes it quite well:

“Our world is a violent and cruel place. For centuries, we lived at its mercy, unable to rise above the violent chaos that shook our land and mutated the creatures around us. We would be suffering still, if not for the Legion of Dawn. Under the eye of General Helena Tarsis, they built the first javelins, protected us from the chaos, and created a new future for all those who came after. Their story – her story – is what makes ours possible.”

We’re not completely sure of the entire backstory of Helena Tarsis but the voice in the game describes her as the first to stand against the chaos and darkness within the land. The trailer goes on to announce a Legion of Dawn edition of the game which offers players special suits and weapons. Overall the trailer seems to be very intriguing and put a good foot forward for the game’s release in February.

Zach RileyJanuary 31, 2023
Read More
Scroll for more
Tap
The Failure of the DC Extended Universe
Where Marvel Gets it Right