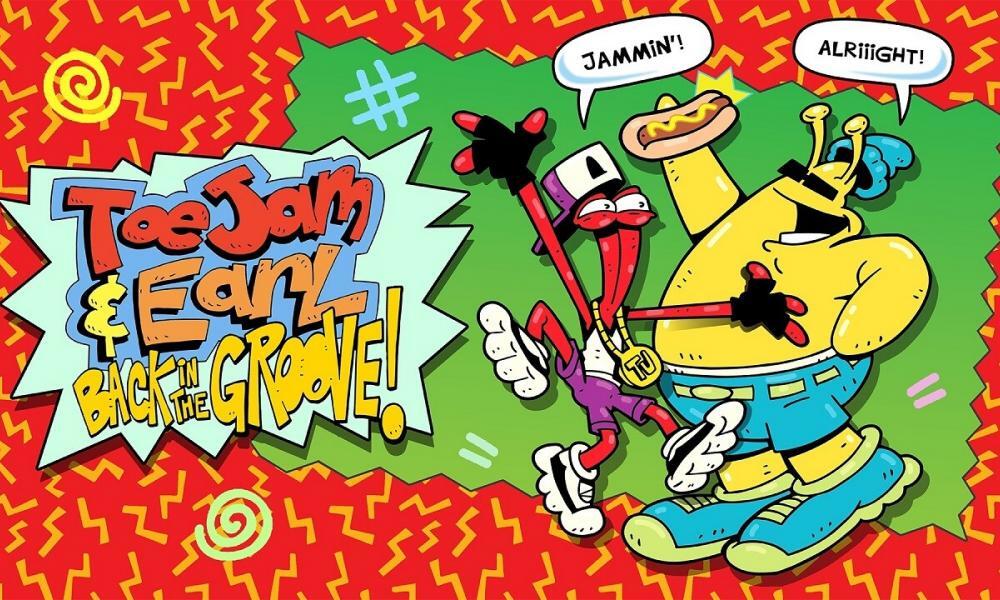 Now that we’re living in the era of crowdfunding, there are several classic game series that are making a comeback that never would have otherwise. We got a spiritual successor to Banjo Kazooie in the form of Yooka-Laylee, and later this year we’re finally getting the long-awaited Shenmue III. However, a new game has just hit the market thanks to a successful Kickstarter campaign, which has brought back the cult classic Toejam & Earl series for a fourth round.

If you’re unfamiliar with the series, it got its start on Sega Genesis with the roguelike original back in ’91 before giving way to a more traditional platformer in ’93 with Panic on Funkotron. The series was dormant for about a decade until a comeback was attempted in 2002 with Mission to Earth on Xbox, though it was a mess and effectively killed the series. Now here we are nearly two decades since then, and old school fans will be happy to know that Back in the Groove takes things back to its roots.

The concept of the game is simple, as Toejam & Earl are tasked with collecting all of the parts of their Rapmaster ship after Earl crashes it following an unfortunate piloting error on his part. Of course, the ship parts have scattered around numerous levels that are filled with evil Earthlings for you to deal with, and they aren’t at all happy to see you. However, Back in the Groove takes things in a different direction compared to most games by actually having you *avoid* enemy encounters entirely for the most part. You’ll instead spend most of your time sneaking around the randomly-generated levels, shaking bushes and trees for XP and presents to help you out. 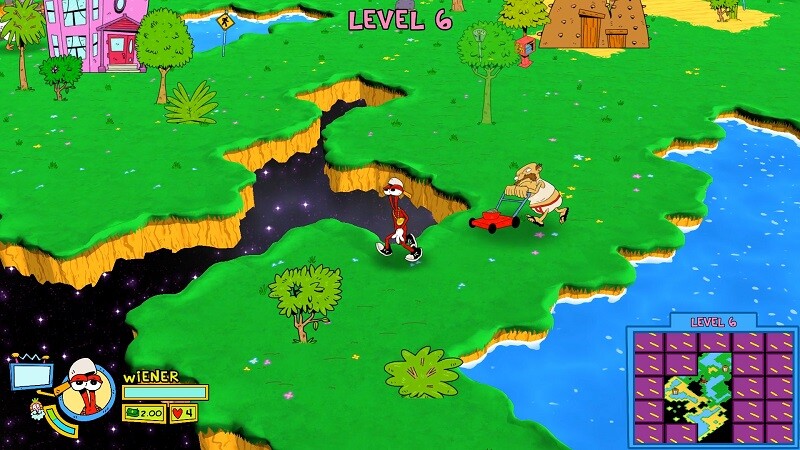 Presents serve as the game’s temporary power-ups that can do a variety of things for you, both good and bad. Some presents will allow you to fly around the level easily and bypass any challenge whatsoever, whereas others will sound an alarm and put a massive blinking sign over you that alerts all of the enemies nearby. Most of the presents that you get will also be unidentified, so you’ll typically be opening them at your own risk.

The game’s enemy variety is commendable, and fans will be happy to know that it contains a nice mixture of both old and new. These include the likes of the invisible Boogiemen, Lawnmower Man and the infamous naked man in a cardboard box. The returning Earthlings are hilarious to see in action, but there are also some new additions that are just as good. One standout is an avid alien fan that chases you around while shouting, “Oh my Gosh, sign my game!”

Despite all of the evil Earthlings that you’ll have to deal with, there are some friendly ones that are sprinkled throughout each level. Some will allow you to level up your stats if you’ve gained enough experience from shaking bushes and exploring the map, while others will heal you or keep you safe from enemies. All of these characters ooze with so much personality that it’s hard not to crack a smile while interacting with them. This is coupled with an excellent funk soundtrack that serves as a perfect backdrop to the wackiness happening on-screen. Fans of the original will hear callbacks to tracks in the first game along with brand new tunes, and it all adds up to background music that is very fun and unique in this space. 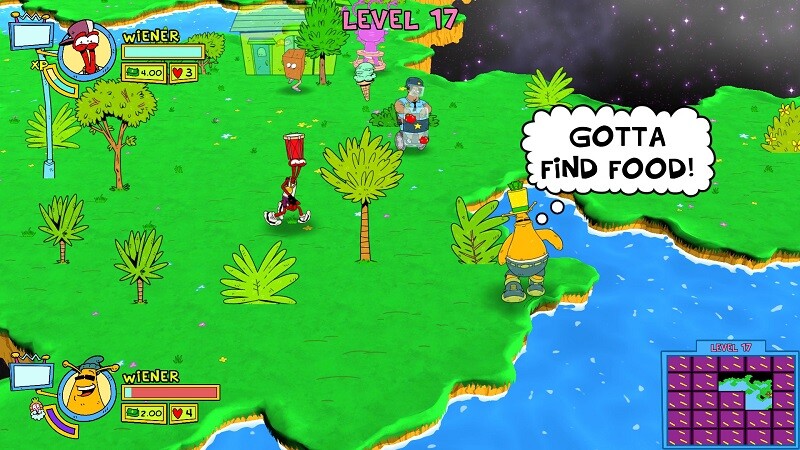 As far as how a typical session of the game will go, you’ll move through relatively small areas looking for ship parts, experimenting with the various presents and avoiding Earthlings. It’s apparent from the onset that the game isn’t so much focused on being challenging as it is just trying to humor you with its various Earthlings. There’s *some* challenge to be had as you have a health bar and can be knocked off of levels that send you back to the previous one, but in my playtime I never once got a game over. This can definitely cause extended play sessions to become a bit boring, as you never really feel threatened and the gameplay doesn’t shake things up as you progress from level to level.

The lack of challenge is disappointing, especially considering Panic on Funkotron had no shortage of it. In that game you would take on Earthlings head-on by throwing jars at them to capture them, though different Earthlings called for different attack methods. There’s really none of that to be found here, unfortunately, as your main strategy is almost always just “avoid the Earthlings.” Thankfully, the developer didn’t forget about the second game entirely, as that game’s terrific Hyper Funk Zone mini game is back. This mini game transports you to a 2D play style as you last as long as you can avoiding obstacles and collecting presents. It’s a load of fun and is easily the highlight of Back in the Groove in terms of actual gameplay.

Another returning element from Panic on Funkotron are the Jam Out sessions, where you’ll essentially be challenged by someone to play along with a beat that they provide for you by pressing buttons at the correct time. The better you do the higher your score will be, which will typically results in nice rewards like presents or money. There are even some freestyle challenges where you’ll have to make your own beat, and the game will judge you based on how complex of a beat you came up with. These Jam Out sessions are nice diversions and are definitely welcomed. 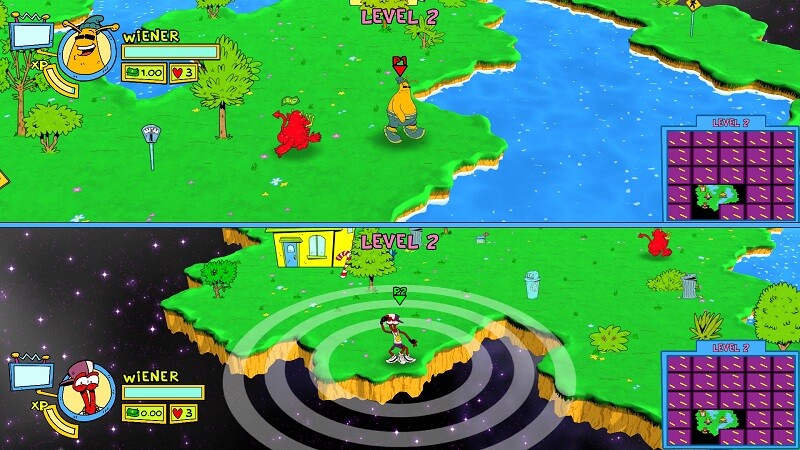 There are 9 characters to choose from in total, each with their own stats that make them better or worse in certain situations. While this is a nice way to spice things up and add some variety, considering the game’s low-difficulty you really won’t find yourself wondering which character is best for your play style or a particular situation. Sure, Earl is slower than Toejam, but this is a moot point when avoiding Earthlings is pretty easy if you’re paying close attention to your surroundings. Of course, if you bring a friend along then that will alleviate some of the monotony. You have numerous ways to call out to your friends if you need help, and can give them a high five if their health is running low give them a boost at the expense of your own. The game even features online multiplayer, so you shouldn’t have any issues finding someone to team up with.

Toejam & Earl: Back in the Groove truly feels like something from a bygone era, which works both for and against it. Developer HumaNature studios did a fantastic job of bringing this world and its zany characters to life, but the gameplay itself is so offbeat that it definitely won’t be for everyone. Still, if you’re into roguelikes and are at all intrigued by the game’s ’90s DNA, then you’ll likely have a good time here.

Toejam & Earl: Back in the Groove 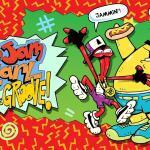 Related ItemsHumaNaturePlaystation 4ToeJam & Earl: Back in the Groove
Gaming

Related ItemsHumaNaturePlaystation 4ToeJam & Earl: Back in the Groove