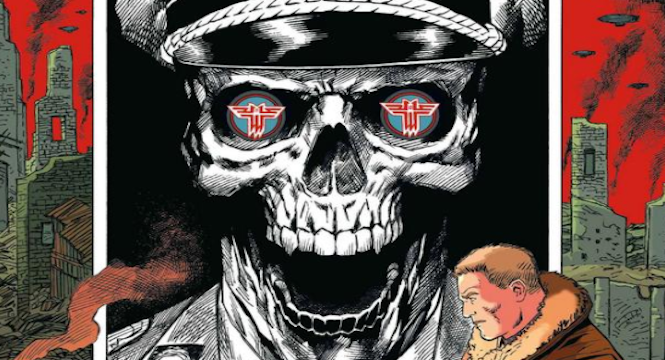 Lately, Bethesda has gained a lot of popularity. Sure, the company became somewhat popular thanks to RPG franchises such as The Elder Scrolls and Fallout, but ever since Bethesda published games like Dishonored, The Evil Within, and Wolfenstein: The New Order (and DOOM, but we’re not here to talk about that game), it has transformed into a household name beloved by gamers the world over. And what popular game developer/publisher doesn’t have comic book tie-ins? Bethesda has teamed up with Titan Comics to create several tie-in comics, including The Evil Within, Wolfenstein, and seemingly out of left field Quake Champions. Yes, the arena shooter with little-to-no story that revolutionized competitive multiplayer FPS games has its own story-driven comic. Ryan O’Sullivan, Ram V, and Dan Watters joined the panel to tell us a little about these comics.

For those of you who were unaware these comics even existed (I counted myself as one of you prior to the panel), each one expands on their respective game worlds. For instance, The Evil Within comic takes place between the first and second game, but it isn’t a standalone story. No, the comic ties into the upcoming game and gives some important character motivations. The comic, much like the game, is intentionally vauge and emulates The Evil Within‘s ability to show things Americans know and fear through a Japanese lens.

Wolfenstein, meanwhile, primarily takes place between the first and second levels of Wolfenstein: The New Order, after B.J. Blazkowicz got his head filled with shrapnel and before he awoke from his coma to resume killing Nazis. The comic dives into the events that happened after Blazkowicz’s little accident, specifically how the Nazis conquered the world; this knowledge is almost essential for Wolfenstein fans, as the game only alludes to and hints at these events through journal entries and newspaper scraps. More importantly, the comic meshes the disparaging elements of the supernatural Nazi zombies and demons from Return to Castle Wolfenstein and Wolfenstein 2009 and the technological Nazi robots, Supersoldatens, and Panzerhunds from Wolfenstein: The New Order. You might not know this, but Wolfenstein: The New Order is actually a sequel to Wolfenstein 2009, which is a sequel to Return to Castle Wolfenstein. In other words, series antagonist General Wilhelm “Deathshead” Strass canonically tried to enhance the Nazi army though occultism and magitechnology pilfered from the long-dead Thule civilization before he passed off stolen Da’at Yichud technology as his own high-tech inventions. But, readers are supposed to take the comic’s story with a grain of salt, as it is told by an unreliable narrator, so we have no idea just how much of the comic is actually canon.

Finally, there’s the Quake Champions comic, the only comic in the lineup not based on a recent, story-driven game. The Quake Champions comic takes place before the first Quake game and explores the characters and game world, giving them depth and context. While the game doesn’t have a proper story, it does have plenty of eldritch, lovecraftian backstory that just begs to be explored. Oh, and apparently while a Dishonored comic also exists, the mind behind that comic couldn’t speak at the panel so I can’t talk about that comic.

I know what you’re thinking: what makes a comic based on a video game better than a movie based on a video game? Well, Titan Comics has a track record for creating well-received licensed comics faithful to their source materials, including Robotech, Doctor Who, and Warhammer 40,000. Furthermore, the creators behind the The Evil Within, Wolfenstein, and Quake Champions comics are all gamers who draw inspiration from critically acclaimed games praised for their stories, including Heavy Rain, Planescape: Torment (haven’t heard that name in a while) and Dark Souls. But, most important of all, Bethesda trusts these comic creators, so much so the company actually sent Watters a full copy of the Wolfenstein II: The New Colossus script and occasionally includes stuff made for the comics in the canonicity of their game franchises. If these acts don’t demonstrate the amount of faith and respect Bethesda has for its comic tie-in creators, I don’t know what does.

Gamers and comic book readers can purchase one or two issues of each of the The Evil Within, Wolfenstein, Quake Champions, and Dishonored comics, and more are on the way. I look forward to the impacts these comics have on gamers and upcoming Bethesda games, including The Evil Within 2 and Wolfenstein 2: The New Colossus.