One of April’s PlayStation Plus Games Already Revealed; Drawn to Death 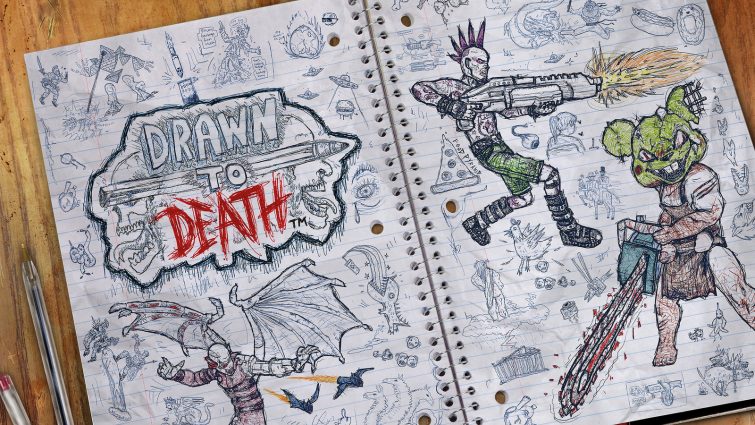 One of April’s PlayStation Plus Games Already Revealed; Drawn to Death

Nearly half a month early, Drawn to Death has been revealed as an April PlayStation Plus title. (That basically means PS Plus members get this one for free.) Gaming legend, David Jaffe, made the announcement today while reminiscing about how he had trouble keeping the news a secret.

Drawn to Death is a third-person shooter/brawler, that resides in a high school kid’s notebook. Very meta we know. Then all of the kid’s drawings come to life and competitive, fast paced, online action gameplay ensues. We always knew that the title would be over the top and contain tactical combat when first announced, but Mr. Jaffe also slipped us some new information as well.

There will be set missions and modes that offer a variety of challenges and rewards. The Sphinx Missions task players with solving eight, battle-focused, riddles and every one solved will provide a new weapon. Character-centric Missions are more of the meat and potatoes to the game. This has fifteen missions for each of the six launch characters and is where you’ll earn costumes and taunts. Additionally, there’s a promise of meeting a Volcano God so count us in.

Mystery Boxes will be rewarded to gamers who play three online matches or for every one hundred and fifty kills achieved. Climb the Tower is your basic tower mode, but with a dark fairy tale theme and stickers as prizes for each level cleared. Lastly, Insane Mystery Special Offer was teased with only a “Destroy my enemies and my life…is yours!” We have no idea what that could mean at the moment.

So PlayStation gamers can expect The Bartlet Jones Supernatural Detective Agency (yes that is a real developer name) title to hit the Store on April 4th. Let us know how you feel about April’s PlayStation Plus lineup so far. Are you more excited or disappointed?