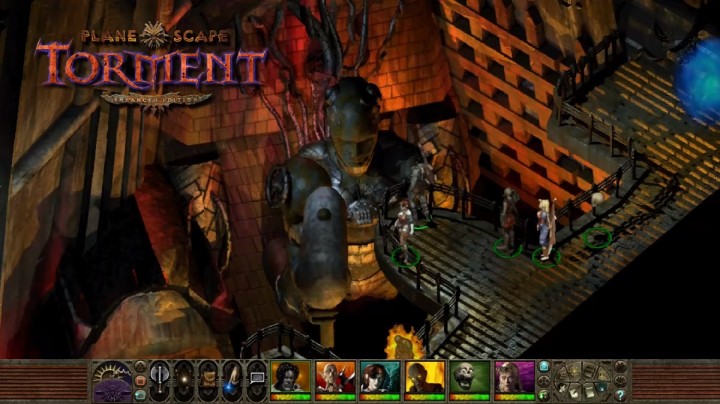 Planescape: Torment is an old PC RPG which was brought to us by Wizards of the Coast who are most known for Dungeons & Dragons, the ever popular tabletop RPG. It was actually based on Wizard’s D&D campaign setting of the same name (Planescape), which is known by roleplayers as one of the most epic, grand and interesting settings to ever grace the genre. It is essentially set between several planes of existence where it isn’t too uncommon to turn a corner and simply run into a god or even two. Planescape: Torment was originally released in 1999 and was following in the footsteps of that other huge D&D based RPG, Bioware’s Baldur’s Gate.

It was a revolutionary story for its time and many regard it as one of, if not, the best RPGs ever made. The good news is that if you missed out on this beloved RPG gem or are looking for a reason to return then fear not because Planescape: Torment is getting an Enhanced Edition re-release. Much like Baldur’s Gate 1 and 2 which have had an enhanced edition for quite some time now, Planescape is receiving the same love courtesy of Beamdog.

Planescape: Torment: Enhanced Edition will also have some new features such as changes to the UI to improve the “feel” of the game. The game will apparently feature “No load times”, a zooming feature and a “high definition interface” according to Beamdog. Most interesting of all is perhaps the fact that it will be releasing on tablets/mobile devices as well. As well as releasing on Steam, GoG, and Mac it will also be appearing on the Apple App Store, and Google Play. On the one hand being able to play such an awesome game on a tablet might certainly help those with less time on their hands experience it. On the other, it doesn’t seem like the sort of title that would adjust itself nicely enough onto a touch screen format, though it is too early to make any quick judgments. The desktop versions will be priced at $19.99 and the mobile version at $9.99. . It will release on April 11th, 2017.