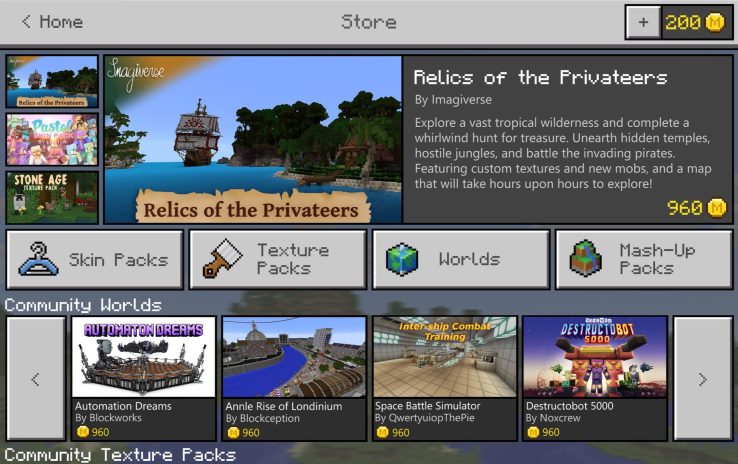 There are many Minecraft players out there who are astoundingly creative. Some of them are even prolific creators who almost always have a new work of pixel art up their sleeve. They are also kind enough to share them with fellow players for free. But now, things are going to change with the upcoming update to the game: Minecraft Marketplace

This spring, developers are rolling a new batch of changes with the so-called Discovery Update. Several new features are making their way to both PC and Pocket versions. However, there is one that stands out the most: the Minecraft Marketplace. It is an in-game store where creators can sell items such as skins, maps, texture packs, and others for real world-convertible money.

The team behind the game already have a select list of users whose creations will be present at the launch of Minecraft Marketplace. However, they also said that other creators can submit their merchandise once they have a registered business. In fact, there’s already a procedure laid down for player-creators who want to make a living out of their creations in the game. To be able to apply, Microsoft has three requirements: they have to be actual business entities, they must be able to show a portfolio of high-quality Minecraft content, and they should love Minecraft and be creative for the game.

Minecraft’s monetizing aspect is also very appealing to creators. Not only can player-vendors name their items’ prices, the platform only takes 30% from a sale and the shop owner can keep the rest. To streamline that, Windows, Mojang, and their partner developers are introducing Minecraft Coins. It is similar to other in-game currencies, in which they are used to purchase items from sellers.

Minecraft Marketplace the beta version will be available for Android devices this April. It will be a testing ground for Coins but nobody can buy and sell anything yet. That will be added later on this spring. Meanwhile, the Minecraft team will be holding a Reddit AMA on April 20 from 9 am to 12 pm PST.