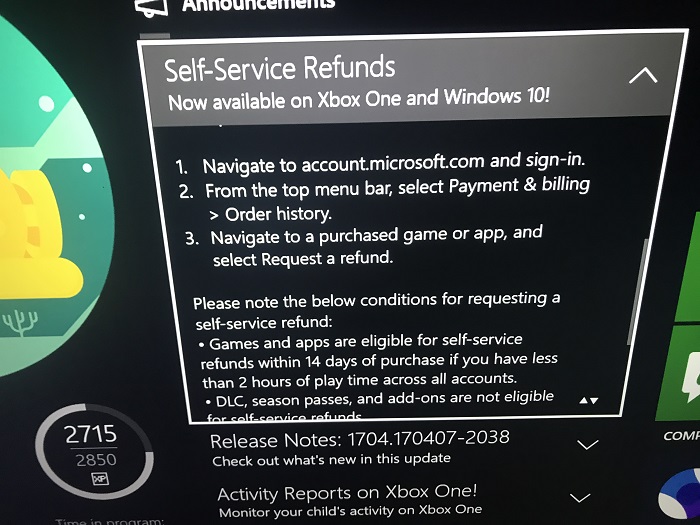 For the longest time I was a staunch believer of personal responsibility. If you bought a physical version of a video game, then you were stuck with it even if you disliked the title. Then the gaming industry changed when Amazon and Gamestop made it easier to get some resale value off your purchases. Although it must be stated the latter has never really been consumer friendly. After that the introduction of digital titles once again changed the market. Kind of hard to refund a bunch of code after all. Finally, Valve and Steam found a way to incorporate refunds and remove titles from PC gamers’ collections. One would assume they were able to do this because of the ever changing hardware/software that computer gaming brings. Well, no more according to Microsoft as they’ll soon be offering full refunds for the Xbox One.

In case you missed the news, because you’re playing all the amazing games Q1 of this year has to offer, a recent Xbox One dashboard image leaked from an alpha ring of testers. It stated that Microsoft would offer full refunds on their console and Windows 10 titles within fourteen days of purchase and two hours played. Incidentally, this came out shortly after my article on why I prefer PlayStation to Xbox. In that piece, I describe Xbox’s lack of games, Microsoft’s treatment of developers with its ‘Parity Clause,’ and how they’ve failed to take care of gamers as a whole. Well, this recent announcement takes true aim at the latter problem and I love it.

It goes without saying that refunds for purchased downloadable titles is amazingly consumer friendly. The process gives gamers an extra padding of comfort in case the titles they buy are broken, not as advertised, or just an all-around disappointment. Hell, I could have used that for Alpha Protocol (but not for No Man’s Sky and that’s an entirely different subject). So basically you aren’t left out to dry if your potential sixty dollar purchase wasn’t up to snuff. Unfortunately, I’ve read some horror and stupidity stories for people trying to get a refund on a PS4 digital purchase. 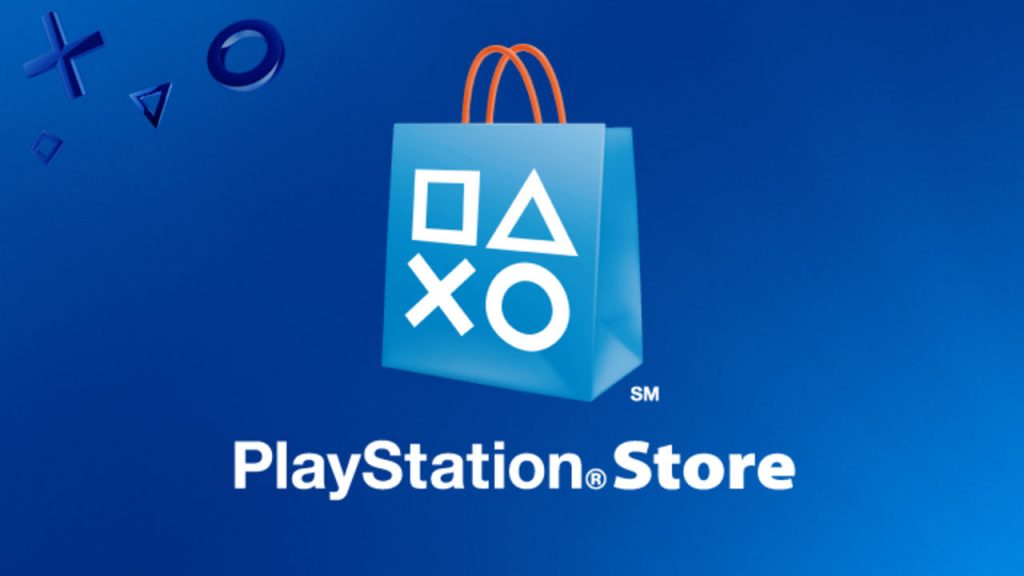 Let me first state that every time I’ve contacted PlayStation customer support, I get courteous and professional help. Although the only time I ever tried to get a refund was when the Store acted up and made me purchase a year of PS Plus three different times. Luckily, support refunded me the two extra purchases and all was well. However, they probably saw on their sheets that I buy a lot of stuff off the PlayStation Store and figured I would spend that extra $120 anyhow.

Still I’ve seen all across the internet many people being refused pretty bluntly for digital refunds. From a game not being as advertised to someone playing a title ten or more hours and expecting their money back. The closest I’ve seen a full game refund going through was giving the money back to someone, but banning that person from ever acquiring the license to the refunded title again. While that makes sense and seems proper, it’s not exactly consumer friendly and I’ve only seen it happen on rare occasions. I get it though. Refunding digital titles is a new prospect and can be abused. I guarantee that Sony’s executives worry a title can be completed and then requested for a refund. Sadly, that excuse won’t fly anymore with what Microsoft has planned.

Not only is the Xbox One refund policy good for competition, but it’s amazing for gamers everywhere. This by no means makes up for Microsoft’s sins of old (described in the article hyperlinked above), but it’s certainly a giant step in the right direction. If they can continue making announcements like the Scorpio specs and digital refunds then I may actually grow to respect the Xbox brand.

Times and technology are constantly changing. If the competition can figure it out, so can Sony and its PlayStation division. If anything mold your refund program after Xbox’s. They seem to have every aspect figured out with what qualifies for refunds, what happens if you abuse the system, and more. If you truly believe “This is 4 the Players” PlayStation, I’m waiting eagerly for your next announcement on refunds coming to the PlayStation Store.

How do you feel about Xbox offering refunds for digital purchases? Do you want PlayStation to follow in their footsteps sooner rather than later? Let us know in the comments below!