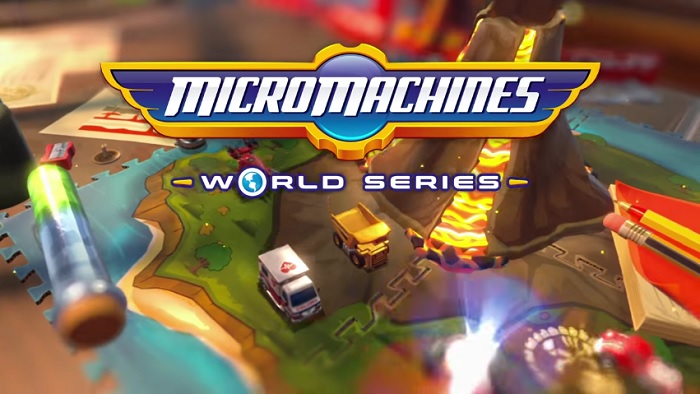 The Micro Machines franchise can easily be considered a cult-classic. As such quite a few die-hard fans are awaiting for information about Micro Machines World Series which releases this June. Luckily, Codemasters and Deep Silver have released the very first gameplay trailer for the latest title in the series. It goes without saying that the races and battles depicted will be very destructive. You can check out the video below.

“Micro Machines World Series is a fresh new take on the franchise that is great fun for previous players and those new to Micro Machines,” said Executive Producer, Chris Gray. “It’s a firm fan favorite and we are delighted to be bringing it to the PS4, Xbox One and PC. In addition to the return of the classic Race and Elimination modes, we are extremely excited by the new Battle Arenas. Having 12 players in the same match, all fighting it out with a variety of vehicles and crazy weapons is great fun. Gamers are going to love it.”

One of the key aspects of Micro Machines World Series is the possibility of having twelve player online racing. Not only that, but there will be competitive modes like Capture the Flag, Territory, and Team Deathmatch. You’ll be able to take your car mayhem across fifteen different arenas including a Hungry Hungry Hippos map. No we’re not kidding and it’s even in the trailer above.

Each vehicle, from the Spy Car, Hovercraft, Monster Truck, and G.I. Joe H.I.S.S. Tank, will be fully customizable. You’ll be able to select weapons like Dynamite Launchers, Tidal Wave, Cobra Turrets, and NERF Blasters while choosing one of the many skins available. Additionally, there are emotes, victory poses, and grave stamps to collect as well. There’s bound to be quick a mix-and-match of toy cars.

Micro Machines World Series will release on June 23rd for the PlayStation 4, Xbox One, and PC and is being developed by Codemasters, which has been around since the 80s. What are your thoughts on the mini franchise returning for next-gen systems? Are you a fan of the cult series? Let us know in the comments below!