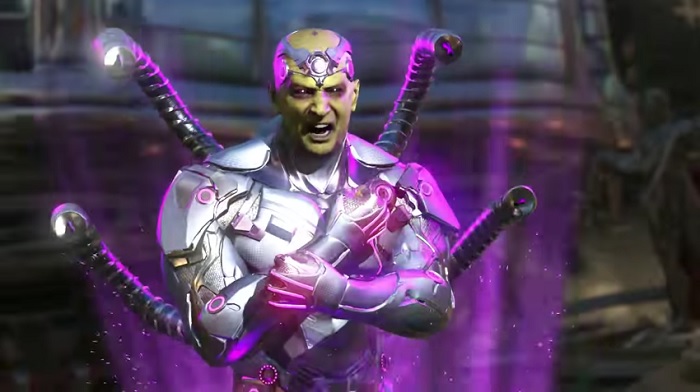 Last week we finally got ourselves a look at Injustice 2’s main villain, Braniac. We found out why he arrived on Earth in the midst of Superman’s regime making a comeback and the newly formed Society. Also, people seemed to really enjoy Black Canary’s “holy sh–” moment. Regardless, NetherRealm Studio’s take on the big bad was both true to Braniac’s character and something a little different. Especially in the small moments of combat gameplay in last week’s trailer.

Today, we get a full combat trailer dedicated to Braniac and his movesets. You best believe those tentacles and/or probes play a big part in his arsenal. He also has a few projectiles attacks from the side and above. Let’s just hope those won’t be spammed or exploitable in any bad way. Lastly, Braniac’s super essentially boils down to holding an opponent on the ground via robot clones as a giant energy blast rains upon his enemy from one of his ships. It may not be the most visually stimulating, but it sure looks powerful. You can check out the footage below.

“Brainiac is a megalomaniacal genius who roams the universe, collecting knowledge to increase his intellectual and scientific prowess. Obsessed with establishing his superiority, Brainiac captured Krypton’s greatest cities, then eradicated what remained…or so he thought.”

Additionally, we have to give props to one of the comments who brings in an Avengers reference when Gorilla Grodd tosses Braniac around like the Hulk did to Loki.

Injustice 2 is being developed by NetherRealm Studios and being published by WB Games. The sequel will release on May 16th for the PlayStation 4 and Xbox One. We’ll see if Braniac brings a bigger threat than the evil Justice League did in the first title. I’m certainly looking forward to his gear set since they’re customizable in this game.

Are you excited for Injustice 2 and the oncoming threat of Braniac? Do you think the alternate dimension’s Superman will realize the error of his ways when he confronts Braniac’s world destroying plans? What aspect are you most looking forward to? Let us know in the comments!

Mike GuarinoAugust 28, 2020
Read More
You Now Need to Provide Your Phone Number to Play Ranked in DOTA 2
Save up to 40% on Board Games with Amazon