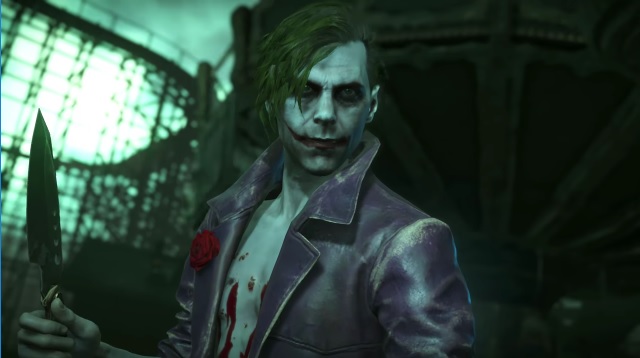 It seemed like only a matter of time before NetherRealm and WB Studios released a confirmation of Joker being in Injustice 2. Especially after the recent leaks of the Clown Prince of Crime making his way to the fighter. Well they officially announced the Joker today with his own introduction video. In it he completely owns Superman and the poor boy wonder, Robin, who is the Tim Drake incarnation. I mean just check out his brutal super move.

We also find out that the Joker isn’t really alive thanks to the video’s description. He either appears in the same instance as Darkseid (just a playable character with not plot repercussions) or he shows up in a dream or hallucinogenic state. Let’s just hope that Injustice 2 didn’t force Joker in here due to his popularity. That might hurt his addition in the long run. It’s also hard to say, but it appears that Mark Hamill will not be reliving his most famous voice acting role.

“Though killed by Superman, the Joker continues to haunt the lives of all those touched by his madness. By destroying Metropolis, he set the events in motion which made enemies of Superman and Batman. If he were alive to see the chaos he’d created, he would surely be smiling.”

Injustice 2 is being developed by NetherRealm Studios and will release for the PlayStation 4 and Xbox One on May 16th. What are your thoughts on Joker being officially confirmed? Do you worry that he won’t have a proper place in the story? Let us know in the comments below and as always let me know how awesome Batman is.