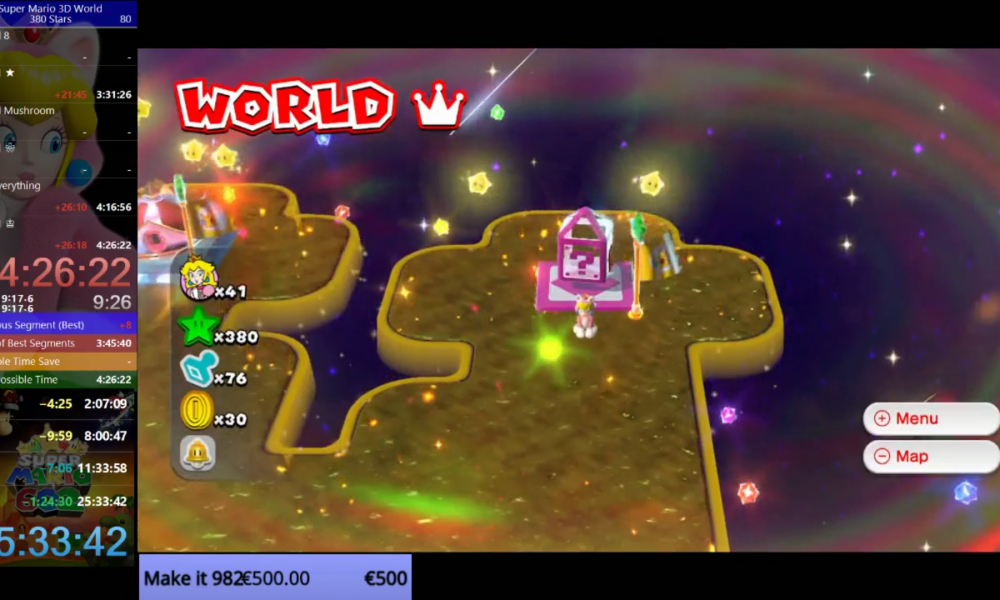 The run ended at a little over 25 and a half hours!
Mario Speedrunner Sets New 982 Star Record Across 5 Games

The runner also has to complete all these games in succession with no more than an hour of breaks.

After breaking his own 602 record with a 21:3:52 run, viewers met a 500 euro donation goal for Vallu to go for 982. Sticking to his word, Vallu queued up Super Mario 3D World, looking to break his previous record set last year of nearly 27 hours. This year he shaved it down to 25 hours, 33 minutes, and 42 seconds.

To get an idea of how grueling of a task this is, Vallu actually fell asleep near the end of the Super Mario 3D World run. He claims he doesn’t even remember what happened during. He also at one point collected a star he had already gotten.

By breaking his own record, he continues to hold both the 602 star record and the 982 star record. 17 other players completed the run, with second place finishing nearly 40 minutes after Vallu. 17th place completed in over 36 hours. Vallu is currently the only speedrunner on record to complete the full 5 game run, so it doesn’t look like this record is going to be broken anytime soon (unless he does again).

If you have about a day and some change, you can watch the entire run here! Follow Vallu111 on twitter here!

Lucas Museum of Narrative Art Approved by the LA City Council
PlayStation 5 Release Info Given: And Will Console Be More Customizable?