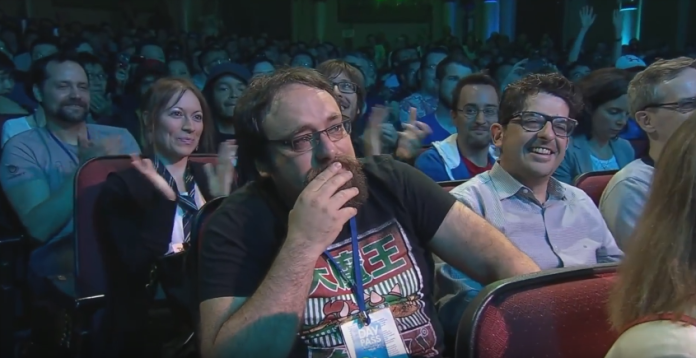 One of the best moments of E3 wasn’t necessarily a game reveal, though it did come during one. Viewers of the Ubisoft conference will remember a heartwarming moment between Shigeru Miyamoto and Davide Soliani, when the Nintendo legend talked about working with the Ubisoft developer on Mario + Rabbids: Kingdom Battle. Soliani could barely hold himself together, waving to the camera and holding back tears as he thanked Miyamoto.

This was the end of a mo20-year 20 year long journey Solani took in Miyamoto’s footsteps towards this game. In an interview with GamesIndustry.biz, he talked about the Nintendo developer’s influence on his career. “Miyamoto-san is the main reason why I do this,” he said. Soliani met Miyamoto after the release of his second game, Jungle Book: Mowgli’s Wild Adventure for the Game Boy:

“I was super proud of it. I remember a review saying that it seemed like a Nintendo game. So the first time I went to E3, I brought my Jungle Book game and I met Miyamoto. But I was so shy, like a little kid, that I just gave him the game and asked him to sign it, without even saying hello, presenting myself and explaining that this was my game. So, Miyamoto-san looked at the box like: ‘Hmmm, this isn’t my game.’ But he signed it anyway because he is such a gentle guy. When he gave me the signed game, which of course I still have, I went out of E3 and cried like a baby.”

In 2002, on a press tour for Wind Waker, Miyamoto came to Milan, where Soliani lives. Soliani called every four and five star hotel to find out where Miyamoto was staying. He waited in the rain for hours until he saw Miyamoto, and he gave him all of Ubisoft Milan’s games. “I’m clearly quite crazy. I am a fan. I recognize that it’s not super rational.”

Soliani was again able to meet his hero in 2014, when he pitched the game to Miyamoto at E3. Miyamoto was impressed with the game, as well as Soliani.

Soliani got to work with another hero, Grant Kirkhope, composer for Banjo-Kazooie and Donkey Kong 64. It turns out, however, that Kirkhope was just as overwhelmed with the project. He thought he was being brought in to compose for a new Rabbids game, so when he found out Mario was involved, he was shocked into silence. “It struck me… how on earth was I going to write music for Mario after Koji Kondo, who is the greatest games composer in the world?” He continued, “It was super exciting, but it was massively scary. Getting to touch Mario in any capacity… it’s the holy grail.”

Leading up to this past E3, worries of fan reception scared the team. After all, it is a mix between Mario, Rabbids, and XCOM. When a little information on the game leaked, fans were sceptical as to how it would be received by Mario fans like him:

“When the game leaks, no one is happy. Also, let’s be honest, the reaction at the beginning was not ‘sceptical’ – it was a little bit worse than that. It was quite hard on the team morale to read some of those comments.”

Soliani even told his team to “prepare for the worst” at E3. All of that trepidation melted away, however, when Miyamoto walked on stage. The reaction from the audience was strong, and Soliani found himself overwhelmed with emotion. “It took me like two weeks to process what had happened. After the conference, we were walking the streets and people were stopping us and congratulating us.”

Mario + Rabbids: Kingdom Battle received 37 E3 award nominations, but that certainly pales in comparison to getting the opportunity to work with your industry heroes and an industry-defining series.

Zach RileyJanuary 31, 2023
Read More
Scroll for more
Tap
A Closer Look at Doomfist and Characters Born from Nothing.
Telltale Games Announces New Seasons for Batman, The Walking Dead, and The Wolf Among Us