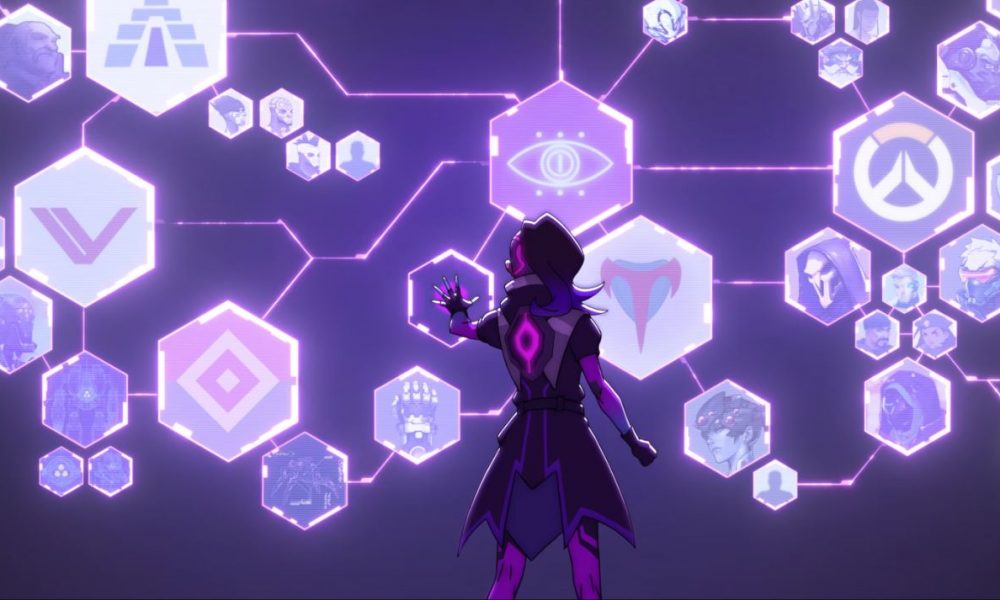 Sombra, real name, unknown. To the world, she doesn’t officially exist. Skills include computer hacking and cryptography. Her story is a hacker’s cliché. Orphaned by killer robots, recruited by a well intentioned Mexican gang, hacks an international conspiracy, and goes into hiding. She emerges a year later, a sexy, cyber punk hacktivist. Hold on, that’s not a hacker cliché?

Regardless, that’s exactly what Sombra’s story is. Ever since her family was killed in the wake of the Omnic Crisis, she turned to hacking. It was her intention to bring peace to a worn torn Mexico. She hacked politicians and police commissioners; not only to reveal their evil deeds but also to gain new knowledge. One might say that she had an addiction to information. It was this fixation on learning on learning the world’s secrets that put her in a compromising situation. As unveiling, a worldwide conspiracy is wont to do.

And so, like a scene from Mr. Robot, the girl “formerly known as” got rid of all traces of her existence and went into hiding. For awhile at least. It was during her time in seclusion where she donned her hacker moniker and enhanced her inferior human flesh with cybernetic implants. Thus the girl was gone and Sombra was born. Even more determined to unveil the network of shadows pulling at the world’s strings.

Certain exploits under her new identity drew the attention of a variety of groups, including Talon. Talon is an extremist terrorist organization (depending on who you ask), led by former Blackwatch commander, Gabriel Reyes. To further her own quest for the truth, she joined their ranks. She views her time in Talon as a means to an end. A way to help uncover the secrets of the global cabal she stumbled upon all those years ago. I guess when someone destroys your life, you’re bound to have a vendetta against them. An itch that can’t be scratched, so to speak.

While on a mission in Russia, Sombra seized an opportunity to relieve that itch. If only temporarily. The assignment was to assassinate Katya Volskaya, the CEO of Volskaya industries. The hero of the Russian people. Things went awry when Sombra chose to take things into her own hands. She purposely triggered the alarm system to reveal Talon’s presence. But why compromise the mission? Well, because of a damning piece of evidence in her possession.

It turns out that the most powerful woman in Russia, who swore to protect her people against the Omnics has dealings with the enemy. Sombra decides to use this information as leverage and blackmails Katya. The two form a “friendship” based on extortion. Sombra vow not to reveal the career ending info as long as Ms. Volskaya does her a favor every now and again. As solid of a foundation for a friendship as any!

We’re all caught up on past events, now we’ve arrived at the real reason behind writing this article, technology. Specifically, Sombra’s technology. With tech that lets her hack the planet, vanish like Harry Potter, and teleport like Kirk and Spock, how can I resist dissecting it all as a nerd and former IT professional? Rhetorical question, I can’t.

Let’s start with the right mouse-button ability, hack. The hack skill allows Sombra to disable character’s abilities for 5 seconds. This brings me to my first question: How is Sombra able to access literally every character’s technology? And she does it within 0.8 seconds. How is it possible?  This question led me another video games that posed some of the same issues, Ubisoft’s Watch Dogs. You travel the streets of Chicago as master-cyberhacker, Aiden Pearce. But, this got me questioning his ability to hack a security system without batting an eye.

As I sifted through the lore of Watch Dogs, the answer came to me. In the game, Chicago put into place the ctOS, also known as the Central Operating System. The ctOS is a supercomputer that interconnected the technological world of Chicago. It’s the interdependency that lets Pearce hack everything with the touch of a button. Once the ctOS has been analyzed and infiltrated he has access to everything on it. Its greatest strength became its greatest weakness.

The idea of a central operating system is the perfect answer. After the Omnic Uprising, it seems likely that all the old systems and A.I.s were shut down. Meaning the creation of a brand new system. An operating system that is connected like the ctOS of Watch Dogs. That means, for a hacker of Sombra’s caliber, that once inside the system, she has unlimited access. Access which lets her into every character tied to the global network. Mystery solved.

But, that’s hardly the only question I have concerning her hacking abilities. For example, Sombra is able to hack Torbjorn’s IFF-tracking turret, but not Soldier 76’s auto-aim visor. They’re both technologies. So, why is that? After countless hours of research, I couldn’t find an answer. One doesn’t exist. At least not in the Blizzard lore. The only search results that came up were guides on how to play Sombra. Comprehensive lists on what she can and cannot hack. Not a single explanation as to why she can’t hack certain tech.

So, instead of looking to Blizzard for a logical explanation, I decided to look into real life hacking. And so down the rabbit hole, I went. Reading about the limitations of hacking, the moral code, hacking prevention, watched Zero Cool crash 1,507 computer systems in a single day…wait, I may have taken a wrong turn somewhere. I learned some things about hacking that likely put my name on a NSA watch list. But, I found my answer.

It came to me in a coffee induced stupor. While reading through ways to prevent unauthorized access to your personal system, I read something so obvious it didn’t sink in at first glance. If trying to prevent a hacker from accessing your system, the (non-conflicting) counter measures you have, the harder it is for them to get in. It’s a common sense solution, and something I’ve had to explain to many clients.

Say you have a two-factor authentication, an up to date operating system, a current anti-virus, and an active firewall. Those measures make it much harder to breach the system’s security. It takes a hacker much longer to infiltrate a PC with all of those precautions than it does a computer that only has a firewall. They’re going to go through a lot more Doritos and Big Gulps. The answer to my big question boiled down to one word, time.

Take D.Va for example, Sombra’s inability to hack D. Va’s mech while it’s self-destructing. There’s not enough time between the activation and the detonation for Sombra to be able to 1. analyze the security 2. access the system and 3. disable the explosion. Especially under enemy fire. Nor is she going to have the luxury of disarming Junkrat’s Rip-tire as it turns you and your teammates to ash.

So after all my research, too many cups of coffee, and hair loss due to stress, it came down to something as simple as time restraints…dammit.

Before I spiraled further into a pit of despair, I decided to move onto Sombra’s second piece of next-gen technology, the translocator. This is a piece of equipment stolen from Winston’s lab at Gibraltar. It allows Sombra to teleport around with the blink of an eye. To truly understand what makes the translocator tic we have to understand a little about the quantum mechanics behind teleportation. Yay science!

Beam Me Up Sombra

The teleporters on the Starship Enterprise divide your molecules and assemble them in a new location. The newly constructed you looks like you and acts like you but, isn’t actually you. By all definitions, this is a clone. One that has all of your thoughts and memories. Your matter was ripped apart at the molecular level and used to fuel a battery that proceeded to make a copy of you. This happens every single time someone is teleported in Star Trek. That means there are thousands of uncounted deaths by the hand of the Galactic Federation. Way to go guys, you’ve been committing mass genocide.

A Quantum Leap to the Left

The type of translocation that Sombra uses states that it is impossible to create an identical copy (in a quantum state) without changing or destroying the original copy. What that means is no clones. And, no turning people in a soylent green type fuel. Quantum teleportation, instead of physically moving atoms, moves the information about the state of the atom from point A to point B. It does this without any information actually moving in between the points. What this means for Sombra is that her translocator scans her molecular information and teleports it to wherever the translocation beacon lands. The information compiles and becomes Sombra once again.

While the ability to transport humans via teleporter is still science fiction, it is theoretically possible. After all, there’s nothing in the laws of physics that says otherwise. Put that in your juice box and suck it, Einstein!

So we’ve explored Sombra’s hacking abilities, and the way her translocator works. That just leaves her cloaking device. Is it magic from the Wizarding World of Harry Potter? Or perhaps something more science-y? Its probably not magic…right?

Meet the Rochester Cloak, an invention cooked up at Rochester University. Hence the name. This device uses four lenses placed at specific distances to bend light around an object. Making it invisible. The item must be placed in the center of the lenses to make it disappear. While highly effective, it’s not likely that Sombra’s is going to carry around human sized lenses and placing them throughout the world of Overwatch. Seems like a lot of work for a little payoff.

It’s far more feasible that Sombra is using something closer to quantum cloaking technology. You can find prototypes of this tech in a variety of labs around the world. One such lab, at the University of Toronto, developed an active quantum cloak. The idea behind active cloaking is surrounding an object with a single layer of tiny antennae. This layer radiates a field that cancels out the reflect from the item. It turns the object almost fully invisible. With Overwatch being set in the future, quantum cloaking has probably been perfected.

Quantum cloaking sure beats a cardboard box when trying to hide from the enemy. I ought to box up Solid Snake and ship him off to the Caymans.

So, there you have it. How to become a cyberpunk, hacktivist. Theoretically. Until next time, see you space cowboy.